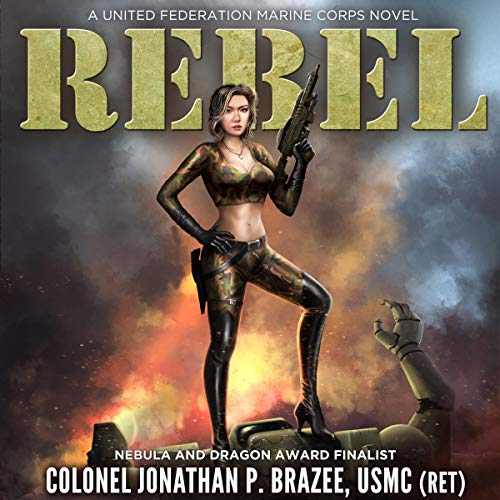 Michiko MacCailin is a member of the First Families, more concerned with her privileged lifestyle of ballet, spending time with friends, and planning her wedding than of the injustices suffered by the indentured workers of the all-powerful Propitious Interstellar Fabrication, Inc., the charter holder of the planet. When her activist fiancé is murdered at a protest rally, she blames the company and embarks on a personal mission of vengeance.

Michi has some initial if minor success, but when the company requests that the Federation send in the marine corps to quell the unrest, the stakes immediately get higher. Undeterred, Michi is willing to take on the marines if that is what it takes to achieve her revenge.

WARNING: This book contains some graphic violence that may not be suitable for all listeners.

Author's note: Rebel is set in the same universe as the first three books in The United Federation Marine Corps series, and a few of the characters in those three books make brief appearances in this one. However, this is a decidedly different book, examining what it might be like on the other side of a Federation Marine deployment. The battle scenes are limited, and the violence is much more visceral and personal. This is a darker, deeper book and not your typical "space marine" story.

Rebel will tie in to future volumes of the series that will put the focus back on the marines, but it is a departure from the first three volumes.

What listeners say about Rebel

the narrator absolutely RUINED this book!!!

No one can enjoy this book til they get another narrator...
This is the worst narrator I have ever listened to...
I will NOT buy any book with this narrator ever again...

Has Rebel turned you off from other books in this genre?

I have the other books and enjoyed them...BUT this narrator has RUINED this book...
She could Pronounce simple words...
HER voice grated on my nerves...
I will not buy any book with her as a narrator...

A different narrator that could actually read and talk properly...

Get rid of that narrator! !!

Mixed feelings not as enthralled in it as original series. tried to tie it together mid book.