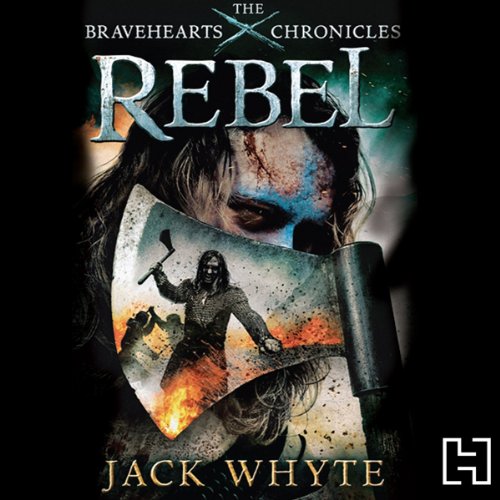 A.D. 1305, an hour before dawn, London's Smithfield prison: In a dank cell, the outlaw William Wallace waits to be executed at first light. He is visited by a Scottish priest who has come to hear his last confession - the confession of a life even more exciting, violent and astonishing than the legend that survived. From internationally best-selling author Jack Whyte comes a story of brutal battles and high adventure, of heroism and redemption - the story of William Wallace as the world has never heard it before.

What listeners say about Rebel

A great rollicking yarn of 14th Century Scotland. The author a personal favourite from many years back with his Saxon Shore series.

The find of the book however is the narrator. Wonderfully diverse and thick scots accents BUT absolutely clear and understandable even with my moderate hearing loss. The story involves the early life of William Wallace before Sterling as told by his cousin priest.

One of my favourites.

A surprising jewel in the crown

I wasn't sure why this title caught my attention but I always enjoy historical titles. The book tells the story of William Wallace's life , from his childhood, to his inevitable entry into the war with the English Monarchy and throws a different light onto many facets of the story we all think we know.

Whilst the content of the book is excellent it can sometimes get a bit difficult to remember the names of all of the scottish lords that are referred to. That said, it is still easy to follow the plot and the main characters surrounding Wallace are vivid, facinating and believable.

For me though, the highlight of the book was the narrator. After after a vey short space of time you knew who was talking to whom simply by recognising the voices of the individual charachters. I was amazed at the array of accents used in the book which undoubtedly brought it to life.

The story line may not jump out at you from the cover but anyone with the slightest lean towards historical fiction will, I think, enjoy this title. Go on, give it a try, you may learn something. I know I did.

Was expecting something along the lines of Bravehart but found it to be nothing like it whatsoever. I found the story to have to much politics and could do with more pace. Will I read the next instalment? not sure. Maybe.

An astonishingly well researched and written account of the early life of Scotland’s greatest hero, William Wallace. Whyte brings the man and his life and love alive through the eyes of his cousin. Father Jane’s Wallace. The narration is superb, so many different voices used to bring the story to startling life. Loved it!

loved the story and the way it was told, Scottish accent is great. If you love historic books this one is for you.

Freedom has a price and William Wallace paid that price this has to be the best book I have ever heard. From the start to the end it was so alive and the narrator he is a star.

The book has all the making of of a classic history. However I gave up on it. It seemed to drag on and not have a good pace to keep me listening. the subject was great and the take fine. the narrator enjoyablish. Did not like the voice of William though.I agree with most of the other reviews but I could not stick with it. So after about 6 hours I threw in the towel.

If my friend was interested in the tragic, convoluted history of Scotland and its church, in the 13th century then yes. If they wanted a fast paced, action packed read then probably not.

The most interesting part of the book were the beginning and end. I felt the middle parts in the forest dragged on. I think Jack Whyte's decision to have the story told through the eyes of Jamie Wallace a priest, is flawed he his too far removed from William Wallace's life for a big chunk of the book. I found out more about the medieval church and the rise of capitalism than Braverheatrs life. I thought Ewan Scrimgeur would have been the better narrator as he is with Will during most of the book.

Have you listened to any of Bill Dick’s other performances? How does this one compare?

I've never listened to any of Bill Dick's other books but his reading was brilliant. Each character was a believable individual. I'd definitely look out for his names again.

The events near the end of this books were harrowing.

I was annoyed that this 19 hour book only told the story of William Wallace up until he started his war with the English. I was under the impression that it was the whole story. I'm even more annoyed to find out the third book isn't available on Audible.

if the friend liked fictionalised history, yes. it brings that period of time to life when king Edward, longshanks, set his eye on making Scotland come under his rule as he had done to Wales.

it was fast paced and kept my interest all the way through. there was no needless description to slow the story down and made you feel you e there witnessing the events as they happened.

Which character – as performed by Bill Dick – was your favourite?

james, the person the story was told through and euan the soft spoken welsh man sho escorted james and Wallace to their uncle.

this is a well written book with good characterisation and storyline which at times reminded me of the legend of robin hood.
bill dick did an exceptionally good job at performing the book so that you knew which character was speaking and putting the emotions behind the words.

The story is told by his cousin, who we know has become a priest. This book follows them through from childhood to Wallace' emergence as a nationally recognised leader. It tells of the emergence of a movement that could be termed Nationalism, in a country that had no real concept of that. It's lords were often Norman French, holding lands in England for which they owed fealty to the English crown. Edward of England had subsumed Wales and could see no reason why Scotland shouldn't go the same way. The Scottish peasants had even fewer rights than their English counterparts. The Catholic Church was more likely to listen to the English king, with English bishops having the right to appoint even senior clergy.

Whyte's books can be very complicated, and he requires concentration of his readers, but they are well worth it. I enjoyed the audiobook, but there where times when I wanted to re-read something. Never mind. I can always listen to it again. Probably before I listen to the next volume!