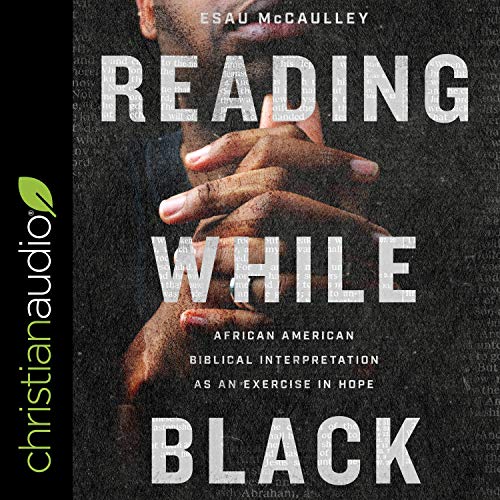 Growing up in the American South, Esau McCaulley knew firsthand the ongoing struggle between despair and hope that marks the lives of some in the African American context. A key element in the fight for hope, he discovered, has long been the practice of Bible reading and interpretation that comes out of traditional Black churches. This ecclesial tradition is often disregarded or viewed with suspicion by much of the wider church and academy, but it has something vital to say.

At a time in which some within the African American community are questioning the place of the Christian faith in the struggle for justice, New Testament scholar McCaulley argues that reading Scripture from the perspective of Black church tradition is invaluable for connecting with a rich faith history and addressing the urgent issues of our times.

He advocates for a model of interpretation that involves an ongoing conversation between the collective Black experience and the Bible, in which the particular questions coming out of Black communities are given pride of place and the Bible is given space to respond by affirming, challenging, and, at times, reshaping Black concerns. McCaulley demonstrates this model with studies on how Scripture speaks to topics often overlooked by white interpreters, such as ethnicity, political protest, policing, and slavery.

What listeners say about Reading While Black

As a non-black Christian and someone that hasn’t read many books from an African American perspective, many parts of the book were eye opening. I am so glad I bought this to listen to on the way to work. There was so much information in here that now I’m buying a hard copy to go through with a highlighter and pen. Loved this book and I have already started recommending it to friends.

This book is essential reading for every biblical scholar. It is a stream of fresh water from a living spring flowing into a conversation that has been muddied by so many false premises. Thank you Dr. McCulley for this vitally important contribution at such a critical moment in history. I believe this will be remembered as one of the most important contributions to the discussion of the Bible and Black lives in our generation.

Thank you Esau McCaulley for opening my eyes

As a 50 something year old white man who has been immersed in the American evangelical church more than 30 years, I’m finding many like me who are deeply questioning where we went wrong. Prior to reading this book, I read Malcolm X’s autobiography and it delivered a jolting awakening to the history racism in America. Malcolms critique of “white-man’s Christianity” was particularly devastating. Esau further illuminates this history from the perspective of one who endured racism personally and yet he holds faithfully to the core of the Gospel of Jesus the Christ as revealed in Scripture. The author does a great job on developing his thesis in a way that shows reverence to the scriptures and to his community of faith. The final chapter brought together all the groundwork for me in a powerful, gracious and hopeful way. I understand why Esau focused heavily on the writings of Paul to build the New Testament vision of the reconciliation of all people groups since Paul’s words were twisted to justify the oppression of slavery. I would love hear more of the person, work and teaching of Jesus the Messiah in removing the walls of separation between the races. This book has inspired me to serve as a peacemaker between black and white in my community. Thank you Esau for sharing the work and passion of your life!

Esau McCaulley impresses me with questions of God Almighty's intentions for those who were and are enslaved. Certain key Biblical scriptures are meditated on due to the depth of context Esau found within. If you enjoy critical thinking, your in for a treat. Personally, my most memorable moments came when listening to Chapter 6, having to do with the issue of what can be done with RAGE. Esau highlights key scriptures that he perceives has much to think upon. I, personally, listened to this Audible multiple times, especially returning to Chapter 6 even more often. I know I am not done listening yet. I eventually purchased the Kindle version so I could highlight all of what I want to be able to return to as food for thought... What Esau has to ask and answer is vital. I found myself adjusting the speed and volume controls until I reached just the right ability to understand Esau's wording. At first listen, I experienced a bit of difficulty until I became accustomed to his cadence and tone. Do not let this discourage you from being able to sit back comfortably and bask in Esau's rich questions and even richer discoveries. I find Audibles most enjoyable when I can listen and rest.

This is an incredible book, engaging powerfully with difficult questions and circumstances as a black America regarding the Christian tradition. Here the author provides keen biblical scholarship, clear logic, while maintaining a friendly and accessible tone. I hope you will benefit from this work!

His testimony to his family , faith, and how his upbringing, and the culture around him challenged his religious views and provides a humble example of dissecting God's word while holding true His Words , and challenging the religious views of others and culture with graciousness and firm affirmation of God's word how others have taken God's word out of context. How he provides deep extact examples of slavery and God's Word on it and how it impacts his relationship and understanding of the historical and everyday evil people of color experience.

The book was great. The narrator was not the greatest and took away from the book.

I am currently driving and trying to write this but God forgive me. This book was so justifying, cathartic, anointed and artfully done. Thank you, Esau McCaulley, for allowing God to use you in such a mighty way.