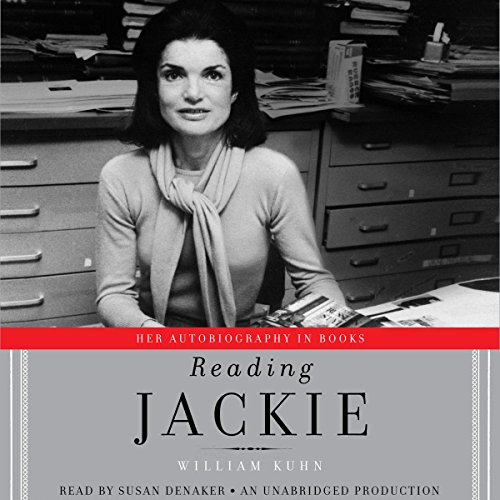 Her Autobiography in Books
By: William Kuhn
Narrated by: Susan Denaker
Length: 12 hrs and 31 mins
Categories: Biographies & Memoirs, Celebrities
5 out of 5 stars 5.0 (1 rating)

William Kuhn has written delicate political biographies before, on the life of Queen Victoria's private secretary and on her Prime Minister, Benjamin Disraeli. Reading Jackie is his first foray into American royalty, and it does not disappoint. The life of Jacqueline Kennedy Onassis was both devastatingly public and utterly protected as private. Made famous by her two powerful marriages, most people have no idea that Jackie spent two decades, from 1975 until her death in 1994, as an editor at Viking and Doubleday. More than 100 books passed through her hands during this time, and Kuhn insightfully interprets how Jackie's editorial decisions reflect on her own history, from books on assassination to fashion.

Her work in publishing was of course almost as star-studded as her work in politics, and she often wielded her publishing power for greater political good. Narrator Susan Denaker presents these cameos with the utmost respect, from a soft London undertow for John Lennon to a gentle New York sparkle for Diana Vreeland. Reserving the subtlest of lilts for Jackie herself, Denaker's formidably broad dialect work as a stage actor is tightly reined in here, giving a power to the writing that any attempt at straightforward impersonation would have made laughable. Kuhn's presentation is primarily to lavish praise on the choices our virtuous hero made, but he also allows some more humanizing glimpses into Jackie's coy sense of humor.

This book is not meant to be particularly revelatory, but instead to view from a fresh angle the image America already knows. Denaker delivers this pleasing new take with dignity, and her voice work contains not a stitch of gossip in the tone. Reading Jackie is Kuhn doing what he does best: lovingly examining the unsung elements of an enigmatic icon's history with an eye for the common threads and contradictions between her public image and her personal thoughts. Megan Volpert

Jacqueline Kennedy Onassis never wrote a memoir, but she told her life story and revealed herself in intimate ways through the nearly 100 books she brought into print during the last two decades of her life as an editor at Viking and Doubleday. Based on archives and interviews with Jackie's authors, colleagues, and friends, Reading Jackie mines this significant period of her life to reveal both the serious and the mischievous woman underneath the glamorous public image.

Though Jackie had a reputation for avoiding publicity, she willingly courted controversy in her books. She was the first editor to commission a commercially successful book telling the story of Thomas Jefferson’s relationship with his female slave. Her publication of Gelsey Kirkland's attack on dance icon George Balanchine caused another storm.

Jackie rarely spoke of her personal life, but many of her books ran parallel to, echoed, and emerged from her own experience. She was the editor behind best sellers on the assassinations of Tsar Nicholas II and John Lennon, and in another book, she paid tribute to the allure of Marilyn Monroe and Maria Callas. Her other projects take us into territory she knew well: journeys to Egypt and India, explorations of the mysteries of female beauty and media exploitation, into the minds of photographers, art historians, and the designers at Tiffany & Co.

Many Americans regarded Jackie as the paragon of grace, but few knew her as the woman sitting on her office floor laying out illustrations or flying to California to persuade Michael Jackson to write his autobiography.

Reading Jackie provides a compelling behind-the-scenes look at Jackie at work: how she commissioned books and nurtured authors, as well as how she helped to shape stories that spoke to her strongly. Jackie is remembered today for her marriages to JFK and to Aristotle Onassis, but her real legacy is the books that reveal the tastes, recollections, and passions of an independent woman.

"A clever, surprisingly substantial take on the life of Jaqueline Onassis... Both respectful and scintillating." (Kirkus Reviews)

What listeners say about Reading Jackie

What made the experience of listening to Reading Jackie the most enjoyable?

I could lie down on the bed, and just relax and listen.

What was one of the most memorable moments of Reading Jackie?

I learned alot about her editorial work, which I didn't know much about

She spoke loud enough to hear.

I wish all the audible books would be loud enough to hear them. The Lebavox recordings are hard to hear.

This book should be more interesting than it was. I listened to about 2/3 of it and stopped. It just lacks Jackie's charisma, and somehow fails to provide the inspiration and character development of a good biography, as it somehow fails to create the respect and compassion for Jackie we know in our heart she deserves. I will probably pick it up again, though, as Jackie did some fabulous work, which deserves appreciation. And obviously, the world is a better place for her presence and contributions.

This book was interesting for anyone who enjoys reading about J.Onassis.The information mainly stemmed from books she has read,as well as her excellent track record as an editor..which surprises people as she didnt use her name on the numerous books she has edited.

I love the narration

I truly enjoyed this book. I learned a lot about "Jackie O". Warm funny lady

Jackie apparently came from a conservative background but had a very strong liberal streak based of what books, etc she chose to edit/work on. You would never realize from what you hear about her in passing that she never quite felt at home in the USA. She deeply loved Europe. So impressed with what she did with her life professionally, which is normally overshadowed by her husbands.

What would have made Reading Jackie better?

I am not especially interested in Mrs JFK but as the number of interesting biographies available on audible is low. BUT - This is just a piece of fluff, a "concept book" rather than any sort of properly researched (or properly written) affair.
The leaps made to concoct its content are giant ones - but sadly not informative or entertaining. Nor are they relevant to its "you are what you edit" rubric. (I did listen to the entire book.)

What could William Kuhn have done to make this a more enjoyable book for you?

Who might you have cast as narrator instead of Susan Denaker?

A professional; the reader's voice adds to the problems.

If you could play editor, what scene or scenes would you have cut from Reading Jackie?

I regret not knowing about the "don't like it, return it" function on the site.