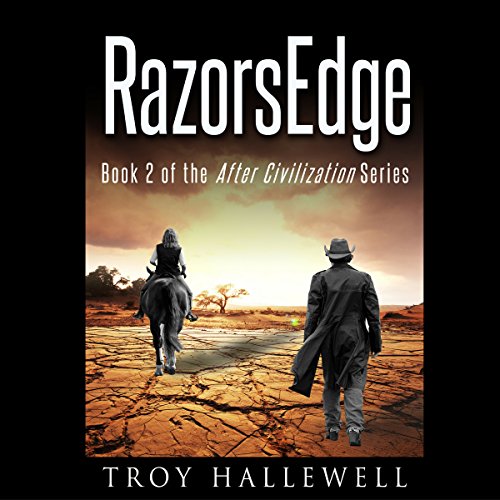 When Rock and Caroline are forced to leave The Waste and seek safety across the mysterious Wall-without-Walls they could never have expected their discovery...or the consequences which would follow.

The old world with its knowledge is not as lost as many have believed. But is technological advancement alone enough to bring peace?

As long-hidden secrets about Rock's past are revealed, both he and Caroline are more determined than ever to help save the tribes of The Waste. However, with an unknown people to convince, new technology to comprehend, and new enemies to outwit, the quest to find an ally in the war against the Vorin may be as unlikely as ever.

But it must go on.

What listeners say about RazorsEdge

This is a great follow up book for book 1 . I enjoyed listening to this book as much as the 1st book in the series.

Great post apocalypse story without being predictable and cliche. Unexpected twists that actually add to the story line and not just for the sake of keeping readers that want drama interested. Finally a story that I can't plot out in my head before listening to it. I know there is a book after this but I hope to see more from this author.

There’s no Edge; it dulled immensely

Oh, how I fell in love with Razor Wire. But Book 2 was an incredible waste of my time and credit.

We’re following Rock and Caroline as they meet the inhabitants who live beyond the wall without walls.

So then we learn, with Caroline, about OUR world and history. Cars, history, etc. It was nails-across-a-chalkboard- boring and unimaginative. The world building was bland to nonexistent. I hated it.

It has completely lost its focus and tone. I no longer care about Solace, Rock, or Caroline. Even their personality is completely different from Book 1. Caroline’s more than Rock.

I can’t believe I was so excited to listen to this. I almost feel like knocking stars off the first one, just because it led to this.

I’m quitting the series and hope I never come across it again.

very repetitive, almost painful it points. I will never really listen to this one again or recommend it.