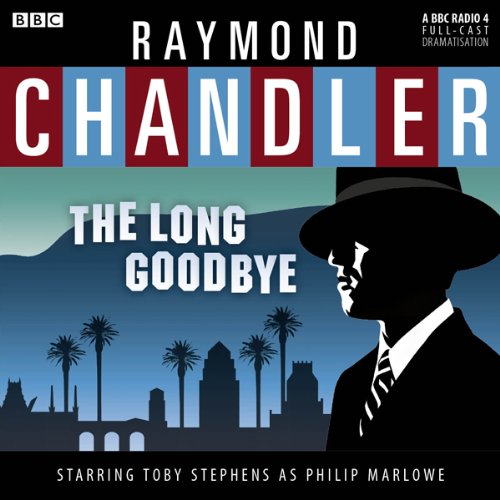 Down-and-out drunk Terry Lennox has a problem: his millionaire wife is dead and he needs to get out of LA fast. So he turns to his only friend in the world: Philip Marlowe, Private Investigator. He’s willing to help a man down on his luck, but later, Lennox commits suicide in Mexico and things start to turn nasty. Marlowe finds himself drawn into a sordid crowd of adulterers and alcoholics in LA’s Idle Valley, where the rich are suffering one big suntanned hangover. Marlowe is sure Lennox didn’t kill his wife, but how many more stiffs will turn up before he gets to the truth?

A Great Way To Spend One & A Half Hours

I'm a huge fan of those old radio plays from the 40's & 50's so at first I was a bit skeptical that they could re-create what is now an entirely lost artform. But I was blown away by how wonderful a job they did at producing that same feeling while listening. The acting, music, sound effects & overall production all contributed to a really great translation of Raymond Chandler's book into the different medium.

Just what you'ld expect from Chandler

Where does Raymond Chandler: The Long Goodbye (Dramatised) rank among all the audiobooks you’ve listened to so far?

In the upper third. These dramatized Chandler tales aren't not long enough to spend a full credit on, but they are entertaining enough to pay the small price Audible asks for them.

The dramatization. These abridge shorts are very well made.

I really like the background sounds (a clink of a glass, the click of a gun, etc.)

Bought this one and then started collecting some of the others. I'm up to three of these now, and can see myself buying a few more.

So disappointing was this story that I didn't bother listening to the ending. Predictable and slow. I usually love the Raymond Chandler stories with Philip Marlowe so I was surprised and bored. I will think again before ordering another.

I’m a fan of Mr. Chandler and this story hits all his beats! Well done all around.

Toby Stephens is no Ed Bishop

Phillip Marlowe-however this rather amaterurish version of Marlowe doesn't work.

The narrator tried too hard to evoke a film noir influenced style to his read. It was not only ineffective it was style over substance. The beauty of any Chandler book is the words, the late Ed Bishop who performed these same stories in the 1970's on BBC articulated and emphasized with ease the language and attitude of Chandler. Toby has the pipes but gets lost by not understanding the context of the character. It's especially annoying with the inferior mix of audio, a lot of background bursts of voices which are mere fragments of the original production, The whole production although sharp in some sections sounds too post modern and ironic.

What character would you cut from Raymond Chandler: The Long Goodbye (Dramatised)?

That should read what actor? The gentlemen playing Terry Lennox was horiffic, sounded like a 17 year old boy. No Jim Bouton.

Unfortunately Ed Bishop has passed, and the original 1970's era actors and producers are likely not available. I admire the fact that you would take this task on and Toby is talented, but not ready to step in Ed's shoes. As for the paired down production elements and lesser actors it's a real disappointment. Instead-reissue the superior production from the 1970's. The producers should have offered the lead to Elliot Gould who besides being a great actor, is a huge chandler fan and the star of the 1973 film adaptation of the book.

Loved it, Toby Stevens Marlowe is granite with a marshmallow centre! A classic Chandler tale not to be missed.

Very effective dramatisation of the book

This is the Radio play from Raymond Chandlers book and condenses one of the very best Philip Marlowe stories into a one and a half hour play. Certain characters (Linda and Dr Loring) are missing altogether, but that is the nature of an adaption. The relationship between Marlowe and Terry Lennox, which lies at the heart of the story is very effectively played and overall I preferred this faithful adaptation of Chandlers book, to the film version, which in my view took too many liberties with the story