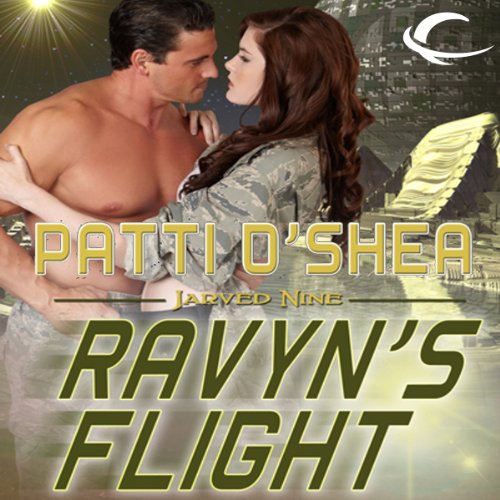 Communications specialist Ravyn Verdier is on a mission to test the habitability of Jarved Nine when her team is mysteriously killed. Sent to rescue her, commander Damon Brody becomes stranded on the planet with her. Trapped on a world harboring an unimaginable evil, Ravyn and Damon must depend on one another - and they discover love is the only force strong enough to battle their unseen enemy.

What listeners say about Ravyn's Flight

As Romance in a Sci Fi Setting, This Book Soars...

When I was in my teens and early 20's, I was a great lover of Sci Fi. Asimov and Bradbury were my heroes. I still like a good sci fi from time to time, but my genre's of choice these days are romance and paranormal. I'm saying this because if you are a hard core sci fi lover, and can't already tell by the cover, this book is a romance that happens in a sci fi setting. The sci fi is decent, the action is good, but the primary focus is on the relationships.

As a romantic sci fi, this book soars. It had excellent pacing. The hero and heroine meet early in the book, the peaceful times are spent building the relationship element, but the action scenes come often enough to keep you on your toes. There's also a good side story going on to spice things up even more.

Ravyn is a civilian working for an organization known as CAT. CAT is sort of a scouting group that lives on un-colonized planets for a length of time to determine if it is suitable for colonization. She's a communications specialist. Damon is Spec Ops. After a massacre by an unknown being that destroyed the CAT base, Damon and his team are sent in after a distress signal was sent. Ravyn and Damon wind up being the only two alive on the planet, except for the native wildlife, and, of course, the killer. As they try to stay safe and make their way to a defensible place to wait for rescue, their relationship grows and some interesting (and for my part, unexpected) paranormal developments take shapes. For me, this was bonus!

Meanwhile, after not hearing back from the Spec Ops team that had been sent, and not being able to contact the CAT base, a rescue attempt is being conducted by Ravyn's brother, who is a senior officer in Spec Ops, and her best friend, another CAT civilian. That's sure to be the love story carried on in book two, but it gets off to a nice beginning in this book.

Overall, I was quite happy with the story. I did have a few reservations about the production. I don't think it was the narrator so much as the recording just not sounding as slick and polished as what some of the better produced books I listen to have. I don't want to scare away the listener. It is far, far from horrible. I wasn't really annoyed by it at any point, but the recording itself just sounded a bit low budget.

So overall, if you like romantic sci fi, you'll probably like it. Paranormal readers might enjoy this more than your average romantic sci fi, since paranormal elements are introduced. Sci fi lovers, well, if you've just met the love of your life and are feeling a bit in that sort of loving mood, you might find this entertaining. If you've never read romance sci fi, this would be a good book to read to see what the sub genre is about.