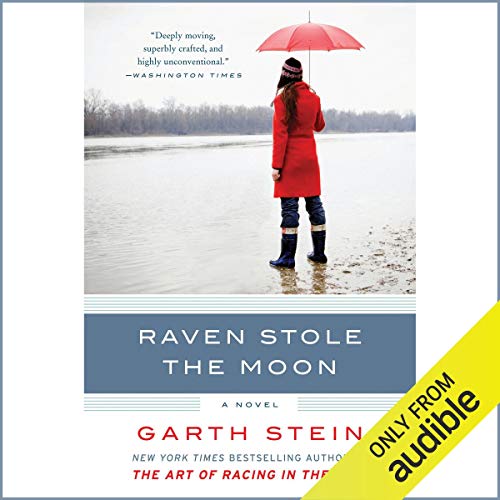 Jenna and her husband Robert were living the American dream in Seattle, complete with their 5-year-old son, Bobby, a fancy BMW, and Robert’s money-making job as a real estate developer. Then Bobby tragically drowned on a trip to Alaska. Two years later, on the anniversary of his death, Jenna impulsively leaves Robert and their deteriorated marriage at a party and drives north. She boards a ferry to Alaska, drawn to her mother’s hometown, close to where Bobby died. Concurrently, a new resort is slated to be built near the bay where Bobby drowned. A shaman is hired to rid the area of bad spirits from the Tlingit (sounds like “Clinket”) Native American tribe that once lived there. Not surprisingly the two stories intertwine, as Jenna, who herself is a quarter Tlingit, delves deeper into the tribe’s culture, and begins to believe that their spirits might hold the answers she’s been searching for in her son’s death.

Jennifer Van Dyck’s formal, yet breathy enunciation of words adds an ethereal quality to her story-telling — it works perfectly for the spiritual nature of this novel. Even when the novel relies on the rare cliché, Van Dyck is able to make it sound fresh and interesting. She’s at her best when enacting Jenna’s character, but is able to put on a gruffer voice for male characters that are suitably believable. Her pauses between the alternating story lines are effective and keep the two from getting confused, otherwise the steady pace of her speech has a soothing nature.

A novel that eloquently juxtaposes American greed with Native American spirituality, Raven Stole the Moon is ultimately about getting through grief, searching for closure, and tapping into the unknowns that are the center of every human experience. —Colleen Oakley

From Garth Stein, the New York Times best-selling author of The Art of Racing in the Rain, Audible presents Raven Stole the Moon—in audio for the first time, and beautifully narrated by Jennifer Van Dyck.

Jenna Rosen returns to the place in Alaska where her young son, Bobby, disappeared without a trace two years before. Jenna is determined to lay to rest the aching mystery of his death. But ancient legends may have had a hand in Bobby’s fate, forcing Jenna to sift through her own Native American ancestry to uncover the truth.

Wrangell, Alaska, offers Jenna little comfort beyond the constant and tender attention of Eddie, a local fisherman. When ancient legends begin to suggest a frightening new possibility about Bobby’s fate, Jenna digs deeper into the menacing forces at work in the wilderness. A Tlingit shaman named Dr. David Livingstone warns Jenna not to disturb the legendary kushtaka—soul stealing predators that stalk a netherworld between land and sea, the living and the dead. But Jenna is desperate for answers, and she appeals to both Livingstone and Eddie to help her sort fact from myth, and face the unthinkable possibilities head-on.

What listeners say about Raven Stole the Moon

I love this book

I've read and listened to this so many times and I still love it! Garth Stein doesn't ever disappoint.

This is a fabulous book. I could not stop listening. The narration was excellent and the story was so interesting, kept my full attention to the end.

Grief in it’s naked form. Loved this book and will read it again after just finishing. The details of Grief written only by someone who has gone through it.

The story is well told and interesting. I read this a few years ago before going to Alaska.

It was a bit raw at times but great reader.

Where does Raven Stole the Moon rank among all the audiobooks you’ve listened to so far?

Would you be willing to try another book from Garth Stein? Why or why not?

Who would you have cast as narrator instead of Jennifer Van Dyck?

I don't know. Jennifer's narration of this was annoying. Stac·ca·to would be the best way of describing her style.

I loved this book. It seems to encompass several genres-fantasy, mystery, romance, adventure. The main character, Jenna, has lost herself after an accident that killed her little boy. She runs away to the Alaska town where she lived as a girl, leaving her husband and parents worried about her. She finds many things and many people. You need to read the book to find out if she finds what she was looking for.

The audio book was narrated expertly by Jennifer van Dyke.

A step into time and that which is inexplicable

Stein has managed to tell the readers that dogs and ghosts can communicate when we silence our minds and see into the heart.

another awesome e story by Garth Stein. The Details he puts in his stories keeps you wanting to go on hard to "put down"

The spiritual world, which the novel revolves around, involves spirits which are 'shape-shifters', which I did not note in other reviews. I found it hard to keep my interest in the novel towards the end, as it shifted more from reality to the super-natural.