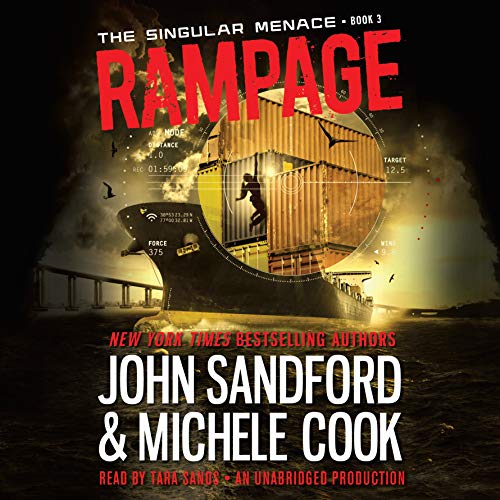 Shay Remby and her band of renegade activists have got the corrupt Singular Corporation on the run. Their exposé is finally working. Or is it?

Even as revelations about the human experimental subjects break in the news, Singular's employees are slithering out of sight. And then their CEO is killed in a plane crash.... Was it a freak accident? Or a cover-up?

Shay's gang begins to see signs that there may be even more powerful figures than they knew managing events - publicly expressing outrage and mopping up the mess but secretly gathering up their scientists and moving the operation further out of sight.

It will take nothing short of a rampage to stop the Singular menace for good....

What listeners say about Rampage

What a great read

I am so sorry it is over. The story line was intriguing and it moved without leaving you behind.

The start of great characters I Prey (pun in tended) !! I loved all three books!! More plz

I feel incompetent for being suckered into thinking that a "Sandford" co-authorship would mean I'd enjoy this book like I do his 100% authored books. Virgil Flowers and other Sandford characters must be rolling over in their grave. I was even stupid enough to buy all 3 books in this future chick flick series. D'oh!

The series kept you on the edge of your seat. Now looking for more on Shay.