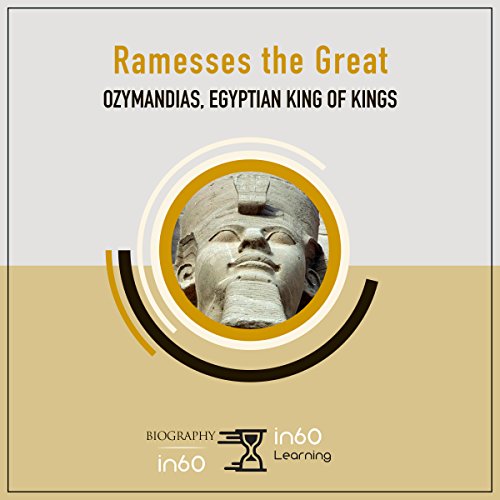 By: in60Learning
Narrated by: Alexander Doddy
Free with 30-day trial

Get smarter in just 60 minutes with in60Learning. Concise and elegantly written nonfiction audiobooks help you learn the core subject matter in 20 percent of the time that it takes to read a typical book. Life is short, so explore a multitude of fascinating historical, biographical, scientific, political, and financial topics in only an hour each.

Ramesses II had the phrase “I am Ozymandias, King of Kings” inscribed on the base of a statue of himself. Historians believe he earned this title, though, and consider him "Ramesses the Great", one of the most successful, powerful, and well-regarded pharaohs of ancient Egypt.

Ramesses’ military leadership impressed his father so much that he stepped down after 15 years as pharaoh, saying, “Crown [Ramesses] king so that I may see his accomplishments while I still live!”

This biography introduces listeners to his many accomplishments as both a warrior-king and a god-king. When he died at age 96, Egyptians believed him to be a higher deity than any who preceded him; in some ways, he achieved eternal life by living on in memory through the end of the Egyptian Empire and beyond.

What listeners say about Ramesses the Great

Wonderful introduction to a man, a time and a place. This could either serve as a stand alone overview or could supplement your other studies of ancient Egypt, by going into more detail of the life and times of Ramesses the Great. Very interesting.

The narrator did a great job.

in60learning is way for you to brush up on a topic in 60 minutes or less! You can choose a person or historic time and an hour later, you’ll be smarter than ever! A perfect resource for students!

Ramesses the Great is a great follow up to Hatshepsut if you're wanting to brush up on Egyptian history.

Just like other titles by in60learning, Ramesses is short, to the point, and filled with useful information. It's not overwhelming in its delivery and I enjoyed the exploration of Egyptian culture that each chapter took me through.

The narrator, Alexander Doddy, made it 100 times better than the others I've listened to! His personality and lively voice brought the story together in a way that brings the listeners into the story and makes even the boring-ish parts interesting! I'm certainly a fan of him.

Overall, I really enjoy Ramesses the Great and once again recommend it as an excellent student resource! 4 out of 5 stars.

I received this book from in60learning for the purpose of this review. All comments and opinions are entirely my own.

This is a LiteratureApproved (.com) Review.

All I needed in 60 minutes. Lots of interesting history and leadership lessons. Narrator is very good.