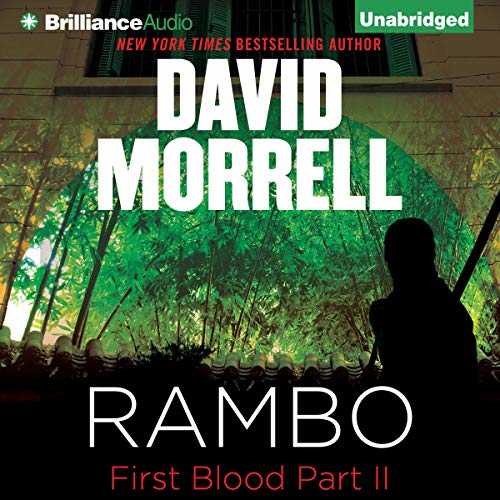 The most dangerous man in the world is back.

David Morrell's First Blood introduced Rambo, who joined the ranks of Sherlock Holmes, Tarzan, James Bond, and Harry Potter as an international thriller icon. In this sequel, Rambo is in prison for his one-man war against a small-town police chief. His former commanding officer, Colonel Trautman, arrives with a promise to release him, with two conditions. First, Rambo must return to the Vietnamese prison camp from which he escaped and find the missing Americans rumored to be prisoners there. The second condition? Don't rescue the prisoners. Only bring back photographs. Under no circumstances engage the enemy. For Rambo, the first part is difficult. But the second is impossible. This novelization and the film have many differences. Listen to the story that the film could have had.

"Morrell, an absolute master of the thriller, plays by his own rules and leaves you dazzled."
--Dean Koontz, New York Times bestselling author of 77 Shadow Street

What listeners say about Rambo

The Advantage of Hindsight

Yeah, this time the book had the advantage of hindsight because David Morrell wrote this novelization after the film had been made but not released. He starts this audiobook with a foreword about the context of his decision and his initial reluctance to write it, but he did a great job in creating back stories for the Vietcong characters. Against his credit, the Hulk-smash-his-way-free-from-bondage scene was a bit stupid. To his credit, however, the helicopter-on-helicopter fight scene was an improvement because he acknowledged that the back blast from a shoulder-fired rocket would have killed everyone on board. Last but not least, the narrator does an exceptionally good job, for his Vietnamese accents were hauntingly accurate, and he also made Co sound as though she were actually dying and Banks, as if he were genuinely drained of strength. Sadly, his Russian accent was too nasal and somewhat off target.

Much better than the movie which was great by itself but with the additional parts,this version takes it to another level

This book fully explains how Rambo was able to kill hundreds of people in this story!

entertaining, but not as good as first blood. Any fan of action will enjoy this book.

I couldn't stop listing, you get a peak of James Cameron's version , the theatrical and an original story all in one.

fantastic book.. loved it . Easy read and I couldn't put it down. .. Great job

Another great performance and story!

Where does Rambo rank among all the audiobooks you’ve listened to so far?

Not the best by any means, but certainly enjoyable.

What was one of the most memorable moments of Rambo?

The suspense and action

Which character – as performed by Eric G. Dove – was your favorite?

The Rambo character for sure - Once again, Eric Dove did a great job at making Rambo sound just like Sylvester Stallone did in the movies.

If you enjoyed the Rambo Film series, it's almost a certainty that you'll enjoy the book as well.

This novelization of the movie script is amazingly creative, for moments, and unless you don't know it, makes you feel like the movie was based on the book and no the other way around as is the reality. Great book!!!

Loved this book brilliant from start to finish:)

David Morrell wrote another brilliant book, narrated so well by Eric G. Dove, loved the intro before the book started :)

great book best novelisations of a movie I have read. great action better than the movie