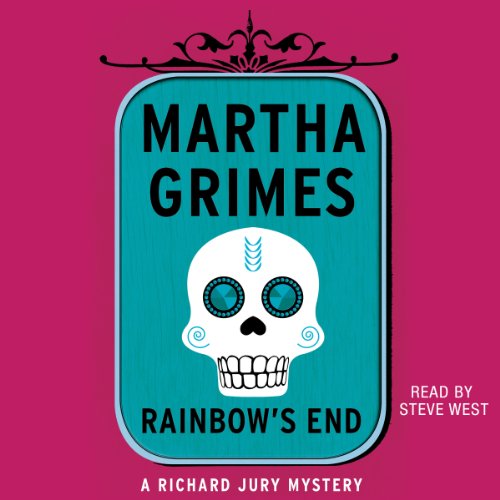 When three women die of "natural causes" in London and the West Country, there appears to be no connection - or reason to suspect foul play. But Scotland Yard Superintendent Richard Jury has other ideas, and before long he’s following his keen police instincts all the way to Santa Fe, New Mexico.

There, in the company of a brooding 13-year-old girl and her pet coyote, he mingles with an odd assortment of characters and tangles with a twisted plot that stretches from England to the American Southwest. And while his good friend Melrose Plant pursues inquires in London, Jury delves deeper into the more baffling elements of the case, discovering firsthand what the guide books don’t tell you: That the Land of Enchantment is also a landscape ripe with tragedy, treachery, and murder.

What listeners say about Rainbow's End

Jury mysteries are always witty and amusing, but this one seems to veer out of its comfort zone by adding ridiculous American stereotypes, bad dialogue, and bad American accents. Kind of seemed as though the author took a trip to New Mexico and just had to make Jury fit into it. He didn't.

I kept getting distracted, as it wandered a bit. I didn't give it the 5 stars I give most of my books.

How I Do Love These Books!!

Martha Grimes has such an imagination! The twist and turns at times it can be hard to keep up. But these main characters are so easy to love you must stay with it to the end. I love this story for how Richard Jury and Melrose Plant have these inner conversations with themselves about their relationships or lack there of with the women they know or have known. How both men lack self esteem at times and compare themselves to each other. Melrose jealous of Richard and Richard being jealous of Melrose. Yet, they really care for each other like brothers. It’s hard not to fall for both men because they are both kind and giving but see it in the other person and not themselves.

Again I have to give a bravo 👏🏻 to Steve West for his performance. His attention to detail and remembering the voice he has give characters who he voiced in past books. He is such a wonderful narrator and a pleasure to listen to. Martha Grimes is not only a talented writer but she has a sharp ear for choosing the best narrator and voice for her books.

the narrator 's voice is perfect for the richard jury series!
this book,however, was confusing and sometimes hard to.follow.

one of the best books yet! on to the next!

I love the reappearance of characters from previous books . a fast and easy read since I just couldn't put it down!

Errors re U.S. but not as many as in The Horse You Came In On

Somehow, I manage to keep reading/listening to these books, even though they contain the negatives I below list. I do like the overall plots and the exploration of different parts of England, and I find intriguing the glimpses into the writer’s psyche.

This particular book, however, has some plot points which just don’t match that of the other Richard Jury novels. One is that the character Melrose Plant (usually incredibly smart, and excellent at deciphering complicated, confusing actions of a murderer; book #1 establishes these facts) is, in Rainbow’s End, incredibly obtuse, re some VERY obvious clues. Ditto re the character Richard Jury. It’s really weird...

Grimes’ other Richard Jury books have a number of the main characters exhibiting racism, at the level common in England. It’s an enragingly realistic depiction of English racism, so, is at least accurate for the characters in question. THIS book contains common racism (such as a character attributing a belief to “American Indians” [yes, a racist term on its own], as if they were [and are] a homogenous entity, rather than a number of nations, each with its own beliefs). However, it ALSO really surprised me, by containing an incredibly clueless, and especially horrible and hurtful, racist statement, which supremely trivializes an historic, genocidal action taken against First Nations. In Rainbow’s End, a man, taking leave of a location, traverses a gauntlet of weeping persons sad to see him go. This man is stated to be on his own “Trail of Tears”!!!!!

As with almost every other book in the Richard Jury series, Rainbow’s End views women from a chauvinistic male’s point of view, including viewing the action of flinging hair over one’s shoulder as a “flirtaceous” action, EVERY TIME. It is specifically pointed out that, contrary to what “a woman” always does, a young teenager who flings her hair over her shoulder is doing so merely to get her hair out of her face.

Given that this book is set in the 1990s, the rather extreme chauvinism is dated, since it’s not just on the part of police officers. (Re the police officers, one of them decides that he likes a man, immediately after said man has sexually harassed a server, and done so crudely and cruelly.

There are some hilarious errors, re the U.S., in this book. However, as THIS book takes place mainly in England, it contains FAR fewer errors than does the mainly-set-in-the-U.S. book: The Horse You Came In On. (Just one example from THAT book: an American woman, NOT elderly, uses a handkerchief, HER OWN, rather than Kleenex tissues! ROTFLMAO!!!)

Each book of the series of Inspector Jury is a nice story, with likeable protagonists, behaving in a more or less extravagant way, with more or less logic. The mistery of this story is particularly baffling: three women that may or may not have known each other, have died in public places apparently of natural causes - but maybe not? The investigation brings Inspector Jury to New Mexico where, inevitably (as always in the books of the series), he meets a young girl who will play an important part in the solution of the case.
The book doesn't care about logic or credibility - it's rather about the atmosphere, the general impression of warmth and friendliness.