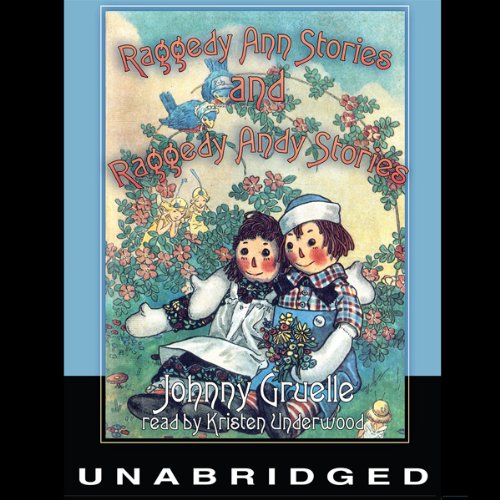 The dolls in these stories act and talk just like real people - that is, when their mistress, young Marcella, or other humans are not there to see them.

Raggedy Ann has charmed millions with her warm and optimistic outlook and unflappable approach to difficulties, while Raggedy Andy has pleased fans with his adventurous spirit and compassionate nature. As Gruelle’s granddaughter said, “[These stories contain] nothing to cause fright, glorify mischief, excuse malice, or condone cruelty.” All the original twenty-four stories from Johnny Gruelle’s two books are included here, and all are guaranteed to delight and inspire.

Johnny Gruelle (1880-1938), the much loved creator of the brother and sister rag dolls Raggedy Ann and Raggedy Andy, started his career as a newspaper cartoonist. By beating out fifteen hundred entrants in a comic drawing contest sponsored by the New York Herald, he earned a $2,000 prize and an extended contract to provide a weekly installment of his cartoon Mr. Twee Deedle. In addition to designing the Raggedy Ann and Andy dolls, he soon began writing and illustrating make believe tales and adventure stories for children.

Too slow even for me

I love children's books. My favorite is the wind in the willows. Stories without vilians make for great bedtime reading. So, I thought I would like this... I wanted to like it but I could not get past the second chapter. The echoing gets annoying very fast and the lessons don't seem to fully fit the stories. It comes across like the author tried to add lessons as an after thought maybe at the request of an editor or something.

need this story to stop having problems playing

My four year old and I like listening to these stories at bed time. I play them at 90% speed and they're very soothing and pleasant. Enjoy these sweet old fashioned stories.

My kids enjoyed it

A sweet story and well done by the narrator. Especially lovely for young children or those who are sensitive to dark scary tales. It is simple, but my children ages 4 and 7 thoroughly enjoyed and it brought back fun memories for myself, as well.