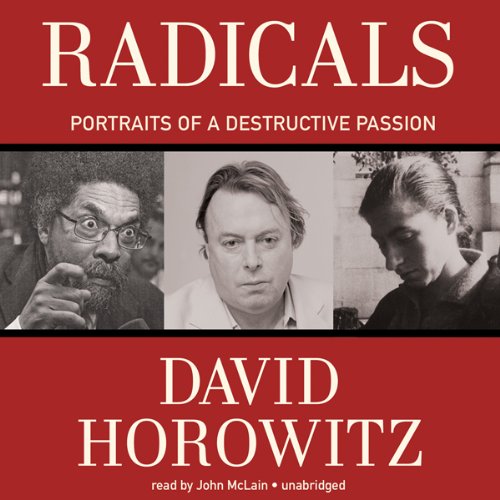 Portraits of a Destructive Passion
By: David Horowitz
Narrated by: John McLain
Length: 7 hrs and 7 mins
Categories: Non-fiction, Philosophy
4.5 out of 5 stars 4.7 (3 ratings)

From Karl Marx to Barack Obama, Horowitz shows how the idealistic impulse to make the world a better place gives birth to the twin cultural pathologies of cynicism and nihilism and is the chief source of human suffering. A former liberal himself, Horowitz recounts his own brushes with radicalism and offers unparalleled insight into the disjointed ideology of liberal elites through case studies of well-known radial leftists, including Christopher Hitchens, feminist Bettina Aptheker, leftist academic Cornel West, and others.

Exploring the origin and evolution of radical liberals and their progressive ideology, Radicals illustrates how liberalism is not only intellectually crippling for its adherents but devastating to society.

David Horowitz is one of America’s most original and iconoclastic political commentators. He is the best-selling coauthor of The Rockefellers and The Kennedys and the president of the Center for the Study of Popular Culture. He lives in Los Angeles.

"David Horowitz is one of America’s most important and interesting thinkers." (Bernard Goldberg, best-selling author)

What listeners say about Radicals

While this book started off a bit slow, once you get past the first or second chapter you won't be able to put it down.

Absolutely loved the Cornel West chapter. But more than that Horowitz did a fantastic job of threading the needle between marxism and collegiate black studies, feminist studies and American studies courses.

In fact, the only reason I didn't give it an all around five is because of the slow beginning. But outside of that Radicals: Portraits of a Destructive Passion is a real winner!

An American political "MUST READ"!

If you could sum up Radicals in three words, what would they be?

A "MUST READ" for anyone truly interested in understanding America's radical left.

I find that many people do not really have an accurate understanding of the principles that motivate America's political left. Horowitz lays bare the inner workings of the radical mind and explains the philosophical underpinning behind the unobtainable Utopian fantasy that drives leftist policy and practice. The book pulls together past and present into a coherent expose of contemporary socialist / progressive thought. The portion on Saul Alinsky and how his disciples have emerged to shape modern America's ominous collectivist trajectory is particularly valuable to the understanding of both how we got here as a nation and where the radicals would have us go next.

I always thought Cornell West was a clown, but I didn't realize what a douche he is too!
I love David Horowitz's work because he shoots from the hip without being subjective. He uses fact instead of theory which is something never seen in the leftist world.

I thought I knew a fair bit about David Horowitz and that period of history, but this book was an eye-opener. David Horowitz has such inherent decency and, of course, great intelligence and experience, that I began to understand the unique role he is playing. His writing makes complex ideas clear and understandable. We are so lucky that he still, in his 70's, is writing and helping keep this country on track with his insight. Some of the book gets a little personal between the writer and subject, but that's to be expected, given who he was, and he handles that aspect well. The section on Saul Alinsky is something everyone needs to hear and his piece helps us understand the current state of affairs in North America. After finishing this book, I've plunged immediately into another of David Horowitz's books, because one wasn't enough! The narrator mispronounced a few words, which dropped my score for performance to a 4, but otherwise he was fine.

Using the political and personal lives of a group of intellectually dishonest radicals known to the author: the author reveals what drives these tormented, self-righteous activists in their never-ending search for personal fulfillment and religious experience no matter what the ultimate cost in human lives and human misery will come from their utopian schemes.

This book was personal and well documented. I especially love the redemptive and beautiful story of Susan Lydon. to counter balance the otherwise distressing stories..

Great Insight From a Respectable Source

If you like history and love to read it as biography, this is a "must read". I admit right up front that I am a big fan of David Horowitz and, though I limit how often I watch the "news" and political talk shows, I will make a point of tuning in whenever I see that Mr. Horowtiz is going to be a guest. So, my bias may show but if you share my appreciation for the author, then you will know that this is one that you really need to buy.

In addition, I also must admit that even though I am a Bible believing Christian, I am also an admirer of Christopher Hitchens. Not his views, obviously, but of his talent. And after reading this work I believe I am safe in assuming that the author, who was a personal friend and acquaintance of Mr. Hitchens, shares my particular admiration. And knowing that these two gentlemen had paths that crossed over a period of decades, I had only two regrets: that I had allowed the business of life to delay my reading of this book and that the author didn't give us even MORE in his discussion of the life of Christopher Hitchens.

However, on the whole I was not disappointed. John McLain only added to my pleasure with his very well done narration. I sat in my family room (leaving my wife to rest and recover from bronchitis in another room) with my Himalayan salt lamp providing a dim glow while our local classical radio station (101 FM) played softly in the background and Mr. McLain read the words of Mr. Horowitz on my Amazon Fire, hooked up to my Bose speakers.

I add that last paragraph because sometimes I think folks would enjoy good audio books more if they were in a relaxed, comfortable environment.

I laughed out loud (that is, "LOL", on social media) a number of times, especially during the chapter on Cornell West. Mr. Horowitz took the words right out of my MOUTH. But the rest of the book was very much brand new to me. I had no idea who the feminist Bettina Aptheker was, for example.

So, I will close by saying that this book had a little bit of everything in it for me and I LEARNED a great deal, which is what makes a book so worthwhile. I have much to learn but not quite as much as I did before picking this one up. Thank you, Mr. Horowitz. And I'm looking forward to my next opportunity to read something that you have produced.