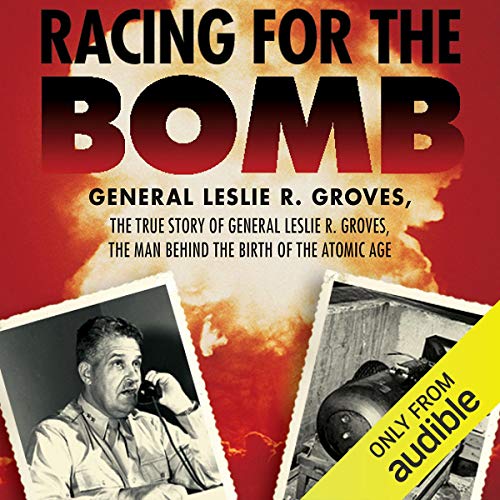 Racing for the Bomb

In September 1942, Colonel Leslie R. Groves was given the job of building the atomic bomb. As a career officer in the Army Corps of Engineers, Groves had overseen hundreds of military construction projects, including the Pentagon. Until now, scientists have received the credit for the Manhattan Project's remarkable achievements. And yet, it was Leslie R. Groves who made things happen. It was Groves who drove manufacturers, construction crews, scientists, industrialists, and military and civilian officials to come up with the money, the materials, and the plans to solve thousands of problems and build the bomb in only two years. It was his operation, and in Racing for the Bomb, he emerges as a take-charge, can-do figure who succeeds in the face of formidable odds. Revealed for the first time in Racing for the Bomb, Groves played a crucial and decisive role in the planning, timing, and targeting of the Hiroshima and Nagasaki missions. Norris offers new insights into the complex and controversial questions surrounding the decision to drop the bomb in Japan and Groves's actions during World War II, which had a lasting imprint on the nuclear age and the Cold War that followed. Groves's extensive influence on key institutions of postwar America has been overlooked for too long. In this full-scale biography, which includes archival material and family letters and documents and features several previously unpublished photographs, Norris places Groves at the center of the amazing Manhattan Project story.

What listeners say about Racing for the Bomb

Norris cover Groves early life, his life at West Point, graduating 4th in his class and after graduation going into the Corp of Engineers, he also explains how Groves developed his exceptional organizational skills and administrative skills. The author covers Groves' time overseeing the building of the Pentagon.

Norris states Groves was responsible for choosing the three key sites, Oak Ridge, Los Alamos, and Hanford and for the construction of the buildings at these sites. The author bogs down the book with too much information as how many miles of corridors there we’re and how many windows etc.

At the end of the book Norris covers Groves’s role in the Cold War. Norris was meticulous with his research and had access to all the detailed information on daily activities, meetings, phone calls and so on kept by Gen. Groves’s secretary Jean O’Leary. The book is well written but does bog down at times. I found the book most fascinating.

If you are interested in World War II history or the Manhattan Project this would be an interesting book for you to read. The audio book is long 23 hours, Peter Johnson narrated the book.

More than just the bomb

The book is titled Racing For The Bomb and it seemed reasonable to assume that it discussed the period from Leslie Groves appointment to head the Manhattan Project to the dropping of the bomb or, perhaps, from the first serious decision to try to build the bomb to the dropping of it.I bought this book because I was interested in learning more about how the Manhattan Project was run and how it ended up producing an atomic bomb in only 3 years, a period much shorter than anyone would have expected. Instead this book turns out to be a biography of General Leslie Groves and, of course, spends a great deal of time on Groves' family and his family life. Indeed less than half of the book (approximately 10 1/2 hours) covers the period when he was in charge of the Atomic Bomb program during World War II.

Much of the book that covers the early Groves' life is spend discussing his father's career as a minister and then an Army chaplain as well as his brothers and sisters and their lives. While a standard part of a general biography I found much of this information to be extraneous and dull since it had no bearing on the period of the Manhattan Project and its aftermath, although the period convering his attempts to gain entry to West Point, his life there and his early life as an Army Engineer were more interesting and had a great deal of bearing on how and why he ran the Manhattan Project as he did.

That portion of the book covering his appointment to head the Manhattan Project through the construction, testing and dropping of the bomb were very interesting and covered much more than I would have expected. While there is little discussion of the technical problems involved, there is a great deal on what had to be done to support the project, the interaction between Groves and the scientists doing the research work, surprising information about the effort those associated with the project exerted in Europe to prevent Germany from developing the bomb (until they learned how far behind Germany was) and the effort to round up atomic scientists as the Allies swept toward Germany after July 1944. There are also details of events I never heard of, like the transportation of "Jumbo" to the Alamogordo test site, a very interesting subject in itself.

One of the most interesting parts of the book for me was the coverage on the political events leading to the actual dropping of the bomb. Mr Norris make clear tht there was no real decision to drop the bomb, just the lack of a decision to not drop it, but I found the coverage of the politcal discussions leading up to the actual dropping of the bomb fascinating.

The coverage of Groves' life after the end of World War II seemed anticlimactic and some of the events, like his antagonism toward David Lilienthal, was simply sad. The author makes a very good case that Groves was instrumental in the construction of the bomb and that without him the development effort would have taken much longer and many lives would have been lost in the invasion of Japan.

I felt that the narration of the book was acceptable, but not inspired, and that the book was far too long and too detailed for what I expected it to be. A more aggressive editor might have improved the book by cutting out a great deal of information that was not pertinent, but the book is OK, if not great, as it is.

My opinion is that the information on Lesley Groves grandparents and parents had little relevance to the story and that the book could have been more interesting and satisfying to read if it was half the volume.
Narrator had a tough task making the book interesting but sounded bored

I couldn't make it past the second chapter of this book. it's basically reading the appointment book of a bureaucrat. I would rather watch paint dry. Total waste of a credit, don't waste yours.

Great book about an American Hero and Genius! No other man could have done it.

It should astonish any reader familiar with military hierarchy that Leslie Groves held the permanent rank of Army Colonel when chosen to head the Manhattan project. As this book illuminates, this fact may explain a measure of Groves’ hubris as well as the reactions of more senior officers when Groves was finally given
three stars.
The book is a little weak in describing the roles of the three main sites and the technical aspects of this massive project. However, arguably Groves’ own earlier book covers these aspects adequately.
An excellent and essential contribution to a full understanding of the atomic age and its principal manager.

Minor problem with the audio editing. Someone could have gone through and silenced all the times the narrator took a breath. Could have gotten a high school student to do it for minimum wage.

Aside from that minor annoyance, I'm glad I got and listened to this book.

A child of the 70s India, I knew about the Scientific side of the Manhattan Project and nothing about the Military side other than a few references in Feynman's books etc. This tale was all the more fascinating as a result. Secondly it gave me a view into the American mind of the early 20th century with it's self centered arrogance which of course is still around today.

Nevertheless it is a fascinating tale and well produced. Well worth the price and the time spent in reading it. Highly recommended.

Informational that is all I can say. The book is solid information. Which isn't a bad thin but makes it very dry to listen to. This is a book much better read then listened to.

Would you consider the audio edition of Racing for the Bomb to be better than the print version?

Yes. The book is so long and full of technical details that having it read, is much more pleasurable than reading.

Most of the books on the Manhattan Project concentrate on the scientists' contribution to the success of the project. This book focuses on the engineering and industrialization required to make the bomb work. Without Groves' contribution the program would have fizzled.

When General Groves contacts the Secretary of Treasury to borrow tons of the US Mint's silver needed to build the magnets to purify Uranium. Anyone wanting to know the story of the Manhattan Project should read this book and Richard Rhoads "The Making of the Atormic Bomb." Both are superb.

The heroic and stoic life of a dedicated patriot.