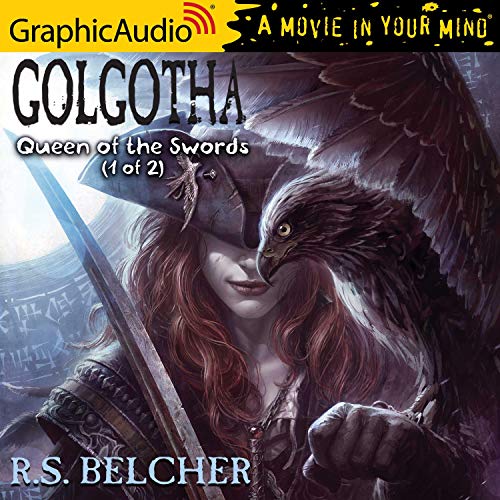 Queen of the Swords (1 of 2) [Dramatized Adaptation]

1720. Escaping the gallows, Anne Bonney, the infamous pirate queen, sets sail in search of a fabulous treasure said to be hiding in a lost city of bones somewhere in the heart of Africa. But what she finds is a destiny she never expected....

1870. Maude Stapleton, late of Golgotha, Nevada, is a respectable widow raising a daughter on her own. Few know that Maude belongs to an ancient order of assassins, the Daughters of Lilith, and is as well the great-great-great-great-granddaughter of Anne Bonney, the legendary female pirate.

Leaving Golgotha in search of her daughter Constance, who has been taken from her, Maude travels to Charleston, South Carolina, only to find herself caught in the middle of a secret war between the Daughters of Lilith and their ancestral enemies, the monstrous Sons of Typhon. To save Constance, whose prophetic gifts are sought by both cults, Maude must follow in the footsteps of Anne Bonney as she embarks on a perilous voyage that will ultimately lead her to a lost city of bones in the heart of Africa - and the Father of All Monsters.