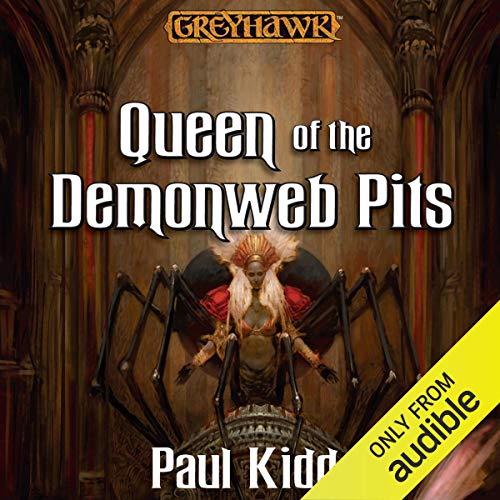 Queen of the Demonweb Pits

What listeners say about Queen of the Demonweb Pits

A Letter to Paul Kidd

Son! You can't attain greatness like this, son. You could be as great as other authors like R.A.Salvatore or Ed Greenwood but son, you abandoned your greatest characters like the Justicar, Escalla, Cinder and especially me, ME! Son!? Me? It's just not done, son.  I thought I trained you better than that, son? I thought you knew what it took but I can see now that I took my hands off the stirrups too soon. I should've paid more attention to what YOU were doing instead of chronicling the adventures of Escalla and Evelyn the Justicar. I'm disappointed, son! I've talked to several people over the years in many pubs and they all ask me the same thing. They all say Polk, where is the Justicar and Escalla? What happened to the Paul Kidd? Why did he stop chronicling the adventures of the two greatest heroes and lovers of our time? They could've been great, son! They could've been as great as Drizzt Do'urden, Elminster, Cadderly Bonaduce & Danika, the Dragonlance heroes and so many others.  Son, I knew when they turned me into a badger that my writing days were behind me. I can't hardly hold a bottle in these clawed paws much less a quill but you, son, You can still take up where I left off. I'll even make you my official apprentice, son, but you gotta redeem yourself to your fans, son. Greatness doesn't come that easy. I thought I taught you better than that, son??? Everybody asks me, they say, "Polk, when is Paul Kidd going to resurrect the greatest characters of Greyhawk? When's he gonna tell us more about the Justicar and Escalla, the faerie?" I make them buy me a drink to get my answer but I can only make excuses for your dereliction of duty, son. You've let us all down, son. You're one of the most prolific authors of our time and this is how you're going to go out? O, no son, it's just not done this way, son. It's just not done... (Note from the scribe: Polk the badger continued to rant but I'm ending this letter here because I unfortunately know how long winded he can be. My finger is tired of punching these buttons and I'm signing off. Just know that Polk is passionate about his friends and his fans who miss him, the Justicar, Escalla, Cinder and the entire world that you , Paul Kidd, have created in that marvelous mind of yours. I'm sure that Polk will forgive you eventually but Badgers do hold a mighty grudge when they get angry. I can only imagine that writing more tales of the Justicar and Escalla would mollify his anger and SHUT HIM UP! PLEASE, for the love of the gods, Mr. Kidd, bring these characters back to life once again!) Sincerely yours, Polk the Teamster Badger, hero & chronicler of the Greyhawk heroes of legend.

This is one of my favorite series and the narrator really captured the characters well.

Paul Kidd really needs to continue the adventures of this loveable band. He could write and insanely popular series on them alone.

I really liked and enjoyed this entire series, wish he had written more... Characters develop as the series progresses... I have read the series several times, and listened to it twice now.

A fitting end to an amazing cast of characters

Once again Paul Kidd produces another amazing, entertaining, and funny story. Unfortunately this is the last book in the GreyHawk series featuring the Justicar and his group of friends. However I have to say that everything was wrapped up perfectly. The performance of Bernard was simply divine, and I found myself on the edge of my seat while listening to this thriller of a book. While I am saddened that I will never be able to hear about Escallas mischievous ideas or plans, Inid's poetic and knowledgeable voice, The oddly soothing and funny voice of Cinders, or the justicars deep and commanding voice, I am rather pleased with how the tales of these misfit heroes ended, and I would recommend this book to anyone in a heart beat.

This is the last episode in Justicar and The Fairy series and it proves an excellent conclusion to their fun adventures. Perhaps a bit silly in places, this book actually manages to capture the feel of a well run D&D campaign, and brings to a very satisfying conclusion the story of the party.

Not what I was expecting

I know this is a Greyhawk, but, at times i felt the author lost his way, pit stop in Ravenloft and almost rather risque. That much detail isn't required in a book like this.

I wondered how they would approach the story with the existing characters and I was not disappointed. I remember playing this with my brother and his friends and being frustrated because of the mysterious situations. The story was written well keeping that element alive and throwing the team into a battle with a demi-god.

What a great sequel to the Justicar and Escalla saga. I strongly recommend those three books. I hope there will be more. Does not hurt the performance by Benard gets you deeper into the story

Another return to the D&D classics!

Listened to this on Audible audiobook - another in the series based on classic D&D modules. This story was not as engaging as the previous ones in the series, but it was still enjoyable - recommended if you enjoyed the others in the series!