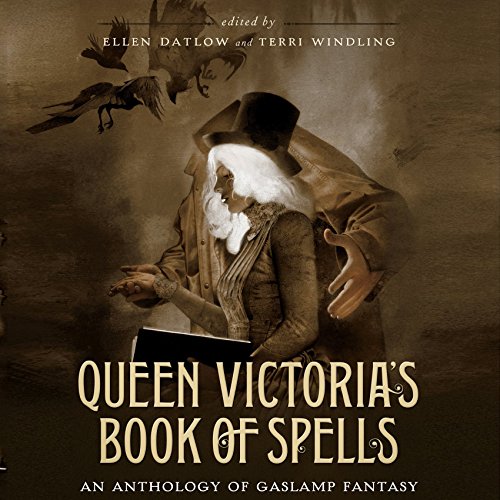 "Gaslamp fantasy", or historical fantasy set in a magical version of the nineteenth century, has long been popular with readers and writers alike. A number of wonderful fantasy novels, including Stardust by Neil Gaiman, Jonathan Strange and Mr. Norrell by Susanna Clarke, and The Prestige by Christopher Priest owe their inspiration to works by nineteenth-century writers ranging from Jane Austen, the Brontes, and George Meredith to Charles Dickens, Anthony Trollope, and William Morris. And, of course, the entire steampunk genre and subculture owes more than a little to literature inspired by this period.

Queen Victoria's Book of Spells is an anthology for everyone who loves these works of neo-Victorian fiction and wishes to explore the wide variety of ways that modern fantasists are using nineteenth-century settings, characters, and themes. These approaches stretch from steampunk fiction to the Austen-and-Trollope inspired works that some critics call "fantasy of manners", all of which fit under the larger umbrella of gaslamp fantasy. The result is 18 stories by experts from the fantasy, horror, mainstream, and young adult fields, including both best-selling writers and exciting new talents such as Elizabeth Bear, James Blaylock, Jeffrey Ford, Ellen Kushner, Tanith Lee, Gregory Maguire, Delia Sherman, and Catherynne M. Valente, who present a bewitching vision of a nineteenth-century invested (or cursed!) with magic.

What listeners say about Queen Victoria's Book of Spells

Fans of nineteenth-century literature and fantasy will find Delight in this selection! I felt I was Taking a Chance on this particular anthology because of the negative reviews, but I am so glad that I did take the time to listen to it. After the first story, the narrator gets her wind and sails onto a stellar performance. In my opinion, the last tale was the best.

A Delicious Entrée to Gaslamp Fantasy

According to Amazon, Gaslamp fantasy is "historical fantasy set in a magical version of the Nineteenth Century." While its first cousin Steampunk emphasizes mechanics, science and steam power, Gaslamp plays with magical possibilities.

This anthology includes spinoffs of Dickens and references to real people of the Victorian era. Queen Vicki herself gets a cameo in at least two stories. One of her prime ministers, Benjamin Disraeli, stars in The Jewel in the Toad Queen's Crown while William Morris, textile designer, poet, translator and social activist, takes the stage in the story For the Briar Rose. This is definitely one of those books that whets your thirst for more information. I have a brand new fascination with both Morris and Disraeli and can't wait to see where these rabbit holes lead me!

I listened to the audio version of this book. It's one I wish I had read instead. Three of the stories are epistolary, which sometimes doesn't lend itself to audio. The performance by narrator Kelly Lintz was fine, but it's a book to dip into again and again. I will probably end up buying a physical copy for my shelves.

The list below includes what I felt were the standout stories:
Queen Victoria's Book of Spells by Delia Sherman (Epistolary - entries in a young Victoria's diaries as she learns magic)
Phosphorous by Veronica Schanoes (Some very interesting social history here.)
The Vital Importance of the Superficial by Ellen Kushner and Caroline Stervener (Epistolary, and superbly done.)
A Few Twigs He Left Behind by Gregory Maguire (A fascinating epilogue of Scrooge)

Maguire's offering in particular left me hankering for more of his writing (which surprised me because Wicked (the book) was not a big winner with me). I will also seek out works by Delia Sherman and Ellen Kushner. Book one of the Tremontaine series (Kushner) has been ordered…

I could listen repeatedly this is a exciting creation. Well worth the time money memories.

Just couldn't get into these

These stories are shallow. The narration is cartoonish - a faked little girl voice. The stories themselves lack originality. Boo

I was okay for the sample

...but about 15 minutes into the first story about Victoria's Book of Spells, I couldn't take the combination of smug, plummy-toned dramatization (combined with the author's patently obvious dislike & chip on her shoulder the first writer has for nonUSians, specifically British culture.) seemed okay for a few minutes. But it went on & on...! How someone with such US national exceptionalism writes a short story with Queen Victoria as a vehicle is bewildering. What was her motivation? ...to snark?

I just couldn't enjoy it. I was relaxing in the tub & it went from odd, to confusing to so aggravating that I had to get out, towel off, blow out the candles & do laundry.
Suffice to say, the self-satisfied notes in the performer's chosen style carried the same impression into the subsequent readings.
I'm sure it was just the combination of the first story with the first writing style. Maybe if they hadn't occurred together? Maybe they resonated off each other?
I tried to get into the other ones, but gave up, as it all blended together into one nails-on-a-chalkboard experience.
I really wanted to like this, but I'm not about to try as hard as I did for simple fantasy fiction.

Not for me. I wish I could return it, even for a partial credit.

I would have loved to like this book, but unfortunately the narrator spoiled it for me, sounding like she was forced to read the text. I did try to pick the book up multiple times over the last month or two, each time failing to muster enough resolve to keep on listening for more than 15-30 minutes at a time.

Maybe the stories would have been more interesting if read by someone else. However, as it stands, the ones I did get through felt shallow and didn't seem to go anywhere. It could be that there's a gem hidden somewhere in there and I just never got to it, but I seriously doubt it would have been worth the effort to keep on dredging through this book.

Life is too short and there are plenty of good books read by great narrators out there. This just isn't one of them, so save your time and go listen to something else.

Although the stories are intriguing if verging a bit on anglomania fan fiction, and the narrator has several serviceable British accents. They do slip a bit and more practice with place names would be required to not jar a native British listener.

My two favourite examples are the Hebrides islands pronounced hee-brides, and Queen Victoria becoming Scottish when she gets angry.