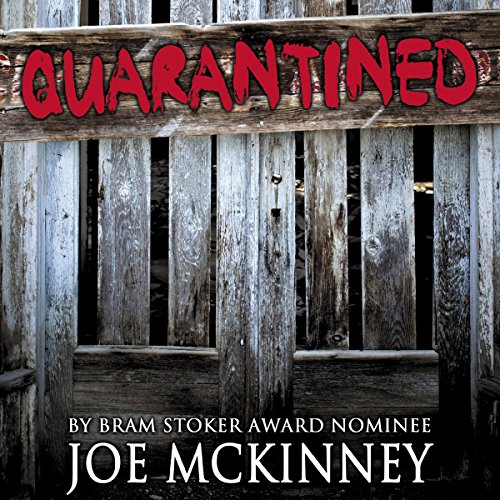 Award-winning voice actor Therese Plummer gives an enthralling performance of Joe McKinney’s novel Quarantined. She lends her melodious voice to protagonist Lily Harris, a detective in San Antonio, Texas, working under stressful conditions. The city has been quarantined due to an outbreak of a deadly flu virus. Bodies continue to pile up. One day, she discovers a murder victim among the dead. As she gets deeper into her investigation, a new strain of flu hits just as she discovers a major government conspiracy. Will she survive long enough to uncover the truth?

The citizens of San Antonio, Texas, are threatened with extermination by a terrifying outbreak of the flu. Quarantined by the military to contain the virus, the city is in a desperate struggle to survive.

Inside the quarantine walls, Detective Lily Harris is working burial statistics duty at the Scar, San Antonio's mass graveyard, when she finds a murder victim hidden amongst the plague dead.

But Lily's investigation into the young woman's death soon takes a frightening turn as yet another strain of the deadly flu virus surfaces, and now Lily finds herself caught up in a conspiracy orchestrated by a corrupt local government intent on hiding the news from the world and fighting a population threatening to boil over into revolt.

As the city erupts in violence, Lily is forced to do the unthinkable. With the clock ticking toward annihilation, Lily must lead her family through the quarantine walls and escape with news that just might save us all.

What listeners say about Quarantined

Remember the H2N2 flu virus (shades of the Alamo!)

I'm not sure yet. Only in Chapter 2. But narrator dropped the ball, big-time - and it is affecting my overall listening experience. (See question #3)

If you’ve listened to books by Joe McKinney before, how does this one compare?

So far, the book story itself is interesting. The narrator's performance is pretty much "unprepared". (See next question.)

San Antonio, the location of this tale, is located in BEXAR County, Texas. It is NOT pronounced "Becks-are" County, it is correctly pronounced "Bear" County. Which anyone who had looked it up prior to recording this book SHOULD have known. Poor prep by Therese Plummer. It's like fingernails on the blackboard. Makes me mad everytime she does it. (Of course, non-Texan listeners probably won't know the difference.)

Maybe. If they can pronounce "Bexar County" correctly.

Narrators should CHECK OUT pronounciations for proper noun place names before recording the book!

with a touch of suspence

the story line was a classic who done it mystery. It had me guess the whole way through.

I did not at all enjoy this book, but I'm a bit spoiled after reading a book called "Flesh Eaters" by the same author. If you're determined to listen to a McKinney book, "Flesh Eaters" has nearly the exact same premise with more dynamic characters, more danger, and more intrigue. While "Quarantined" is buddy-cop, "Flesh Eaters" is thriller.

If you could sum up Quarantined in three words, what would they be?

Have you listened to any of Therese Plummer’s other performances before? How does this one compare?

No, but she did a good job, except for pronouncing the name of Bexar county wrong.

Pronounce the name of the county correctly! I live in South Texas and I'm sure everyone who lives in Texas knows Bexar county is pronounced bear, not Bex-ar. This bothered me quite a bit every time I heard her say it.

Edge of your seat!

Yes! I thought the story-line moved very well and kept my attention, which I was really surprised. This is so not my usual type of book! The ending was one of those edge of your seat type build ups! Definitely one I will re-listen to later on.

What was one of the most memorable moments of Quarantined?

The very end of the book. The main character and her family escape and live to tell the world.

Which character – as performed by Therese Plummer – was your favorite?

I thought she did a wonderful job with all of the characters. She stayed in voice throughout and it was very easy to tell which character was which.

Definitely! I tried too!

Learn the name of the County!!

It was very disturbing that she didn't even pronounce the name of the county correctly. Every time she said "BEX - AR" it made me cringe. Good lord, if you're going to get paid to read a book, learn how to pronounce the subject matter!

It could happen, and the frightens me

Quarantined has been in my wish list for some time, there was always something else that seemed more appealing, until finally I took the plunge and picked this up. I know of Joe McKinney from the Dead World series, have yet to listen to it, therefore I am hopeful that zombies will have a roll with the plague that has ravaged the world. But judging from the reviews I have read having no mention of the undead I am doubtful.

I was right being doubtful of there being zombies, oh well, this was still an intriguing and thought provoking. Quarantined is a psychological exploration of what could happen to a community if and when a fatal virus breaks out and the government tries to contain the situation. Starts out a police drama looking for who dunnit, even though this would be the last thing on my mind if I was condemned to die behind a huge wall. McKinney’s real life experience as a homicide detective gives Quarantined real bite as he guided me through departmental politics and bureaucratic red tape. The during investigation the true situation, the anarchy and social unrest, becomes apparent. Most of what I enjoyed about Quarantined was just how real it all seemed, a totally plausible plague, reaction to the plague, the social breakdown into spurts of anarchy that is created by the plague, this all made me wonder what would really happen. I really had only one thought after finishing Quarantined, it could happen, and the frightens me.

It took me almost half of the audiobook to get in to the narration by Therese Plummer. To me she sound like a very unenthusiastic reader who didn’t really believe or enjoy the story to start with. As the story progressed so did her narration, the more she got invested in the story the better her performance.

A Fine Mystery, With a Few Cringe-worthy Moments

An overall enjoyable mystery. I appreciate a strong female lead, but Lilly disappoints when she describes gay male characters as

Would you recommend Quarantined to your friends? Why or why not?

Unfortunately I cannot recommend this audio book to my friends. The heroine's weird character flaw comes off as narrow-minded and prehistoric.

Would you try another book from Joe McKinney and/or Therese Plummer?

I have all of Joe McKinney's other books and like them.

Could you see Quarantined being made into a movie or a TV series? Who should the stars be?

No, story is not that good.

FYI this is NOT a zombie novel. I was expecting something different but it is a OK murder/mystery. There are several parts that leave you saying

Okay. First things first. This book has nothing to do with zombies. Absolutely nothing...

What it is: a murder/detective story set in a city that was quarantined because of a viral outbreak that kills nearly 20% of the people it infects.

It was pretty realistic... well, the setting and goings-on (riots, looters, fear) that occur within the quarantined city was realistic. The belief that a government would be able to successfully seal off a city with flown in barricades before someone "escaped" to spread the virus to the rest of the country was a bit on the naive side. When the virus that ends up jumping species to wipe out 20-30% of us finally does arrive, it will be spread much much too fast for any government to lock it down as quickly as they do in this story.

It wasn't very original, or stunningly written, but it was a decent story, with engaging enough characters that they don't really drive you crazy. The main character was female, and the author does need a bit more experience living as/with a woman because the woman here is written as a stereotype... (i.e. an entire scene is written around her having a bath and shaving her legs... like that would be a priority in a virally infected world where she has a murder to solve). I won't mention the lame sex scene (it should have been left out it was that pathetic). And there are periodic (and fortunately short) tirades about women's self-esteem as affected by magazines, Republican suppression, and evil organizations who would rather let millions of people die than lose out on potential profits. You won't be left wondering how the author feels about any of these topics.

Anyway... it's a quick read, with some insights on what "real life" might be like in a quarantined city... and what challenges a detective might face while trying to solve a murder under these circumstances. I'd read more by this author, as long as I was prepared for uninspiring characterizations and a heavy reliance on stereotypical physical descriptions and behaviours.

I didn't mind the narration - it wasn't intrusive, and I didn't notice any mispronunciations (other than a couple HWO instead of WHO), but, then again, I'm not from Texas. It is not gory or graphic and I don't think there was any swearing.