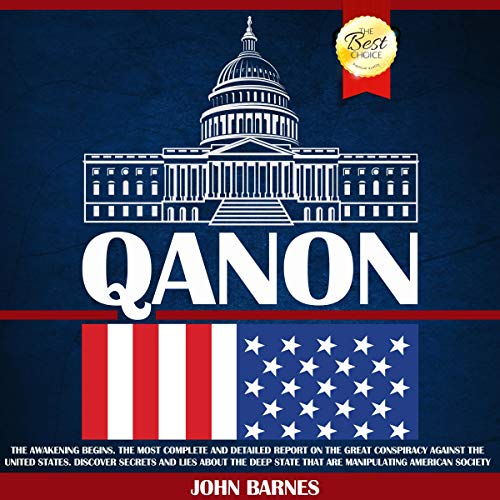 If you don’t know QAnon or if you have a vague knowledge of this QAnon movement and if you truly value the truth, you will want to find out about the QAnon movement and the fight that is being pursued for your sake to guard you and your youngsters from misuse and oppression.

The fight between good and evil is not symbolic anymore. Evil is being tested and brought upon the equity in government courts and military councils as of today. Criminally degenerate government pioneers, the famous individuals, religious leaders, media figures, and corporate heads will be tested and penalized for violations including injustice, human trafficking, ritual sacrifice, and unspeakable corruption.

This audiobook educates and unveils the significant piece of the truth that has been meticulously covered up and wrongly defamed by the media. It uncovers a phenomenal development in progress, a clash of amazing proportions. Regardless of whether you know it or not, you're included on the grounds that the consequence of this fight will decide the destiny of your children and people in the future both in America and around the globe. Be that as it may, you may just be enigmatically mindful of QAnon or "Q", if by any means.

Let us look at some very important things you will learn in this audiobook:

This awesome audiobook tells the historical background of a mysterious banner on the free-discourse sites 4Chan and afterward 8Chan and how he (or maybe they) assembled an after of a large number of watchers around the world. With an insider's information on the battle plan, and "Q" level military knowledge leeway, QAnon's communications are frequently cryptic and coded. QAnon is an ace of the Socratic technique, posing inquiries and encouraging supporters to do their own examination, to be analytical, and to challenge themselves to think.

Have you been persuaded by legacy media assertions that Q is a fraud or a "conspiracy theory"? Instead, ponder upon why the media would demand that you, a reasoning and able grown-up, ought to ignore Q at all cost? On the off chance that a simple "conspiracy theory", why all the recognition? What thoughts are so risky you ought to never hear them? Is there another side to the story?

Read QAnon: The Awakening Begins. The Most Complete and Detailed Report on the Great Conspiracy Against the United States. Discover Secrets and Lies About the Deep State That Are Manipulating American Society and decide for yourself!

Buy now to get started!

What listeners say about QAnon

More miss information, conflating issues to make it seem like it all comes from one place, not informative just more muddying of the water

Such An Important Audio Book!

This audio book is telling the side of Patriots that support POTUS and the Q movement. The audio book is great, very much appreciated.

I think this book is the best book of the topic.

One of the best audio book recommendations I've ever received. The way the author stablish the dog training concepts and compare them with things such as rising your kids is incredible useful and truth.

This is best audio book i ever seen.

This is a great explanation of a very convoluted and corrupt story. It explains how the good guys exposed and took down the world Cabal.

This audio book is a great invitation for anyone who might be skeptical about the Plan To Save the World.

This audio book helps connect the dots that won’t be seen or heard on mainstream media. What’s happening today is not how things were meant to be.

I highly recommend it

Amazing! Super easy to understand and informative. It broke down complicated information to simple understanding. I highly recommend it!!

I really liked this audiobook..

I really like this, this have made me so happy, so happy! A must listen. I bought the audiobook instead and it was great. Thank you.

This audiobook confirmed many things that God has been placing on my heart and mind. This audiobook helps Patriots , and red pills others.

An easy to understand this audiobook...

The audiobook is an easy understand. And like the headline says, if you watch Freedom Force Battalion, it's her voice through and through. There is an update that you have to download from the YouTube community page.

The audiobook has amazing expansion

The audio book has amazing expansion and significance, and I am certain that anyone will watch this audio book to empower and possibly exceptional in its ability to take the scrutinize to the accompanying measurement.

Unveil the truth and save our future.

The significant piece of the truth that has been meticulously covered up and wrongly defamed by the media.

Honest and good-heartened people who want the truth, no matter how painful, will listen this audio book and join a world-wide awakening with the millions and fight for our future.

QAnon movement and battle for our lives.

If you want to find out about the QAnon movement and the fight that is being pursued for your sake to guard you and your youngsters from misuse and oppression, then listen this outstanding audible.

Filled with important information of awakening.

A great audio book for anyone looking to discover secrets and lies about the deep state that are manipulating American Society. I feel really great to know about the awakening.

This audio book is absolutely best one

I listen some of QAnon audio book it's one of the best audio book for listening. This audio book cover lots of things about the deep state that are manipulating american society.

Please order the audio book then begin to do your own research, there are many good people on You Tube that are working to deliver the truth to those who want to hear it.

Loved the info. Easy to listen and so informative. The proofs were amazing. GREAT for sharing with other. Thanks.

One of the best audiobooks recommendations

One of the best audiobooks recommendations I've ever received. The way the author establish the dog training concepts and compare them with things such as rising your kids is incredible useful and truth.

This is a great audiobook.

This is a great explanation of a very convoluted and corrupt story. It explains how the good guys exposed and took down the world Cabal.

This audiobook is a great invitation

This audiobook is a great invitation for anyone who might be skeptical about QAnon. It explains how a group within our government structure has been planning and organizing a retaliation against those who would do us harm