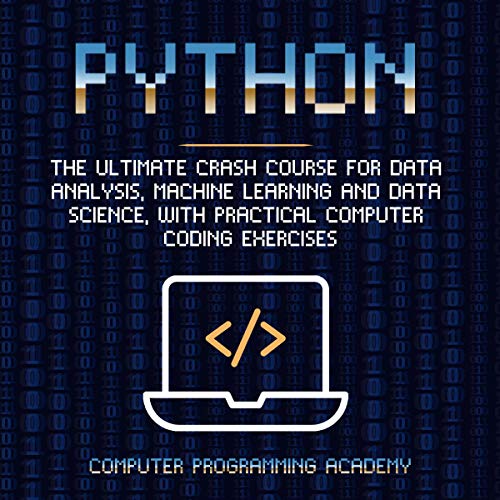 If you work in data science, or if you are hoping to make it your career, Python is a must!

It’s no secret that many jobs will be eliminated in the near future. While that reality may be difficult to digest, it’s also believed that the most responsible party - namely, automation - will lead the way in a golden age of opportunity. That’s because there will be a tremendous need for people who are capable of programming all those new systems. And, the language of choice for machine learning software is Python which, as it happens, is the perfect first language to learn.

Python has now toppled Java to become the most taught programming languages in universities and academia! Learning Python not only will make you a polyglot programmer, but also gives you a powerful tool in your arsenal to write scripts, create a web application, and open the door to the exciting fields of data science and machine learning.

In this audiobook, you will learn the fundamentals of Python. Here is a preview of what you’ll learn:

It’s important to know programming and coding in today’s world, and if you don’t know coding you are missing something important. Python is a great way to start learning to code.

What are you waiting for? A few dollars spent are the value of your skill improvement? It’s definitely possible to learn Python on your own. To learn it, steps by step, click on the "buy now" button and start learning!

What listeners say about Python

I really love this book. This procedure can be useful, accepting it is utilized effectively and can be tried effectively by both human and man-made reasoning too.

The contents of the book are better than its manufactured quality. Sadly, less than a week after receiving it, the cover came free of the rest of the book. It was apparently only held on by two narrow strips of glue on the first and last pages, and no glue holding it to the actual spine!

A great introduction from great author!!

Let me preface this review by saying that I have zero programming experience. I'm only four chapters into the book and I gotta say - Python is finally making sense to me!

I was recommended this book by my computer science professor for a C++ class. I wanted to learn python on my own and I can say, it's a very easy book to follow, especially compared to C++. I highly recommend it to anyone wanting to learn python l.

I really enjoyed this audible!!

This book guided me step by step to understand and apply various python concepts. Additionally, it has some exercises that you have to do in order to solidify your understanding.

Well listen the price of the audible.!!

I have taken many online courses for python, however, as a beginner in software development, I could not comprehend.

I have been trying to find an easy intro to Python for a month now and this book is by far the BEST one that I have seen for beginners to programming with Python!! A must-have!

Interesting to listen to!!

A great deal of important vocabulary is weaved into the material.I wish that the legit answers to the programming exercises were available somewhere to compare my code with.

What an excellent resource!

This book has everything related to Python. It has guidelines for beginners like me, for semi-pro people and also for the people who we think as our idol. I found this book to be very informative, well ordained, and really as a life long trainer.

This is a complete Python programming bundle - for those starting from scratch, the first book will discuss all the basics, for intermediate users the second book is about more complex programming and the third book brings it all together for advanced programmers. Well written and easy to follow.

Just finished the book and followed the code all way, even did some of the "Try this yourself" exercises. Very well organized. 6 stars on that. The code in the book was accurate and worked as expected.

However, I wish it comes with an answer for those after chapter exercises. Otherwise, it becomes meaningless because you won't know if you got it or not. Overall, well explained but somewhat too much explanation. Thus, this might be good for people who do not have any programming skills. Also, words are simple and straightforward.

What is good about it? It teaches you the basics of Python But it does not have any advanced materials inside. Evey little example is well explained. It has a lot of examples are presented.

For all who want to compare the 1st to the 2nd edition, here the Preface to the Second Edition.

I have had this for one day and the cover is already coming off. Nothing a little glue won’t fix, and that’s the downside of paperbacks that you have to put weight on to keep closed, in my opinion.

Well listen the price of the audible.!!

Very helpful and straightforward! Got it to help with a class I'm taking that didn't really cover it very well, this has helped to fill in the gaps and clarify things for me!

A Very helpful and useful audible !!

I think there is an opportunity to include more examples and expand the book's reaches with some exercises and answers which is really valuable when you are in a learning path.

Interesting to listen to!!

I definitely recommend this book to anyone interested in learning python. This book is fairly comprehensive. I am trying to learn python programming and this book is great. It's clear, easy to listen. Worth to buy it.

What an excellent resource!

This is a good book for someone who is interested in learning python; especially if you do do not have any background in programming. Unfortunately, the location of example files is incorrect, and he only touches a little bit on a lot.

If you want to learn python then get this book. This book will guide you about that. A perfect book for that. A helpful book for beginners.