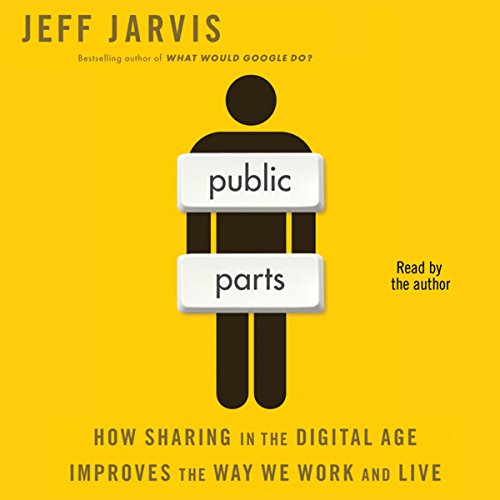 How Sharing in the Digital Age Improves the Way We Work and Live
By: Jeff Jarvis
Narrated by: Jeff Jarvis
Length: 8 hrs and 17 mins
Categories: Non-fiction, Social Sciences
3 out of 5 stars 3.3 (4 ratings)

A visionary and optimistic thinker examines the tension between privacy and publicness that is transforming how we form communities, create identities, do business, and live our lives.

Thanks to the Internet, we now live—more and more—in public. More than 750 million people (and half of all Americans) use Facebook, where we share a billion times a day. The collective voice of Twitter echoes instantly 100 million times daily, from Tahrir Square to the Mall of America, on subjects that range from democratic reform to unfolding natural disasters to celebrity gossip. New tools let us share our photos, videos, purchases, knowledge, friendships, locations, and lives. Yet change brings fear, and many people—nostalgic for a more homogeneous mass culture and provoked by well-meaning advocates for privacy—despair that the Internet and how we share there is making us dumber, crasser, distracted, and vulnerable to threats of all kinds. But not Jeff Jarvis.

In this shibboleth-destroying book, he argues persuasively and personally that the Internet and our new sense of publicness are, in fact, doing the opposite. Jarvis travels back in time to show the amazing parallels of fear and resistance that met the advent of other innovations such as the camera and the printing press. The Internet, he argues, will change business, society, and life as profoundly as Gutenberg’s invention, shifting power from old institutions to us all.

Based on extensive interviews, Public Parts introduces us to the men and women building a new industry based on sharing. Some of them have become household name: Facebook’s Mark Zuckerberg, Google’s Eric Schmidt, and Twitter’s Evan Williams. Others may soon be recognized as the industrialists, philosophers, and designers of our future. Jarvis explores the promising ways in which the Internet and publicness allow us to collaborate on how we manufacture and market, buy and sell, organize and govern, teach and learn. He also examines the necessity as well as the limits of privacy in an effort to understand and thus protect it.

This new and open era has already profoundly disrupted economies, industries, laws, ethics, childhood, and many other facets of our daily lives. But the change has just begun. The shape of the future is not assured. The amazing new tools of publicness can be used to good ends and bad. The choices—and the responsibilities—lie with us. Jarvis makes an urgent case that the future of the Internet—what one technologist calls “the eighth continent”—requires as much protection as the physical space we share, the air we breathe, and the rights we afford one another. It is a space of the public, for the public, and by the public. It needs protection and respect from all of us. As Secretary of State Hillary Clinton said in the wake of the uprisings in the Middle East, “If people around the world are going to come together every day online and have a safe and productive experience, we need a shared vision to guide us.” Jeff Jarvis has that vision and will be that guide.

The piece by Jeff Jarvis is an necessary document about the world that being created right now online. The fact that i can write this review and that it will potentially have pull in how this work is viewed is a testament to the topics and arguments in this book. Audible isn't trying to tell you what to read. It instead is using a small slice of my willingness to share to pass judgement. If you are at all interested in what drives the claims of "privacy concerns" on today's digital world, please read this book.

At times I really like Jeff Jarvis and there are times he is plain annoying. (kinda describes most people - doesn't it.). Regardless, you have to respect his positions and the excellent points he makes in Public Parts. Jeff explains how much of our concept of privacy is only a recent creation and how many times living in public can improve life. He also explains some of the misplaced panic that legislators seem to think is there duty to protect us from ourselves. Lastly, Jeff explains how our Internet is a danger of being taken away from us as old media struggles to recover their lost markets and the control of society they have long enjoyed. This by no means all of the jam packed information Jeff has put in this book. If you have interest in the future of media, the Internet or your ability to be public or private please enjoy Public Parts.

Jeff does a great job of reading his own book. He has made me rethink think my position on privacy.

Would have made a better magazine article

Enjoyable and highly listenable book on how our perceptions are changing regarding privacy and how in general it is very beneficial for us.

While listening, I kept harping back to some other books I've recently listened to and for which I thought the similar topics in this book were covered much better. The books are 1) Too Big to Know, The smartest person in the room is the room meaning the internet we have at our fingertips empowers us like never before 2) Tipping Point, networking and crowd sourcing multiples who we are, 3) In the Plex, a real history of Google that demonstrates that Google is much more than a search company and 4) Master Switch, how the gateway to the net (be it ATT telephone network or Google) gives the master switch owner unparallelled powers.

He does cover each of those themes in the above listed books and I loved the overall theme of his book, but I just think the other books covered the topics much better. Also, I think his book is weakest when he talks about what should be and he implicitly assumes a utopian world that probably wont ever exist.

Has Public Parts turned you off from other books in this genre?

If you could play editor, what scene or scenes would you have cut from Public Parts?

The author spent too much time both praising Facebook and defending Facebook's darker side. The book quickly began to sound like a sales pitch for Big Brother, Social Media, and Facebook in particular.

He knows what he's talking about.

Would you listen to Public Parts again? Why?

I probably will. It's just a quick and easy listen about topics that interest me.

What does Jeff Jarvis bring to the story that you wouldn???t experience if you just read the book?

It's his words spoken by his own mouth. Less personal interpretation since I can hear his own inflections.

the future of your information

Jeff Jarvis does a deep dive into the good, bad and ugly of sharing info on the web. Especially helpful is his balanced discussion about the intended and possibly unintended consequences when info from personal web browsing is mashed up with info from third parties. Beyond that, Jarvis shines a light on how leading edge entrepreneurs are building new businesses built upon the ever expanding trove of info available with the click of a mouse. Finally, Jeff Jarvis narration is first rate.

This book is a pleasure to listen to and I especially enjoyed it since I am a fan of his on twit.tv. I am on my second listen since the first listen was so good. He is articulate, knowledgeable, compassionate, and courageous.

If you want a motivational story, tech testament, and a richness of experiences I would recommend this book. We need more people in the world like Jeff Jarvis.

Jarvis is a excellent conveyor of these concepts and this is an adept overview of how the online experience is changing how we deal with privacy, sharing, information flow and our uncomfortable feeling surrounding TMI. As we all become used to the concept of a shared online experience, the information in this book will seem a little dated. So read now. I gleaned a dozen great ideas from these audible pages.

Jeff Jarvis's "What would Google do?" was excellent - this is better. To be honest, I chose it because I'd enjoyed the previous book so much and appreciate what Jarvis has to say on many topics, even when I don't agree with him.

This is a book about how our attitudes to what is private and what is public will come to shape the future of the internet. Packed with personal experience (Jarvis practises what he preaches) and the occasional funny moment (Germans in saunas) this book seeks to focus the debate on this topic - a debate that, at the moment, is too often characterised by knee-jerk emotional reactions.

A thoroughly enjoyable listen - Jarvis makes for a good narrator too - I recommend this most especially for those of us working in the internet industry but also for anyone with a social media or web presence. Which is everyone, more or less.

An interesting view of the ethical issues of privacy and publicness (his word), but his thesis has not developed to encompass non-American societies. The assumption that everyone is like the Americans (and, even narrower, internet savvy Americans) jars.

From Gutenberg to Blogger to Twitter, this is all perfect sense from Jeff. I can't recommend this book highly enough.