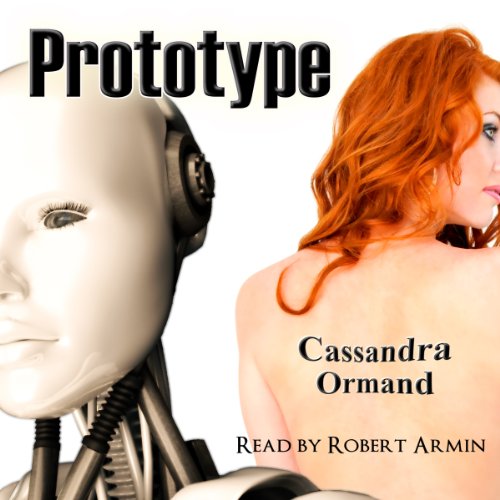 Angelique Hunter works for a cutting edge robotics company programming and designing some of the most lifelike robots in the world. Her latest accomplishment is a robot created in her own image. A perfect replica of herself down to the smallest detail. Her only regret is that her invention is being sold exclusively for personal entertainment. Everything changes the day she discovers her skills have been used to build a killing machine.

Now she's running for her life, pretending to be one of her high-tech creations, and praying that no one discovers her secret.

What listeners say about Prototype

What disappointed you about Prototype?

First, let me say, I allow for authors learning their trade, so I will not be sarcastic here. This book would gain much from any editing, but someone other than the author. The number of redundant statements is voluminous. The author mistook restating things like "if someone walked in now, it was the end..." She restated this in 6 sentences in a 8 sentence paragraph. In fact redundancy was a redundant theme. I think the writer thought that be restating the obvious she could intensify the feelings she was trying to describe, but instead it was distracting.The overall emotionality played out at a 4th grade level, also. The main character was a long-time job-only geek, whose beauty is without equal. She meets a sensitive, emotionally-connected, handsome multibillionaire. They both fall in love in about, oh, 3 hours book time. A sex scene is included, but it turns out to be formulaic. Every character other than the main character was a cardboard cut out. No depth other that stereotypical males. The main character's best friend was killed but had no more important that a balloon popping because she died just as we learned they were best friends. AND then the main character gets all whiney blaming herself for something she had no idea could happen with it did. In other words, the author wanted a brooding, complex character and had no idea how to get there without just saying, "hey, this is an intense, brooding character who takes everything on herself." Oh, turns out her boyfriend of 24 hours is also an intense, brooding male with a heart of gold.The last issue in the writing was the constant use of clichés. Some clichés can add to the sense that characters are real, however combined with overly formal language, or Yoda Speak, the effect is weakened. Using too many clichés too often gets annoying.As I said, a good, tough editor would help immeasurably.

Would you ever listen to anything by Cassandra Ormand again?

Only if it was free and only to see if she has improved her writing. A ten minute free listen on Audible would be enough to check that out. BUT NO, not without that listen. I could not complete the last 2 hours and intend to return it.

Oh, god, yes. First, YOU can NOT emphasize EVERY other WORD. When YOU do EMPHASIZE every OTHER word, THE listerner IS continuously THROWN off THE structure OF the SENTENCE and THE point OF the SENTENCE. This form of reading does not allow for subtle character moves, where the narrator shifts from one character to another with subtle shift of tone and speeds. I had to work hard much of the time to figure out who was saying what in scenes where several characters where involved. The producer of this audio book should be told to listen to some of the better narrators and understand what good readings sound like. Sometimes the changes in character the narrator tried to crate could be hilarious. I had to replay the section after I got over my tendency to laugh. I could hear from time to time that this narrator could be a decent reader, but they need careful guidance from a good producer. The net effect was that I was too aware of the narrator and his quirks and that distracted me from the story.

The writer also needs to do some basic research into the sciences. The diabolical, evil mastermind billionaire, which she used in her description, was going to substitute a body for the main character after the main character is thought dead... like DNA or finger prints is not known in the future? A single person's apartment is a wealth of DNA and finger prints. So the diabolical evil genius' plan would fall apart in about 15 minutes. A suspense/crime Sci-Fi writer has to understand all of this.