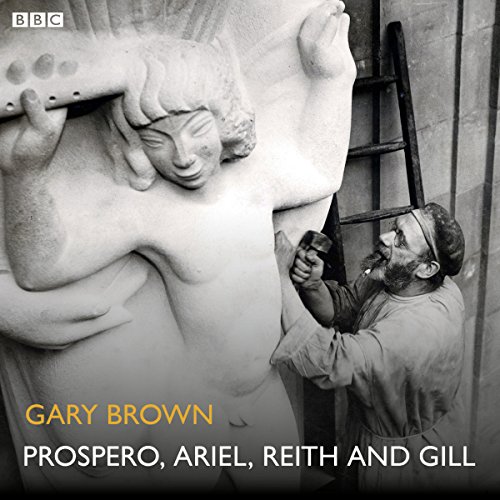 Here is Gary Brown's BBC Radio 4 full-cast comedy dramatisation about artist Eric Gill's clash with the BBC over his famous sculpture of Prospero and Ariel. It stars Anton Lesser as Eric Gill and Tim McInnerny as Sir John Reith, the first Director General of the Corporation, and was originally broadcast in the Afternoon Play slot on Wednesday 9 June 2010.

Inspired by real events, the play charts a clash between the BBC's governors and the artist over the propriety of the sculpture's appearance.

Gill became quite a celebrity as he carved the statue in situ on scaffolding in front of Broadcasting House. In his trademark smock and beret, he drew the attention of the tabloid papers and became known as the ‘Married Monk’. The play imagines conversations between Sir John and the artist as he passes him on his way into Broadcasting House each morning.

Framed with a period newsreel-style commentary, the comedy playfully deals with the perennial tension between the Establishment and the Artist. The strange and mysterious Gill contrasts with the authoritarian but often troubled figure of Reith, but in the end the sculpture focuses their thoughts about the role of Art in the life of mankind. While this is a comedy, the play touches a little on the well-documented darker side of both men's nature, and offers an insight into one of the more celebrated events of early BBC history.

The cast is completed by Jon Glover as the Newsreel Reporter, David Seddon as Charlie, Stephen Darcy as Father Sean, Tina Gray as Lady Snowden, and Alison Pettitt as the Nanny. Written by Gary Brown and directed by Peter Leslie Wild.

What listeners say about Prospero, Ariel, Reith and Gill