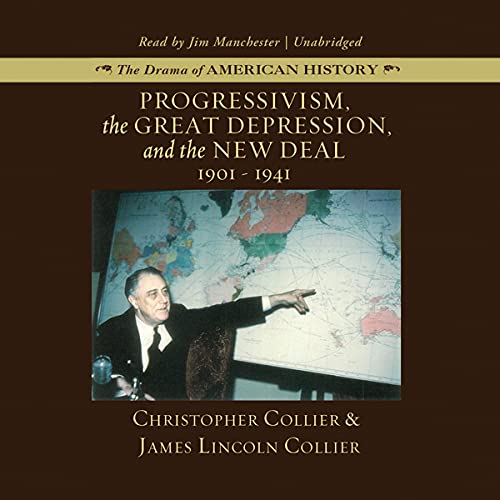 Progressivism, the Great Depression, and the New Deal

History is dramatic - and the renowned, award-winning authors Christopher Collier and James Lincoln Collier demonstrate this in a compelling series aimed at young listeners.

Progressivism, the Great Depression, and the New Deal emphasizes economic trends and the role of the government in regard to the economy from the beginning of the twentieth century to America's entry into World War II. The authors discuss the boom of the 1920s, the crash of 1929, the ensuing Depression, and the country's response. Franklin D. Roosevelt's "hundred days" and programs such as the Works Progress Administration (WPA) are examined in detail.

Covering American history from the founding of Jamestown through present day, these volumes in the Drama of American History series explore far beyond the dates and events of a historical chronicle to present a moving illumination of the ideas, opinions, attitudes, and tribulations that led to the birth of this great nation.

What listeners say about Progressivism, the Great Depression, and the New Deal