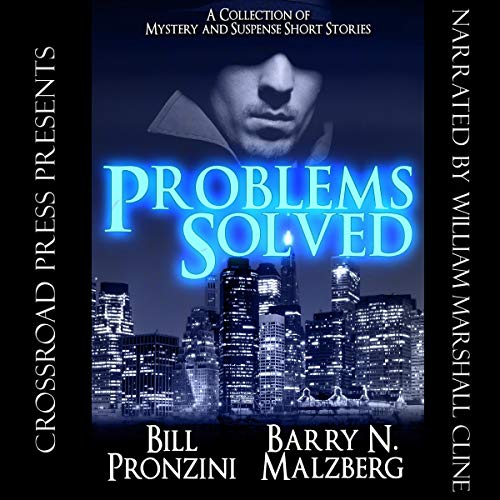 Today, Bill Pronzini is famed for his private-eye stories about the Nameless Detective and for his Shamus-award winning short stories, and Barry N. Malzberg is one of America's premier science fiction writers, but back in their salad days they collaborated on a number of stories, which have now become legendary.

Many fans have heard of them, but very few have had the privilege of listening to them - until now.

Problems Solved collects all their crime and mystery collaborations, mostly written during the 1970's and early 1980's, and a few recent collaborations (including two new stories written especially for this volume).

The stories range from suspense ("Night Rider") to irony ("What Kind of Person Are You?") to twists-in-the-tale ("Problems Solved") to science-fictional detection, including three stories about an unnamed Luna Immigration Inspector. Others emphasize sports ("What's a Chicago Cub?" asks an entrepreneur of the future), and one, "Another Burnt-Out Case," is, in Bill Pronzini's words, "a weird comic Hitchcockian crime fantasy with a carnival setting, whose last two lines elicit gleeful chortles from both of us to this day."

The cover design, illustrating both "Another Burnt-Out Case" and "Night Rider," is by Juha Lindroos, a Finnish artist working in the United States.

What listeners say about Problems Solved

Collection of when they were writing together during the 70’s and 80’s. A good selection to listen to, if one had read them back then. The narration was good. Given audio for my review

A collection of short stories that I listened to at the start of the month and despite enjoying them, three weeks on I can remember Jack-shi* about them. Well I think I enjoyed them. I don't recall wanting to pour bleach in my ears at least, so we'll go with enjoyed.

Preface: Long Time Passing
I Ought to Kill You
A Matter of Life and Death
Multiples
A Matter of Survival
Problems Solved
What Kind of Person are You?
Night Rider
The Last Plagiarism
On Account of Darkenss
Birds of a Feather
Another Burnt-Out Case
Rebound
Clocks
Million-to-One Shot
Final Exam
The Lyran Case
Whither Thou, Ghost
Vanishing Point
Demolition Inc.
The Man Who Loved Mystery Stories
Me and Mitch
Afterthought
Afterword: Crossing the Border

There were a couple featuring a space immigration agent which I liked. There was another about a basketball player who played the game of his life then disappeared, before a journalist tracks him down many years later. I think I've crossed paths with this one before but it was fun hearing it a second time.

And, and .... that's about it for the old memory banks. Insofar as I started blogging to serve as an aide memoire for me when I wanted to look back and remember my reading and what I enjoyed or disliked about certain books, I think I've failed this time around.

One thing I do know is that I prefer Pronzini's longer Nameless books to his short stories.

3 from 5 for the story collection. 1 from 5 and pelters for the review.