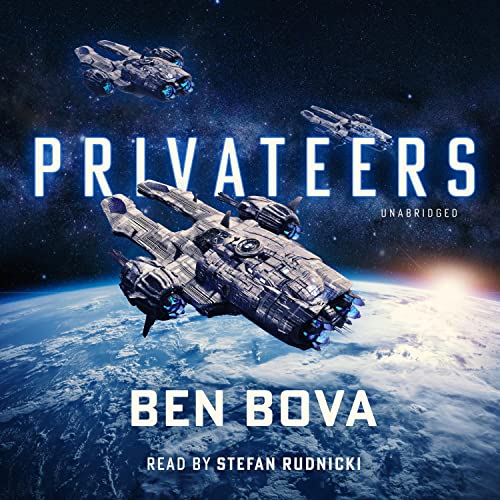 America has ceded the heavens to the tyrants - and the renegades.

The US has abandoned its quest for the stars, and an old enemy has moved in to fill the void. The potential wealth of the universe is now in malevolent hands. Rebel billionaire Dan Randolph - possessor of the largest privately owned company in space - intends to weaken the stranglehold the new despotic masters of the solar system have on the lucrative ore industry. But when the mineral-rich asteroid he sets in orbit around the Earth is commandeered by the enemy, and his unarmed workers are slaughtered in cold blood, the course of Randolph’s life is changed forever. Now cataclysm is aimed at the exposed heart of America - a potential catastrophe that Randolph himself inadvertently set in motion. And the maverick entrepreneur must use his skills, cunning, and vast resources to strike out at his foes hard, fast, and with ruthless precision - and wear proudly the mantle that fate thrust upon him: space pirate!

What listeners say about Privateers

The Madam President in this volume, and even more so in the next book, is so naïve of about how people think and their possible motivations that it would seem very unlikely that she, or anyone else, would have had the wherewithal to become President (albeit becoming at her husband’s death). Thus, this part of the plot line appears to be very weak. However, now that we have Joe Biden is as our real president, I can see how realistic this scenario actually was.