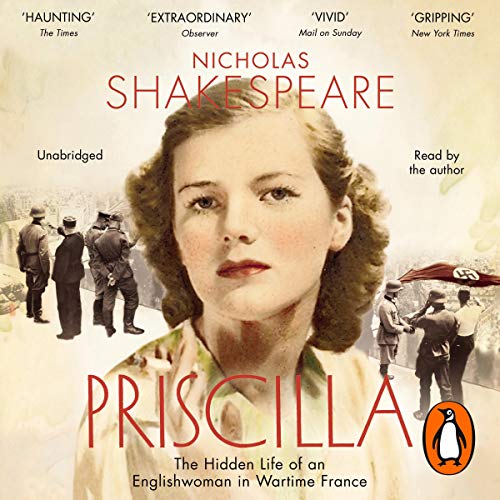 The astonishing true story of a young woman's adventures, and misadventures, in the dangerous world of Nazi-occupied France.

'A most strange and compelling book driven by the writer's unsparing search for truth: now an optimistic hunt for a family heroine, now a study in female wiles of survival, now a portrait of one very ordinary person's frailty in the face of terrible odds.' (John le Carré)

When Nicholas Shakespeare stumbled across a box of documents belonging to his late aunt he was completely unaware of where this discovery would take him. The Priscilla he remembered was very different from the glamorous, morally ambiguous young woman who emerged from the many love letters and journals, surrounded by suitors and living the dangerous existence of a British woman in a country controlled by the enemy. He had heard rumours that Priscilla had fought in the Resistance, but the truth turned out to be far more complicated. As he investigated his aunt's life, dark secrets emerged. Nicholas discovered the answer to the questions he'd been puzzling over: What caused the breakdown of Priscilla's marriage to a French aristocrat? Why had she been interned in a prisoner-of-war camp and how had she escaped? And who was the 'Otto' she was having a relationship with as Paris was liberated? Priscilla's story shows us the precariousness of life in occupied France, when loyalties were compromised and life could change in an instant. It gives us an intimate insight into women's lives in times of conflict and asks us to consider what we might do to survive in similar circumstances.

What listeners say about Priscilla

Team Nicholas Shakespeare's gift for writing with a complex character, a mystery, and the personal interest he brings to this family tale, and you have a recipe for a winning book. The setting for most of the book is pre-war France, occupied France, and post-war France and this social history aspect is an added plus. No doubt some will judge Priscilla harshly for the choices she made, but at some points she had few options and simply surviving would have been her over-riding consideration. The book is peopled by many unlikeable and selfish (but nonetheless fascinating) characters and the glamour and superficiality of some parts contrast starkly with the despair and deprivation of the years of war and occupation. Nicholas Shakespeare reads his work well to make this a top audiobook. There are quite a few French phrases which may prove irritating to readers who don't speak French, but not enough to detract seriously from enjoyment of the book.

This is a LONG, and occasionally long-winded tale which completely transported me to the war years in a very different way from the usual books, films and documentaries I've encountered. At times the content did feel a little long, and I found I had to be in the mood to listen to it, but Nicholas Shakespeare's writing is (always) so faultlessly beautiful, and his narration so perfect (and fitting) that it almost doesn't matter what the content is!
That said it is a very evocative account of the time and of ordinary lives not often heard about, and a moving attempt to unravel the mysteries of the life of the author's aunt, who he'd known as a small boy, after she had died and was no longer able to answer those questions, not that she would have. Complex characters and a fascinating and moving story make this a book I'll never forget, just like Nicholas Shakespeare's other works.

So many names, dates hard to keep track. Not enough French was translated. Story slow, kept waiting for more. I was expecting a different kind of book. I love WW2 stories but this just didn't do it for me . Not one I would recommend. Narrated beautifully though.