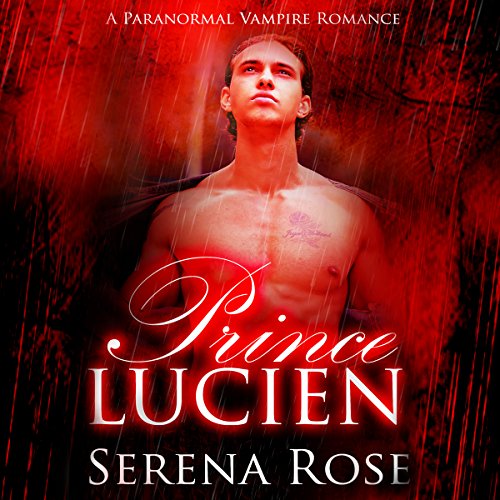 When Mara found herself captured by a gang of vampires, she feared the worst. She felt it was a random kidnapping, and so she fully expected to end up as a meal but she had no idea that she was chosen.

She was chosen by handsome Vampire Prince Lucien but Mara had no idea why.

Is it for her blood? For her fertility? Information?

Mara was about to discover the real answer was more important than she could have ever imagined.

What listeners say about Prince Lucien

Excellent can't wait for the next installment

Would you consider the audio edition of Prince Lucien to be better than the print version?

Mara because of her character and strength

What does Paul Brion bring to the story that you wouldn’t experience if you had only read the book?

Excellent voice and made it thrilling

The part about Lucien taking back his birthright was very promising. The problem i had was the heroine was only 18 and still in high school. She seemed kinda naive at times, It was like young adult theme meets adult theme. Sometimes i felt i was listening to a young adult theme trying to go to an adult theme. I really could not get into this story. I received this book for an honest opinion.

The story starts slow but it picks up. Mara is kidnapped by vampires and taken to an unknown place. She attempts to scape but encounters trouble.

This is a unique take on Vampires and supernaturals. Prince Lucien did seem kind of cold for being interested on Mara. There are some twists and turns and it concludes in a cliffhanger.

There seems to be more mystery than romance. I'm curious to see where the story goes.

The narrator did an ok job bringing the story to life.

This audiobook was given by the author, narrator, or publisher at no cost in exchange for an unbiased review via Audiobook Boom.

I found the idea of the story and the writing to be good. I just couldn't really get grabbed at the very beginning. Sometimes too much description or landing too much groundwork weighs a story down for me.
It took to long for their to be a connection....guess I like the insta or almost insta love. I liked the heroine being strong and not afraid to speak up.
Perhaps in a different frame of mind I'd. enjoy it more. Believe it is more my specific tastes and not the quality of the book or naratored that gives the a mediocre rating.
The narrator did an good job, easy to listen to...

This is a YA Book

I was given this book in exchange for an unbiased review. This book is not for adults or even young adults. I think it is for teens but the subject matter is not for teens. I did not like the book. It was long winded and the points that were made were overdone.

I was provided this audiobook through Audiobook Boom at no charge by the author, publisher and/or narrator in exchange for an unbiased review.

The narrator did a good job. The writing seemed adolescent and disjointed with too many obvious or redundant statements. It was lacking in descriptive visualization and support for believing the feelings and actions of the characters.

I have to call this out: it was repeated that his body was cold to the touch everywhere but then he had a "warm member." Giggle.

I'm not giving this a super bad score because the story was intriguing and as a first in a series, there will be time to improve and expand.

it was an ok story line. The audible narration may have killed it for me. The main character can be a bit annoying at times but all together it's a decent story

I was really looking forward to this book, it started out great then kind of stalled. I even went back and listened to the story a second time to try and figure out what was missing for me. I actually did enjoy the story more the second time through. The story had some interesting ideas, like Lucian trying to take back his birthright, it just didn’t hold my attention as much as other books have. It has an interesting story line it just needs a little work to pull it completely together. Since the background has been established for the story line it will be interesting to see where the next installment goes.

I liked the characters, but at the same time they just seemed flat at times. The connection between Lucien and Mara just didn't fit for me. Their relationship felt forced. Did like the fact that Mara never gave up and just accepted her "situation".

There are sex scenes in this story, so if you don't like sex in your books you need to skip this one.

Mara refers to herself as a girl, not a woman. Then there are sex scenes. She is 18, so technically an adult. She just didn't come across as an adult in most of the story.
Almost felt like a YA story trying to become an Adult Story but not quite succeeding.

Does end in a cliff hanger

Paul Brion does a good job with the narration. Pleasant voice. Good character voices even the female characters. Clearly spoken. Nice even pace to the narration. He was able to add emotion to the characters through his narration. His narration is what kept me listening at times. I think the story would have benefited with dual narration. Or a female narrator since the story is mainly told through Mara's POV.

I was voluntarily provided this free review copy audiobook by the author, narrator or publisher


The story line moved along rather well but it seemed as though it took away from the connection of the two main characters.

Mara and Lucien did not spend much time together for this book to be considered a romance.

There were a couple of issues that needed to be worked on with this book, for example, grammatical errors and repetitive actions.


This was a different take on Vampires which was good but the book ended on a cliff hanger.


Paul Brion did well with the narration.

this story starts out slow but it does catch momentum and develops into a good story. I am not a big fan of cliffhanger endings with that said, i can't wait for the second book to come out so I can find out what the prince and his consort is going to do next!!! I was provided this audiobook at no charge by the narrator in exchange for an unbiased review via Audiobook Boom

I did enjoy this book until the ending and it was a let down so what happened!!!!