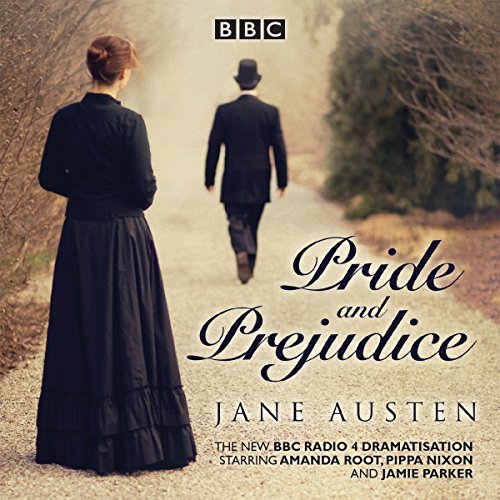 Samantha Spiro, David Troughton, and Amanda Root are among the cast of this new BBC Radio 4 dramatisation of Jane Austen’s famous novel.

Mrs Bennet is determined to see her five daughters married off and secure a future for them all.

When the wealthy Mr Bingley arrives in the neighbourhood, Mrs Bennet wastes no time in making his acquaintance. His friend Mr Darcy, however, discourages Mr Bingley from marrying Jane Bennet, and also appears to snub her sister Elizabeth.

When Elizabeth hears that Mr Darcy himself is of poor character, her innate prejudice of him is merely reinforced, and she roundly refuses his proposal of marriage. But then, when she discovers that she was misinformed, Elizabeth wonders if she can ever hope to see Mr Darcy again.…

Published over 200 years ago, Pride and Prejudice remains one of the British nation’s favourite novels. Among the starring cast in this radio production are Pippa Nixon as Elizabeth and Jamie Parker as Mr Darcy.

What listeners say about Pride and Prejudice

Enjoyed it immensely.and I will again and again.A favourite love story extremely well told. an interesting look at life and love in those days of old A pleasure to be able to listen to it while doing other things.Thank you Audible.

Delightful, but too short

This is a delightful adaptation of Pride and Prejudice with an excellent cast, apart from L. Wilson whose Jane Bennet is utterly insipid and so sugary sweet that it makes your teeth ache listening to her.

The only major drawback is that BBC was surprisingly sparing with the episodes: this version of P&P only consists of 3. As a consequence we are raced through all important events with a crash-boom-bang. There is hardly 5 minutes for the 1st marriage proposal, for Darcy's letter or Elizabeth's introspection of herself. If there were 4 episodes, there wouldn' t be such a rush to finish the story.

All in all, it is worth listening to.

Narration is great, voices are great, sound effects and background music are nice, but they changed the story. They cut out scenes and combined them together. I understand this was to make it shorter, but I still don't care for it. There's no nice build up for Darcy and Elizabeth. I wouldn't recommend this version for a first time listen to Pride and Prejudice! This is for someone familiar with the story and wanting a quick trip into Jane Austen world!

What made the experience of listening to Pride and Prejudice the most enjoyable?

If I missed something, I could go back a listen again.

What was one of the most memorable moments of Pride and Prejudice?

When Elizabeth realizes that Darcy isn't the person she thought him to be. Which is made real when her sister, Lydia, lets slip that Darcy had been at the wedding of herself and Whickham. And later when Eliza gets the truth that Darcy paid for all of Whickham's debts and forced the marriage between them. All because he loves Elizabeth.

Which character – as performed by Samantha Spiro and Full Cast – was your favorite?

I have always enjoyed the character of Elizabeth's Father. I love his feelings about his silly wife and his younger sillier daughters. However, he realizes how much more he should have monitored them, after Lydia had run off with Wickham.

When Elizabeth was made aware that Darcy had come between her sister, Jane, and Bingley. It saddened her as she knew how much Jane loved him.

I have already listened to it twice. Thanks

They did a wonderful job on this story! Five stars all the way! The voices were all excellent. Loved it! Have listened to it twice already and will again :).

Couldn't hope for a better dramatization.The background score was brilliant and other sounds made it easier to imagine the era.It was like a movie for the ears without straining the eyes.Loved the narrator who played Mrs Bennet!Elizabeth sounded a bit like Keira Knightley(which was a bonus!)and Mr Darcy and Mr Bingley were brilliant!

Always a fan of Jane Austin's books. I have read them over and over again. I enjoyed this dramatization

If you love theatre and love the story of Pride and Prejudice, then you must listen to this audio. It’s a simple dramatization of the beloved classic and performed well. You feel like you’re in the midst of your favorite characters as they laugh together and argue together. This was a joy!

I love Jane Austen stories. Pride and Prejudice is my favorite of her stories and listening to it on audio makes it even better. It was almost like watching the movie.

While this is by no means the whole length version it has all of the assets necessary for the story. I personally love multiple voice audio books. Jane Austen was a wonderful writer and it is a great refreshment after all of our modern junk. This book is helpful and calming and I highly recommend this book!😊

Beautifully done! The actors were phenomenal!
I highly recommend this edition on audible! I'd tried reading Pride and Prejudice years ago. This is the way to go! 😀

The actors performed well, the sounds were good. I've listened to this several times already.

The best novel ever!

The bestest novel ever. Oh how I love Mr.Darcy. He is the best man in the entire universe of fiction. And Miss. Elizabeth, she is the most intelligent and charming female character ever. I LOVE THIS NOVEL FROM THE BOTTOM OF MY HEART. And this narration was marvelously performed. I LOVED IT. 💖💘💟💞

can't hear it too much

A classic version of this well loved story..it is the best stress reliever. Never fails!

Proof that dramatising a novel is dangerous!

This production was basically true to the novel, unlike some adaptations but it hit the usual problem of how to fit in all the nuances of plot and character that exist in Jane Austen's novels, in the time allowed. I gave the story 3* purely for the adaptation. The book as written by Jane Austen gets 5* every time.

Pride and Prejudice is a wonderful story and was so mutilated by the script writing – as to be unrecognisable. The point of the story was lost completely and reduced to some silly love story. The readers did their best, but there was no salvaging the tale.

This is an audio you really have to listen to in one sitting as its like a book you don't want to put down. The casting is well chosen and performance excellent. Only the BBC produce the best.