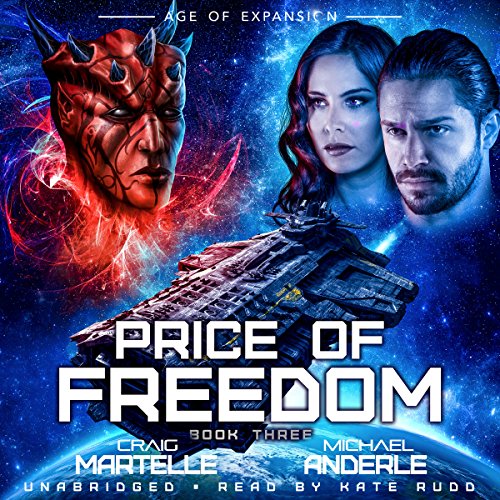 Price of Freedom: Age of Expansion - A Kurtherian Gambit Series

Space is a dangerous place, even for the wary, especially for the unprepared. The aliens have no idea. Here comes the Bad Company.

On Earth, parents told stories about the devil to frighten children. But devils exist and from time to time, they find their way here.

Terry and Char take the Bad Company’s Direct Action Branch into combat to rid a world beyond the borders of a new incursion. All it will cost is the inhabitants’ most advanced technology, a miniaturized power supply that will revolutionize the Etheric Federation.

Nathan wants it, badly enough that he’s made the mission non-negotiable. Terry’s hands are tied as he takes the team into the hot zone.

Join Terry and Char as the War Axe delivers the team to a planet well outside of Federation space where they have to convince the local aliens that the Bad Company is from the government and they’re there to help.

Join the Bad Company as they fight an enemy from their worst nightmares.

NOTE: If cursing is a problem, then this might not be for you.

What listeners say about Price of Freedom: Age of Expansion - A Kurtherian Gambit Series

There were a handful of facepalm moments but overall a good story. Sadly there's an issue where a portion of Craig's author notes seems to skip a section.

the story isn't to bad but its annoying that the technology in this story is so far off of the main Bethany Ann series. the author makes a big deal about the power of the battle suits. but back on earth Marcus was able to build a tiny etheric generator. so I don't understand why the tech for the ethiric federation is so poor. its like all the good tech only exist in the original series. other then the tech that I find annoying. this story was pretty good.

Wonderful series, love all the people in it. Terry, TH and Char and the Bad Company need a break, something to go right for a change. Ted needs a sock in the mouth. Yes he is a genious, but no more or less important than anyone else from the lowest crew man, grunt, or anyone else. As I said great series, I look forward to more. p.s. Killing Rameses, sp. made me cry. I know they can not all live forever. But still. Keep up the great story telling. Thanks, Bren

I've was hooked on The Kurtherian world since the beginning. This is another great addition to my collection. I love the change to TH's character, this series has always had humorous moments in between the struggles, and TH has joined those. Great move.
I'm not one to get teary eyed easily, but you brought me there at the end. My goodness, you did some good writing there.
Looking forward to next release.