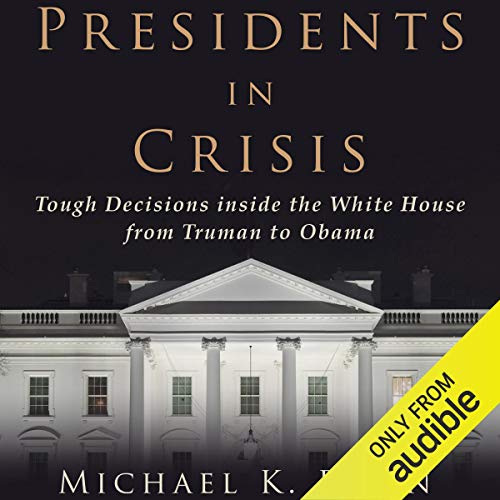 Every American president, when faced with a crisis, longs to take bold and decisive action. When American lives or vital interests are at stake, the public - and especially the news media and political opponents - expect aggressive leadership. But, contrary to the dramatizations of Hollywood, rarely does a president have that option.

In Presidents in Crisis, a former director of the Situation Room takes the listener inside the White House during 17 grave international emergencies handled by the presidents from Truman to Obama: from North Korea's invasion of South Korea to the revolutions of the Arab Spring, and from the 13 days of the Cuban Missile Crisis to the taking of American diplomats hostage in Iran and George W. Bush's response to the attacks of September 11, 2001. In narratives that convey the drama of unfolding events and the stakes of confrontation when a misstep can mean catastrophe, he walks us step-by-step through each crisis. Laying out the key players and personalities and the moral and political calculations that the leaders have had to make, he provides a fascinating insider's look at modern presidential decision making and the fundamental role in it of human frailty.

Skyhorse Publishing, as well as our Arcade imprint, are proud to publish a broad range of books for those interested in history - books about World War II, the Third Reich, Hitler and his henchmen, the JFK assassination, conspiracies, the American Civil War, the American Revolution, gladiators, Vikings, ancient Rome, medieval times, the old West, and much more. While not every title we publish becomes a New York Times best seller or a national best seller, we are committed to books on subjects that are sometimes overlooked and to authors whose work might not otherwise find a home.

What listeners say about Presidents in Crisis

The author was the director of the White House Situation Room under President Reagan. In this book he describes seventeen challenges faced by presidents. Bohn states “circumstances beyond their control more often than not constrained their actions, resulting in temporary fixes rather than long term successes”. Bohn shows how the modern presidents are caught up in rivalries between civilian and military or in what is called “groupthink” which prevents a thorough analysis of each crisis.

Bohn provides a description of the crisis followed by a brief assessment of the consequences of the presidential action. I noticed an interesting theme began to reveal itself throughout the book: the importance of “muddling through” and the avoidance of a long term solution to the problem. Bohn discusses some events that I was most interested in such as the Cuban Missile Crisis with President Kennedy, the 1973 Yom Kipper War with Nixon and Kissinger, and the U2 spy plane with Eisenhower. Bohn provided more detail with the 1978-1981 Iranian Hostage Crisis with President Jimmy Carter. There were more events but I will not list them.

The book is well written and meticulously researched. It is a good study on how to or not to handle a crisis. Bohn does provide background history to the events which helps put them into context. I noted the author had more problems staying the neutral reporter with the more current events than he did with the events with more historical perception to draw on. Overall, it is an interesting study of crisis and presidents’ management styles.

Kevin Stillwell does a good job narrating the book. Stillwell is an actor and experienced audiobook narrator.

A journey through history and American politics.

A great overview in to what led to decisions at the Whitehouse and how they shaped the future.

A view from the inside.

Absorbing insight into the minds of the Presidents during times of crisis. Well narated.