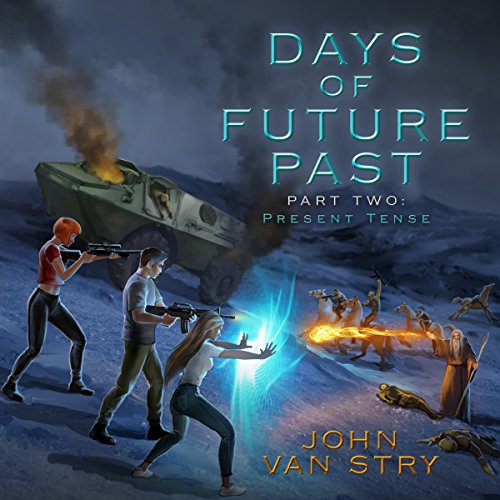 Coyote has a new task for Paul, one that involves him traveling north hundreds of miles over the post-apocalyptic landscape of California, the place that Paul once called home.

Thankfully, Sarah and Heather have both decided to go with him and between Heather's shooting skills and Sarah's magical ones; Paul thinks he might just live through whatever scheme Coyote has enlisted him in. If he can live through telling the girls just what Coyote's got him carrying in his pack now, of course.

At least he's done with Riggs and hopefully won't have to deal with him ever again, nothing could be worse than that after all!

What listeners say about Present Tense

Listen to book one first!

Book two starts right where book one ends. If you don't listen to book one first, you won't know who Sarah and Heather are, what coyote is or why Riggs says/does what Riggs says/does. There is no explanation whatsoever in this listen so go back to book one or you will be lost. You've been warned.

With that, if you've listened to book one then you will surely enjoy book two. I most certainly did!!!

This listen was fun and exciting and mirthful and snarky. It had romance and dwarfs and dragons and genies and oh yeah, nuclear missiles. The narrator was the same from book one and I love him so much. He can certainly turn a phrase.

Book two ends with a nod towards book three and I can't wait!

I love this story and the world you have created. can wait to see what else you do with it

It looks like our back up plan is going to have an interesting time in the next book in this series. So happy with the book and narration on this book!

Fun read with an excellent juxtaposition between magic, technology and human ( mostly), interactions.

I loved it. looking forward to the next book. john van stry is becoming one of my favarite.