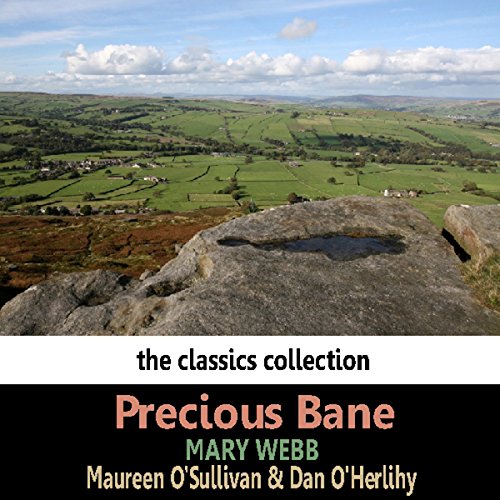 Set in rural Shropshire shortly after the Napoleonic Wars, Precious Bane is narrated by the central character, Prue Sarn, whose life is blighted by having a harelip. Only the weaver, Kester Woodseaves, perceives the beauty of her character, but Prue cannot believe herself worthy of him. Her brother, Gideon, is overridingly ambitious to attain wealth and power, regardless of who suffers while he does so.

Gideon is set to wed his sweetheart, Jancis, but he incurs the wrath of her father, the cruel and scheming self-proclaimed wizard Beguildy. An act of vengeance by Beguildy makes Gideon reject Jancis and tragedy overwhelms them both. Prue is wrongly accused of murder and set upon by a mob, but Kester defies them and carries Prue away to the happiness she believed she could never possess because of her harelip.

What listeners say about Precious Bane

What would have made Precious Bane better?

This is a weird combination of spoken play and synopsis - not a recording of the entire novel. HUGE gaps in the narrative and badly portrayed characters marred what could have been a lovely listening experience.

Would you ever listen to anything by Mary Webb again?

Who would you have cast as narrator instead of Maureen O'Sullivan and Dan O'Herlihy ?

there was no narrator. it was a bunch of actors speaking parts

the book itself is FANTASTIC - the recording was not

Precious Bain is a beautiful story. This abridgment takes out all of the descriptive language of the author plus the details that give it life. Descriptions of countryside, the building of relationships,depth of the characters both good and bad,
It is more a dramatization, or the soundtrack of a short bad movie then a book. I wish I had been warned before I made this purchase.

Is it possible to give zero stars? I would if I could. This recording appears to be a digital copy of a vinyl* original of an aged radio play. (* There's a scratch in soundtrack during the first 10 minutes or so.) The abridgement is terrible and manages to lose -all- the charm and poetry of the book. The dialogue is garbled, the acting is flat. If you liked the book or the 1989 BBC production enough to search out an audio version of Precious Bane, you won't like this.

Once I realized the format was a performance, I relaxed into the accents and familiar words and enjoyed it. Maureen O'Sullivan!

It is a shame this is an abridged version of this novel but all the readers did a great job with their performances.

what was that about?

I read this a few years ago. This was unrecognizable. The accents were indecipherable. There was too much waste of time in music. And the story didn't make sense . If you haven't read the book you wouldn't get it.

loved it , slightly difficult to read in places.

Loved it, slightly difficult to read in places but enjoyed the story & the dialogue.

What on earth have I just listened to?

1940s soundtrack music, cheesy songs and a cast of characters who have never been anywhere near Shropshire.

Book? Sounded more like an audio track of a film

Very disappointed with this title. Really disliked the dramatic performances. I was expecting a narration. I would have given zero stars for the above 3 categories but was unable to do so.

I thought I was going to hear a reading of the book - not a dramatised version. A wonderful classic spoiled by a poor very much reduced version. waste of money.