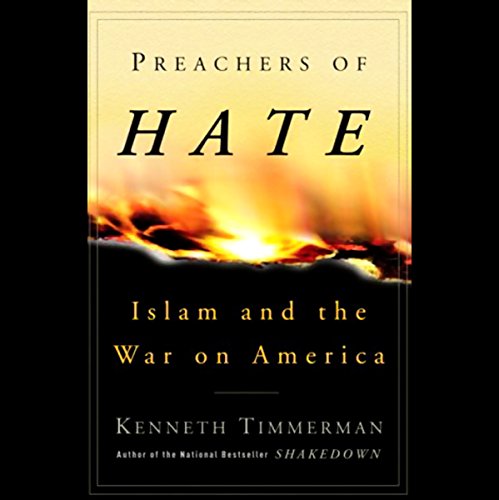 Islam and the War on America
By: Kenneth Timmerman
Narrated by: Robertson Dean
Length: 13 hrs and 26 mins
Categories: History, Political
5 out of 5 stars 5.0 (1 rating)

Like no book before it, Preachers of Hate uncovers an ancient hatred that threatens the life and livelihood of every American.

The “new” anti-Semitism targets not only Jews, but Americans specifically and the West in general. It targets our values, our lifestyle, and our freedoms. It is the single most important issue we face when trying to make sense of the Arab world.

Most Americans will be stunned to discover the depth and extent of anti-Semitic hatred in today’s Middle East and Europe, and that many Muslim leaders are not just encouraging it, but spending a great deal of money to spread the lies that spawned the terrorists responsible for the September 11 attack on America. In Preachers of Hate, best-selling author Kenneth R. Timmerman (who is not Jewish) contends that, besides Islam itself, the core unifying force in the Muslim world is a virulent strain of anti-Semitism that postulates the existence of a Jewish conspiracy to take over the world.

From the pulpits of fiery Muslim clerics to the Arab street, and to the highest reaches of government and state-sponsored media, there is a belief that this thousand-year-old conspiracy has already taken hold in America and is now, especially after the war in Iraq, about to do the same in the Middle East and beyond. It is seen as no less than Muslims’ historical destiny to prevent such a takeover, and to do so by any means possible. To misunderstand the ferocity of that belief is to vastly underestimate the resolve of many Muslims to repel America, Israel, and all things Western.

Timmerman explores the roots of this hatred, examining its history, the religious sources upon which it draws, and how it is being transmitted to young people growing up in Arab societies by their leaders, their teachers, and their mosques. He documents how U.S. and European Union money has been used to finance hatred in Palestinian schools. He exposes the double-talk of Arab leaders and their supporters in the West. As it so often was throughout history, this new strain of Jew hatred is really about much more than Jews. They get attacked first, when the enemies of America can’t attack Americans. However, what begins with the Jews never ends with the Jews.

“Is there a conspiracy between America and the Jews?” asks Timmerman. “Indeed there is: A common heritage, a dedication to improving the human condition through compassion and tolerance of differences - a conspiracy of freedom. And that is why they hate us.” As with the Jews throughout history, America has been “unfairly successful.” As have the Jews, Americans have “profited” from the misery and poverty of others. If you hate Jews, you must also hate America.

Such is the simple logic of the anti-Semite. Such, increasingly, is the logic of the Middle East. It is a message that is reinforced day in and day out by the official government-sanctioned Arab media, from the streets of Egypt, London, Lebanon, Saudi Arabia, Paris, and Gaza, and in the mosques where impassioned clerics quote verbatim texts like the Protocols of the Elders of Zion, a pillar of anti-Semitic hatred that originated in czarist Russia.

As America reasserts her role in the Middle East and attempts to bring peace between Jews and Arabs, Preachers of Hate is an essential book that reframes a very complicated issue as a matter of life and death.

What listeners say about Preachers of Hate

Don't Say They Didn't Warn You

After reading, and listening to, several books on Islam, this book, like some of the others, takes an unpopular view of Islam and its creation. The scary thing is that a great deal of the arguments ring true. They all agree that a large body of Muslims support the militant view that we often attribute only to terrorists. Islam as the one and only true religion is a central theme and how that is interpreted is discussed in detail. Very informative, requiring scrutiny and analysis.

We need to know about this...

I read this book BEFORE I seen Michael Moore's Farenheit 9/11, looks as if he did prior to making the film. This book makes an important contribution to western audiences ability to understand islam in the modern world, and the role of the House of Saud in spreading international terror. Some reviewers mistakenly feel that it is a polemic against islam; it is not, but it is an accurate description of a toxic vein that runs through the religion. I am very glad I don't have to live with the same level of threat that the Israelis do. After the cold war, elements within Islam seem to have put themselves on a collison course with other world views. We need to know about this.

Once again Ken Timmerman shows us his proficient knowledge of the workings of the Middle East. This book forces one to crave the author's current writings snd opinion.

This book is a great resource about the increase in anti-semitism in todays society. Though it becomes a bit repetitive towards the end, it is none the less filled with quotes and references from both sides of the "semitic" fence, and is a must read for anyone that is interested in coming to grips with the origin of this irrational hatred.

This is an EXCELLENT.... EYE OPENING read!

The writer is a respected journalist who KNOWS his stuff!
Believe me ,the bad reviews are politically motivated......
narration GREAT....Sound GREAT....it WILL keep your interest, and be an eye opening revelation to what is going on in Europe,Islam, and Our universities.WELL RESEARCHED!

This is a must read for everyone. Brings home the reality of what is happening in today's world, and the irrational reasoning why.

This is true Islam - be warned!!

This book is very well written and very revealing. I found the author Kenneth Timmerman extremely profound on his observations and his reasonings. This is a must read book !!

Islam is NOT the loving, peaceful, and kind religion it is shown to be in the news or by heads of states. If these americanism muslins were to try and do this "new" Islam in their native country, they would be tortured and killed PERIOD!!

Look to Canada and the 27 muslins terrorist arrested, who wanted to take over the government and behead our Prime Minster. Look over in Great Briton and the bombings and the foiled aircraft bombings. It is in plain sight, but ......

The koran tells of the desire of world dominiance of Islam, convert to Islam or die!! The truth is always painful, to hid ones head in the sand is cowardism of the highest form. The reporters that were just released were made to "convert" to Islam before they were released. Read their accounts they thought they were going to die!!

Research Islam yourself as Mr. Kenneth Timmerman has done in this book. We do live in very terrible times and it will only get worse and worse.

Do not believe me; look at Iran, look at the leaders statements, compare it to our leaders stating that all we have to do is talk, just like Neville Chambelin did in the Second World War after his talk with Herr Hitler in Germany; Neville Chambelin returned to England and stated to the world holding a piece of paper with Hitler's signature on it, "we will have peace in our time". Hitler invaded Poland September 1, 1939 and began World War II!!!

This is what awaits us if we fall prey to the lies of Islam. Do not believe me go and live in their country, read the koran and what it says about us; we are dogs, infidies, satan, and many other "loving names" read what Islam will do to you if you do not convert ..... you die through beheading.

What this book has to say is so frightening, that literally, my breath was taken away as I listened. The book is so involving I lost track of time, only to find myself stopping because I was unable to go on.

As this book describes, the rapidly growing worldwide depth of hatred for Jews and the United States is so ingrained, and so profound, and evidence of this hatred is so clearly bolstered by mountains of facts, that one comes away after listening with a different feeling of how incredibly unsafe the world is, not only for Jews, but for anyone who might fall into the 'infidel' classifcation.

The Protocals of Islam

This was a great book! I am recommending it to all my friends. It is time that the real problems of the Middle East were exposed for what they are, a plot by the Saudi backed religous zealots that want to see all Westerns dead or under their control. Time to stop blaming the Jews and Israel for the crimes against mankind sponsered by Saudi blood money.

Timmerman does an excellent job of laying out the roots of Anti-Semitism in the Arab world, as well as its spread to other countries. This is a disturbing but important lesson. It's important to go deeper than sound bites doled out by the media when forming opinions, and Timmerman is an excellent resource. A bit dry at times, but excellent never-the-less.