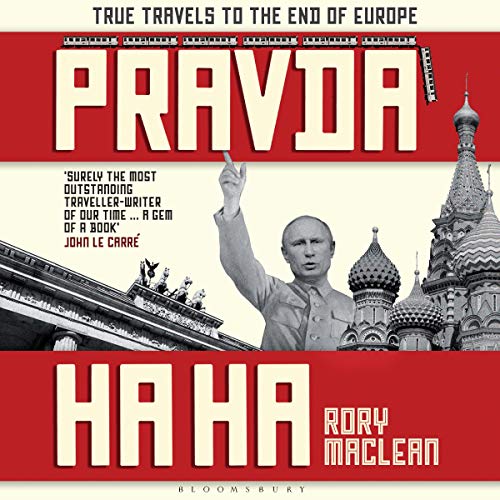 True Travels to the End of Europe
By: Rory MacLean
Narrated by: Rory MacLean
Length: 12 hrs and 35 mins
Categories: Travel & Tourism
4.0 out of 5 stars 4.0 (2 ratings)

"A gem of a book, informative, companionable, sometimes funny, and wholly original. MacLean must surely be the outstanding, and most indefatigable, traveller writer of our time." (John le Carré)

In 1989 the Berlin Wall fell. In that euphoric year Rory MacLean travelled from Berlin to Moscow, exploring lands that were - for most Brits and Americans - part of the forgotten half of Europe.

Thirty years on, MacLean traces his original journey backwards, across countries confronting old ghosts and new fears: from revanchist Russia, through Ukraine’s bloodlands, into illiberal Hungary and then Poland, Germany and the UK. Along the way he shoulders an AK-47 to go hunting with Moscow's chicken tsar, plays video games in St Petersburg with a cyber-hacker who cracked the US election, drops by the Che Guevara High School of Political Leadership in a nonexistent nowhereland and meets the Warsaw doctor who tried to stop a march of 70,000 nationalists. Finally, on the shores of Lake Geneva, he waits patiently to chat with Mikhail Gorbachev.

As Europe sleepwalks into a perilous new age, MacLean explores how opportunists - both within and outside of Russia, from Putin to Home Counties populists - have made a joke of truth, exploiting refugees and the dispossessed, and examines the veracity of historical narrative from reportage to fiction and fake news. He asks what happened to the optimism of 1989 and, in the shadow of Brexit, chronicles the collapse of the European dream.

"This is a tremendous thing that MacLean is creating; a new kind of history, in several dimensions and innumerable moods, that adds up to – across the span of his books – a great and continuing work of literature." (Jan Morris)

"No one writes quite like Rory MacLean." (Robert Macfarlane)

The Opposite of good travel-writing

I recall enjoying the same author's "Stalin's Nose", when I was a teenager. I have grown up since 1995; it is a shame that this petulant, self-satisfied writer has not. A good travel book shows an author learning from his experience: this book, however, starts with insufferable moral and political lecturing , and imposes this trite hectoring on the reader throughout the book. Neither the author nor the reader learns anything.