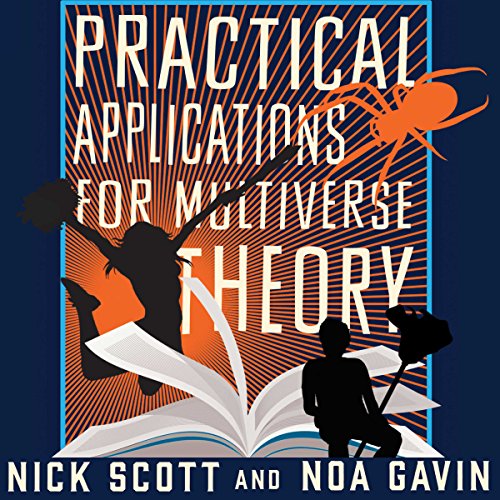 Carson High School seniors Scott and Davey don't have much common ground - that is, until all universes begin collapsing into their school. Soon the avowed loner and the mean-girl cheerleader realize that something is very wrong, and they're the only two who are aware of what's happening. Demon versions of their teachers roam the halls, a cowboy sloth appears sporadically, and some students randomly burst into flames while angry interdimensional counterparts of other students destroy everything in sight.

Now it's up to two seniors from opposite sides of the social spectrum to defeat this scourge and save not only their high school but also the world. Armed with little more than school supplies and Scott's trusty copy of The NEW Multiverse Theory, can these unlikely heroes put their differences aside and stop the total chaos? If they can't, the end of the world may just be beginning.

What listeners say about Practical Applications for Multiverse Theory

I have to take a page out of a friend's book and rate this book as 5 stars just because I can easily recommend it to literally anyone. It is just that entertaining of a book.

This book bucks all the cliches we've grown used to. So much so, that I honestly can't tell if it is supposed to be an adult book or a YA book. I guess that means it is actually a book for all ages that all ages can, and will enjoy.

Our two plucky heroes feature your typical bleach blonde cheerleader and your typical high school nerd. That's where the typical stops, while the starting point may be cookie cutter, the evolution and character growth of Davey and Scott is second to none. And can I just say how absolutely pleased I am that there is no love subplot between the two? In fact, they hate each other.

As this is the third book I've finished this year that is about multiple dimensions, I can only assume it is the current fad. With that in mind, this one is so far the best of the three. It is entertaining with its real feeling characters. Characters that don't break your sense of disbelief or anything.

Additionally, there are a great many references in the book that cover anything from World of Warcraft to the Kardashians. Frankly, I doubt I even caught half of them. Now the alternate realties are all on the silly side, but that just shows you that the book doesn't take itself too seriously.

What it boils down to is that you have two main characters that could easily be the reader in a quite realistic manner. Then these characters that you can relate to are put into completely absurd situations, but have to use real world logic to get out of them. No shenanigans, no magic powers, just ingenuity or running like a coward.

You will laugh at all the jokes, but if you stop to think about it, you will get so much more from this book. I recommend it to any and everyone.

Fun for all ages!

I read this book because I had seen the authors perform improv and thought they were had great timing and wit. However, my 17 year old started reading it as well and it made fir great discussions at home. It was a lot of fun to read and even more fun to share!

Found it very entertaining. Good material to be a 2 or 3 part animated movie. Or a live action/animation.

balls to the walls

crazy strange balls to the walls fun, if you enjoy all of thouse things in a book then you'll love this only thing that isn't good is the ending

Gave up, just a mess

Gave up after 6 hours. Just scene after scene and no progress towards figuring out what was causing the events, no character development and main characters still weren’t working together.
Life is too short to waste my time on such a sloppy, juvenile attempt.

I’ve been 38 years separated from high school, yet this brought it all back for me. And having it presented in the context of SF is a bonus. Hope there’s a sequel in the future.