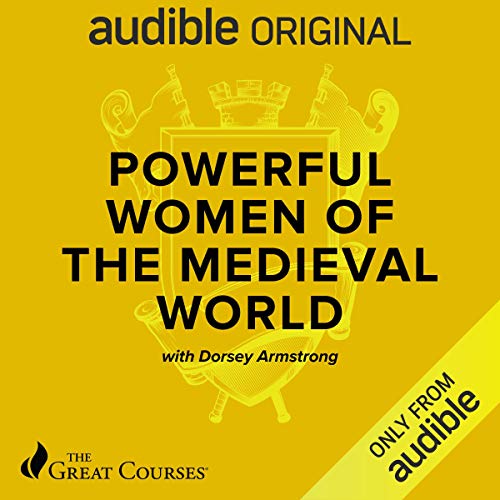 Powerful Women of the Medieval World

Throughout history, women have played integral roles in family, society, religion, government, war - in short, in all aspects of human civilization. Their contributions have often shaped history and shifted the axis of power for later generations of women. And yet, unearthing their stories from the historical record has often been a challenge, with the ordinary difficulties of preserving information across the generations increased by centuries of historical bias and gender expectations.

In Powerful Women of the Medieval World, Professor Dorsey Armstrong will introduce you to 10 amazing women who played vital roles in the Middle Ages, whether they wielded power from an imperial throne like Empress Theodora, led armies like Joan of Arc, or altered the course of Christian theology like Hildegard of Bingen. All of these women were from different times and places, yet they share the honor of having impacted the world in crucial ways. Their impact on history and society also shines a light on the conditions of ordinary women, those who did not have the chance to build such phenomenal legacies, but who nevertheless played vital roles in the family, the community, and the world at large.

While many of these women achieved power thanks to singular opportunities and unusual crises, they also share an indefinable quality that propelled them to seize the unpredictable chances they were given. As you examine the stories of these remarkable women, you will get a unique opportunity to unearth invaluable context and see history from a new perspective, one that can provide a richer understanding of the past and how it has shaped the world we live in today.

What listeners say about Powerful Women of the Medieval World

Very good! I wish I would have began listening to the Great Courses sooner.

I enjoyed the style of the lectures, and the progression through the early, middle, to late period hlped me to get a sense of how the women that were discussed had an influence on history. I always wanted to take more history and litterature courses when I went to University but never had the chance. It’s wonderful to have thiss opportunity to learn now that I’m retired.

Brainwashed & brutally inaccurate. Kiev is the capital of Ukraine. Russia didn't exist for centuries after the events of her story. The territory and tradition of Kievan Rus is today's Ukraine. Yet the author names Kiev - Russia, and the local Slavic tribes - Finnish. And the only one Slavic tribe, the antagonists, she calls Ukrainians. Russians are Finnish but they were located half-a-continent away and not yet a political unit or a kingdom. It's brutally inaccurate, and sounds like a disgusting political attack from Kremlin. Yuck!

Professor Armstrong does a masterful job bringing to life 10 powerful woman I never knew about in medieval history. I learned a lot about the history of this 1000 year period in the process. I thoroughly enjoyed this book.

I love medieval history and the way Dorsey Armstrong tells it is easy to understand for those of us who are not academics in the area. She is entertaining and her passion for the subject is obvious. I will be listening to more of her lectures.

This was very educational and interesting. I wish it could have gone on with more females throughout history.

Wish she was my prof!

absolutely loved this. I had watched to the great courses on the roku channel was so happy to find a way to take them with me. Dorsey Armstrong is fantasic!

Excellent info on SMART WOMEN! Without women there would be no men in the world.

most of these when I have heard of and it was fascinating. I really appreciate the explanation of history at the time so I could finally realize their impact. I also was so surprised about Joan of arc. I had no idea all the things she believe and accomplished.

The author has a good knack for telling the story of people who lived hundreds of years ago with a voice of today. Yet, this does not take away from the story at all. It really makes it easier to understand and relate to.