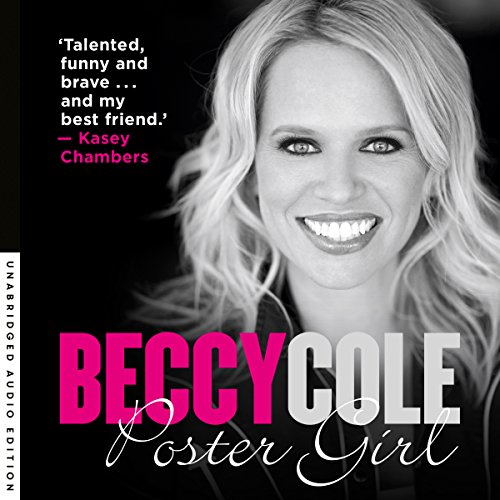 Heartfelt and honest, Poster Girl is the inspirational memoir of a strong woman who epitomises the authentic spirit of country music and of Australia.

"The truth is, all I've ever wanted is to be onstage and present my songs and stories.... If they come to see me, I'm giving them something to see." (Beccy Cole)

Known for her hugely entertaining live shows and songs that are beloved by people of all ages, Beccy Cole has won nine Golden Guitars and seven songwriting awards, amongst other accolades. Her work has taken her around Australia, to small country towns, the Top End, and the Tamworth Country Music Festival, and to Iraq, where she performed for Australian troops.

Behind this amazing success is the shy girl with a dream; the artist who has forged a creative life and worked incredibly hard to do it; the mother whose son is at the centre of her world; the fiercely loyal friend; the devoted daughter and granddaughter. There's also the woman who has looked for love, who's had her heart broken and now finds it filled with joy.

In this unabridged audio edition, Beccy Cole tells her own story in that warm, distinctive voice we know and love.

"Talented, funny and brave ... and my best friend." (Kasey Chambers)

What listeners say about Poster Girl

Thank you Beccy. A great and engaging story that is told wonderfully by the great voice behind the great music

A brilliant book.
Beautifully read by Beccy
Open, honest and raw.
A window into Beccy's heart, soul and music.

Would you consider the audio edition of Poster Girl to be better than the print version?

Beccy's openness in telling her story. She was brave, honest and heartfelt.

As she was reading her own life story, it felt like she was just there with you, having a chat.

Yes! I can't say how many times I shook my head and said "Oh, Beccy!" She made me laugh quite a number of times and I did tear up a couple of times too.

Loved loved loved it. I am do glad Becci did her own narration. She is funny entertaining and very articulate and best of all, she is herself - I hope she sees this review. The only problem is i am having trouble finding something to listen to that I will equally joy. What an inspiration she is. I have been to several of her concerts and now feel like I know her personally and gained a new friend.

wow what an emotional journey i have just been on whilst reading this book, i can honestly say thank you. Thank you for being so honest about everything, thankyou for staying true to yourself. and lastly thankyou for the courage that i have learnt from you, courge to come out to friends and some family and also courage to accept myself flaws and all. xx

This is without a doubt one of the best biographies I’ve ever read. It made me laugh and hit me in the feels quite a few times.

My personal favourite quote is; “Rougher
Than a bag of spanners”

Thank you Beccy. You’re a gem and have made it easier for regional queer people like me.

As a lesbian who took 40 years to come out. Beccy’s story hit many chords. The woman you see on stage is the same woman who shares the ups & downs on being Beccy Cole

This book is a very real and enjoyable story of the struggles and successes and the drama of life trying to find a way through the emotions and fears of a deeply feeling and also ambitious talented lady.
From knock backs in work and drama in love to success and true happiness it’s a wonderful read.

Loved the book and having it read by Beccy herself was awesome. I found her life story very interesting.

laugh, cry and be humbled. love this lady. a genuine aussie girl made good. all with a kind heart. fantastic.