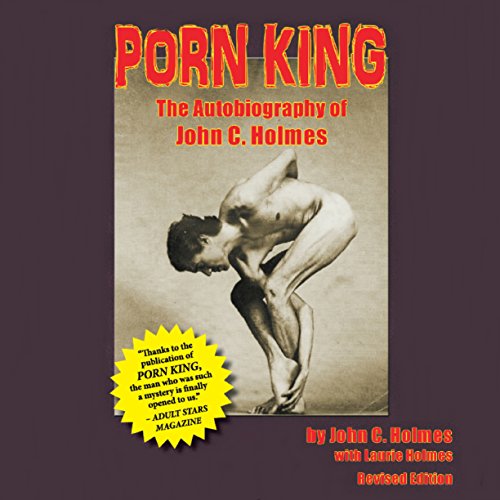 Autobiography of the King of Porn In the world of adult cinema, one name stands out above all others: John Holmes. For nearly 20 years, from 1967 to 1987, Holmes reigned as the undisputed king of X-rated films, having appeared in a record 2,200 plus productions, from the landmark Johnny Wadd movies (one of which became the first adult motion picture to gross over $1 million) to the legendary Insatiable with Marilyn Chambers. To a legion of fans world-wide, he was known as "Mr. Big." To industry insiders, he was "Mr. Nice Guy." Yet for all of his fame and notoriety, Holmes remained an intensely private person and a mystery man. - that is, until now.

In a startlingly frank autobiography, Porn King was written in large part prior to his death (with new material added by his widow, Laurie). Holmes tells the story of his incredible life. This is not a typical celebrity story, filled with bright lights and glamour, giant sound stages and movie moguls. It is, instead, a rare portrait of a young man drawn into an unknown Hollywood, a secret, forbidden Hollywood, and the parallels between his astounding career and the sexual revolution in American films. Holmes knew his subject better than anyone. Holmes candidly tells of a lucrative but often harrowing "other" life as a male prostitute to the rich and famous, a shattering fall into drugs and his side of the grisly Wonderland Murders and his desperate cross-country right afterwards.

On the surface this looked interesting. In reality, not so. I got through it but I struggled throughout.

I mean, it's an interesting story, but you could probably pick it up by reading a Wikipedia article.

nothing i didnt already know.

this must have been written by someone who didnt bother doing research. only read papers and other peoples articles about Holmes. no new insights!

worth the credit. I didn't know much about John Holmes but I figured he had an interesting life and I guess that would be a understatement!

the book really was.not at.all captivating ...given that this man defined.and.shaped.open in his era . if you didn't.know.who he.was....this story could.be about anyone and.would.be.equally as interesting

It was a very interesting look into the life of an adult movie star. Filled with drugs, sex and lots of violence and drama, this book takes you through the highs (no pun intended) and lows of a well-known adult film star.

Hugely disappointed. I thought the life of John C. Holmes would have been at least mildly interesting...it wasn't. I even held out until the 4th hour of the story until I just couldn't listen anymore and the book was only 5 hours long. I've listened too many books on Audible and this one I would have to rank at dead last. Don't bother with this drivel.

A good read.The man had some life&some coke habit.I enjoyed it.There's so many films&books about his life but I feel I read the truest account here.