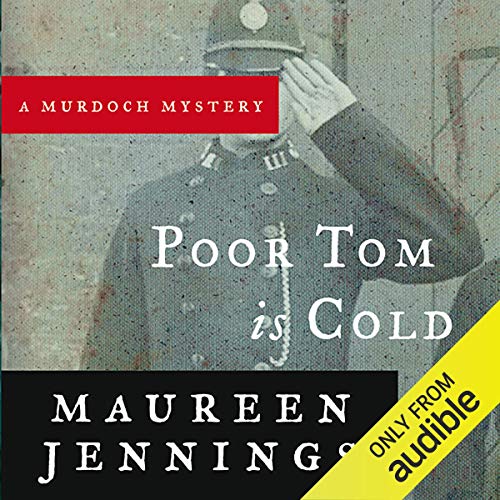 In this, his third adventure, the lovable detective William Murdoch becomes involved with the apparent suicide of Constable Oliver Wicken, a man who was the sole support of his mother and invalid sister. But further investigation by Detective Murdoch takes him far afield, and he begins to suspect that the Eakin family, whose house adjoins the one where Wicken died, is more involved with the case than they admit.

Whether describing a tooth extraction, the unquestioning prejudice toward the few Chinese immigrants in the city, or the well-intentioned but bizarre treatment of mentally ill women, Maureen Jennings, once again, brings the period vividly to life.

“Jennings has a wonderful feel for the places and tasks that give life and context to a character.” ( New York Times Book Review)
“Readers are given a vivid, heart-wrenching picture of the poverty of many in Victorian Toronto.” ( Publishers Weekly)

What listeners say about Poor Tom Is Cold

I'm enjoying this entertaining series. Jennings has mastered the right balance of plot, character and setting. The narrator is pleasant and easy to listen to. Thoroughly recommend this book and author for fans of period crime mysteries.

No. 3 in the Detective Murdoch series, Toronto

This is the third in the series involving 1855 Canada. Detective William Murdoch becomes involved with the apparent suicide of Constable Oliver Wicken, a man who was
the sole support of his mother and invalid sister. But further investigation by Detective Murdoch takes him far afield, and he begins to suspect that the
Eakin family, whose house adjoins the one where Wicken died, is more involved with the case than they admit. We read about a tooth extraction (done with the newly in use laughing gas). We read of the
prejudice toward the few Chinese immigrants, a prejudice which makes Chinese witnesses, such as a laundry owner, unwilling to come forward, and the treatment of mentally ill women, which leads to the disbelief in a woman regarding what she knew and saw. This is a great addition to the series introducing us to a possible romantic interest for Detective Murdoch but with some complications, and the continued presence of the other lovable characters already introduced, such as the family he lives with and rents from.

Wish the book was narrated by several people men and women voices. But pretty quickly you get into the story which is excellent. And then you get used to the (male) narrater's different falsettos and accents used for the various characters.

Love Murdoch Mysteries and the books are a great addition whikeI wait for the new season.

We have tried 3 of this series, ever hopeful it would get better, since we love the TV show.
This is the worst yet. I won't do another, and I will return this one.

With a good editor, this would have been 5 stars!

The germ of the story is good, but it would be MUCH better if there had been an editor with a sharp pencil. Lots of detail to be sifted. Many story threads, some with no relevance to the plot and others cut off with no satisfactory resolution. The overall tone is dark, and the dialogue often unduly coarse and vulgar. Thank goodness the creators of Murdoch Mysteries lifted this out of the swill and focused on story rather than atmosphere. I was hoping for some spin on that favorite, but this isn't it.

Although entirely different in flavor from the Canadian TV series which I
adore, I find this Murdoch equally enjoyable though more a 'standard' mystery experience. The characters are well drawn and the mystery involving. Narration is done well.