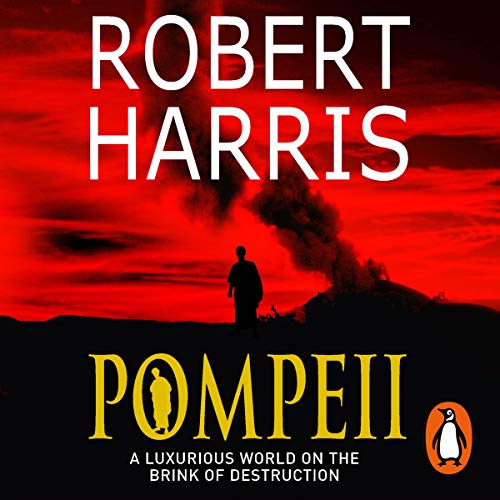 A sweltering week in late August. Where better to enjoy the last days of summer than on the beautiful Bay of Naples? All along the coast, the Roman Empire's richest citizens are relaxing in their luxurious villas. The world's largest navy lies peacefully at anchor in Misenum. The tourists are spending their money in the seaside resorts of Baiae, Herculaneum and Pompeii. Only one man is worried.

The engineer Marcus Attilius Primus has just taken charge of the Aqua Augusta, the enormous aqueduct which brings fresh water to a quarter of a million people in nine towns around the Bay. Springs are failing for the first time in generations. His predecessor has disappeared. And now there is a crisis on the Augusta's sixty-mile main line - somewhere to the north of Pompeii, on the slopes of Mount Vesuvius.

Attilius - decent, practical, incorruptible - promises Pliny, the famous scholar who commands the navy, that he can repair the aqueduct before the reservoir runs dry. But as he heads out towards Vesuvius he is about to discover there are forces which even the world's only superpower can't control. Pompeii recreates in spellbinding detail one of the most famous natural disasters of all time. And by focusing on the characters of an engineer and a scientist, it offers an entirely original perspective on the Roman world.

What listeners say about Pompeii

Loved it, especially the ending.

I got lost a few times through the book as a it drifted between characters m but was still able to keep up and thoroughly enjoyed the book. Ending was fantastic.

What a delight. From its earliest, Pompeii takes the listener into this world. And it is so very familiar, which shouldn’t be a surprise. People and societies are, after all, scarily similar regardless of era. The narration is deliciously done too, with well crafted inflection and beautifully executed changes in tone, to indicate the different characters. Thanks for a great read and I feel, real insight into this most significant event in human history.

The characters are engaging and, with the impeccable research, bring the history alive. I wanted to know what had happened to those who managed to survive. The narration was excellent. I wish I had heard this before I visited Pompeii.

Loved everything about this book! great story.

A gripping story line that brings history to life. A great insight into the culture of the day.

Not revisited, but re-enacted

With his usual accuracy of detail and skill in storytelling, Robert Harris has allowed us to enter into what was one of the most horrendous and mind-altering events of Roman history. People of our century know Pompeii as a faintly gruesome historic tourist destination; Harris peoples it with inhabitants like us. His use of scientific volcanic quotations and facts about water engineering is both fascinating and informative. Steven Pacey’s reading of the story is excellent.

Having always been fascinated by and eventually visiting Pompeii, this story is a fascinating perspective of imagination, primary and secondary sources. The descriptions and story line with a known outcome are entertaining.

What’s not to like. Robert Harris’ Pompeii rates with Lindsey Davis’ Falco series from an insight into the Roman world. Great narrator- five stars!

one of the most entertaining stories around...

unpretentious - well written - the characters are bang on - prose is economical - lovely english - just a really fun adventure thriller set in the ancient world - i.m.o. harris was at his best when he wrote this one - it's an absolute cracker

What a well performed story! For many years I have been fascinated with the tragic story of Pompeii. One can only imagine how horrific it must have been to experience it and die in such awful circumstances. The author created a believable fictional story, taking the reader into that time and keeping interest high.

I read the book a few years ago and have been wanting it in audio format for a while now. Well worth the wait although a few words are mispronounced in my opinion

A great story that allows you to glimpse the Roman world nearly 2000 years ago in a very realistic manner.

If only I had read this before I went to Pompeii

Having visited Pompeii recently, this was a must read. I wish I had read it before I went, I think I would have understood more about the people who lived there.

having visited Pompeii it was fascinating to imagine how this story could really have happened. Great level of detail, particularly around his water was so important. Romantic aspects slightly implausible but understood that something good has to come out of a disaster.

Illuminating look at Rome at its most interesting. Detail was superb and as far as I know, historically accurate and relevant, yet the narrative had a contemporary feel. I love Robert Harris- he spins a great yarn, and this was up there with his best.

Obviously the main protagonist was fascinating-all the other characters revolved around him very cleverly, giving a strong sense of a real person at the heart of the story.

Yes- when the young man was thrown into the pool of eels. There was a real sense of disregard for the feelings of him and those around him.

Made me want to read the others. Cicero is one of the most fascinating characters in Roman history and this was just an introduction to a huge story about him.

Keeps your interest in its historical context

I enjoyed this novel, as with all of Robert Harris' novels. Of course we all know what is going to happen, but the characters are brought to life such that we take a real interest in how they fare. Not overly demanding, but definitely entertaining.

I adored Robert Harris' Cicero trilogy and loved Pompeii as much. Harris weaves a spell. I have little interest in volcanos but now fascinated by Vesuvius and Pompeii. I also want to read more about Pliny the Elder. Highly recommend the book in every way, the story line, history and a bit of rommance thrown in. However sometimes the Romans were just horrible. The only downside.

I have listened to this 5 times and just about to start again, gripping read and historically sound

A great book that is superbly read by Steven Pacey and packed with historical detail.

love this book one of the best books I have ever read and now listened to, I could listen to it all over again and may just do that.