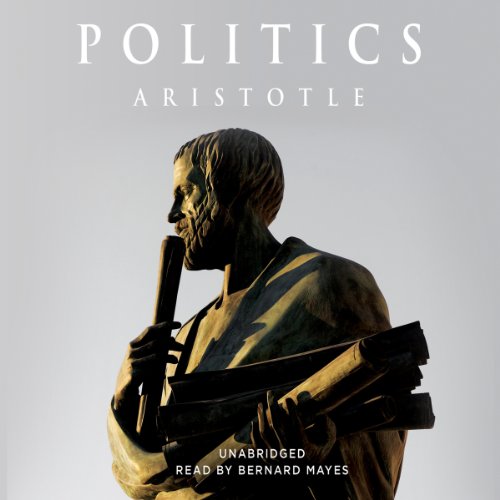 By: Aristotle
Narrated by: Bernard Mayes

Over two millennia after its compilation, the Politics still offers much to consider with regards to political science. Aristotle's succinct and thoughtful analysis is based on his study of over 150 city constitutions and covers the gamut of political issues in order to establish which types of constitution are best, ideally as well as for particular circumstances, and how they may be maintained.

Aristotle believed, as did his predecessor Plato, that an ideal constitution would be good in itself, in accordance with nature, and therefore is needed by man, 'a political animal', in order to fulfill his potential. Aristotle's thoughts on the subject became the foundation for further philosophical inroads on the subject made by St. Thomas Aquinas, Machiavelli, Jean Bodin, and Richard Hooker.

much more practical than the republic

A treatise which is both simple and all encompassing. It is not perfect, but nothing is.

This book is #1 for anyone interested in philosophy or politics, in any whatever sense. should be required reading in highschool. yes, it is absolutely full of uninteresting informatiin that isnt totally relevant anymore, but there are a good deal of original concepts that shoukd stand at the fore of any ideological mindset.

basically, if you DONT read and study this, youre just a petty slave in my mind.