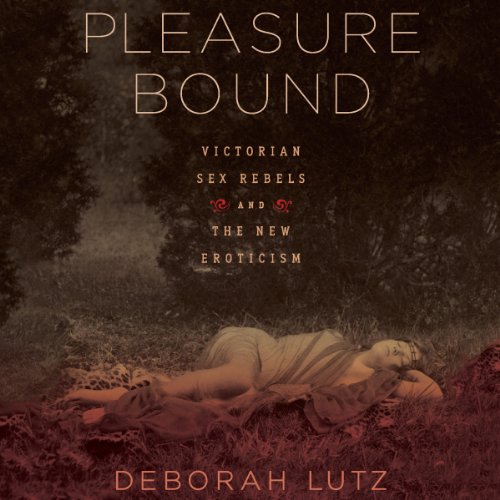 In this stunning and nuanced exposé of the Victorian London we thought we knew, Deborah Lutz takes us beyond the eyebrow-raising practices of these sex rebels, showing us how their work uncovered troubles that ran beneath the surface of the larger social fabric: the struggle for women's emancipation, the dissolution of traditional religions, and the pressing need to expand accepted forms of sexual expression.

What listeners say about Pleasure Bound

Maybe an OK book, but ruined by the sound

I purchased this book sometime ago but couldn't remember why I did not persevere with it. After viewing the wonderful Love and Desire exhibition at NGA, I tried again. Maybe there was something wrong with the audio engineering, but in places it sounds as if the reader has read every individual word out of context and then the narrative has been spliced together. To my ears, it is completely unlistenable. I don't like to blame the narrator, it seems much more to be a technical or editing issue. And I have deleted it, and downloaded it again to make sure it was not a fault in the original download. Very very disappointing.

The content is very interesting, however the start stop, improper cadence of the reading makes it impossible to enjoy. I’ll buy the book and read it myself. The producer should be dismissed!

This title deserves a read, but perhaps only if you are deeply interested in Victorian sexual history in the 1860s and 70s. The content is fresh and interesting, but the author tends to repeat herself in areas, talks down to you, and the governing thesis does not move further beyond the typical display of academic description (waffle, waffle). One big problem i had was the relationship between the prose and the performance. They combined to make the work unbearably snobby in style. Nevertheless, you're not going to find much more to listen to on Victorian sexuality.

Well worth a listen!

If only to find out more about the world of the Pre-Raphaelites this book is well worth reading. The author always takes into account the mentality of the era and refrains from projecting the present mores into her interpretation of the epoch. This is essential in trying to grasp how these people understood their world and how they were also curious about other cultures in distant lands and how they tried to make links about their own world from the anthropological observations they made. Although a lot of the book does concentrate on attitudes of the time to sexuality it also reveals many other preoccupations of the time too. I particularly enjoyed the opening chapter which discusses the Victorian obsession with death and illness and how it inspired artistic creation. It also enabled me to discover more about Swinbourne and Richard Burton the anthropologist and other figures of the time. I would highly reccommend this book. The narrator does have some strange pronunciation lapses at times but this is only a minor quibble and does not take away from the main narration.