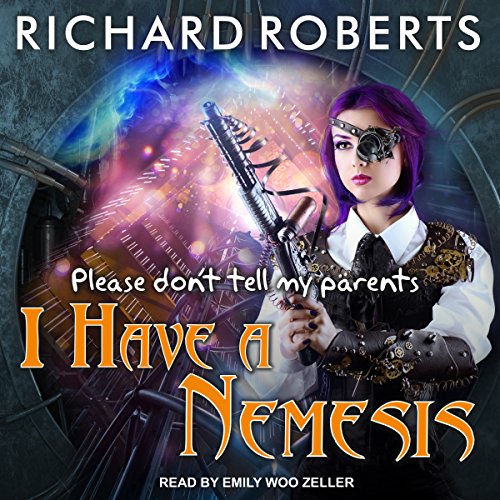 Please Don't Tell My Parents I Have a Nemesis

It's summertime for supervillains!

Or maybe not, because for Penelope Akk, there is still one foe she has yet to defeat: her own reputation as Bad Penny. It's been a fun ride: fighting adult heroes, going to space, and inspiring the rest of her school to open up about their own powers.

Sooner or later, that ride has to end, and with school out of the way Penny is hatching a mad scheme to end it on her own terms. Will that go smoothly? Of course not. Penny's left too many unsolved problems behind her already, like ghosts, seriously crazy friends, and angry little girls from Jupiter.

One by one, they'll have to be dealt with before she can do battle with herself. She'd better hurry, because her parents are closing in. Whether she confesses or not, this time they will find out her secret.

Interesting and a pivotal book for Penny

I loved the book and the narration.
The book describes how she got to pivotal moments and possibly setup certain things for the future!

This was an amazing series, but when is the next book if there is one? I NEED IT

This is another in the series. It is VERY lite on the Inscrutable Machine, and villainy in general. Yet it was entertaining with solid character development and a nice twist I didn't see coming. Not the adventure that previous incarnations were, though the pace moves along well and it did hold my interest.
It did feel like it was placeholder though. Very much like the author started out not being sure if he wanted to go on and then deciding he did.

Another wonderful book. My son and I continue to listen together to the tales that Richard Robert weaves. Emily Woo Zeller should not be counted out here. She brings every character to life and really makes you feel for them. Fun listen for the whole family! “AUDIBLE 20 REVIEW SWEEPSTAKES ENTRY”

Book 4 with Penny and the gang and I cant find it in me to complain. Most familiar faces return for at least a scene or two and the ending left me looking forward to whenever book 5 comes around. On the slight downside it is not the greatest book to just pick up on its own without reading the prior books.

good book. but it.

title says it all, now for some nonsense....the end blue red ag the world ends to we do not know.

This is a good story. It has a great plot line, plot twists, and rebellion. I only gave it a 4 because this story is NOT for people under 8/9/10. Great story, though.

Good until near the end is super sad 😢😢😢 but very good 👍and nice in the beginning.

Just gets better and better

So far each book has been better than the last. I can’t wait for the next one!

Story is good narrator is awesome. don't know why you need to have 15 words here ?

damn it, a cliffhanger.

a really enjoyable story with a good narrator. hopefully the next book will be the last one.

The story left me hungry for more.

The world entire story was brilliant as a fourth I loved it. The ending made me tell " I have to wait a year for the next book? Noooooooooooo!"