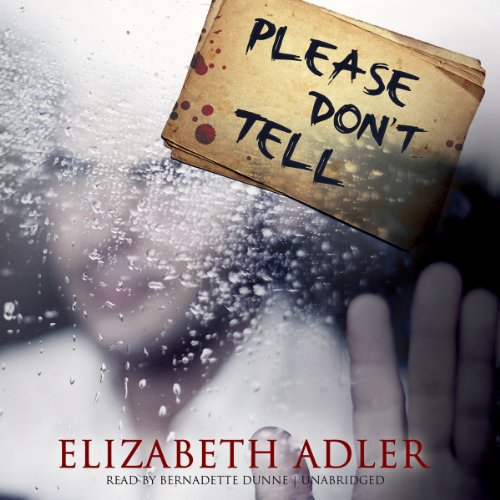 Fen Dexter's quiet life on the idyllic California coast is interrupted one stormy night when a blood-covered man shows up on her doorstep, claiming to have had a car accident. He tells her that he is on his way to San Francisco to help the police solve the murder of his fiancée. Unable to make it to the hospital because of the storm, he stays the night at Fen's, and the attraction between them is obvious. The next morning he heads to the hospital where Fen's niece, Vivi, is an ER doctor.

Vivi is treating the most recent target of a serial killer whose signature move is to leave a note saying "Please Don't Tell" taped across his victims' mouths. When Fen's mysterious stranger comes to Vivi to have his wounds stitched she agrees to set him up to talk with the police about his fiancée. Who is this man, really? What does he want with Fen and her family? And will they live long enough to uncover the truth? Told with Elizabeth Adler's knack for terrific female characters and breathtaking twists, Please Don't Tell will keep you guessing, right up to the end.

This book started out good. However, it changed once I realized it was more of a romance than anything. The characters were pretty one note and seemingly stupid. Also, if you're 30 years old and you refer to your anatomy as "downtown" than you need to grow tf up.

This is one of my most favorite serial killer mysteries. Narrator Bernadette Dunne does an excellent job of breathing life into these characters. I wish this book was part of a series. I don't want to leave ... I want more! Great characters, great book all the way through to the end!

Set in San Francisco & Big Eur, this well written, fast paced mystery has enough twists & turns to keep you listening well into the night. Great characters from the very stable Doctor Vickie to her query sister to hard working detectives they are all quite believable . Enjoyed it thoroughly & will be looking for more books by this author, Elizabeth Atler.