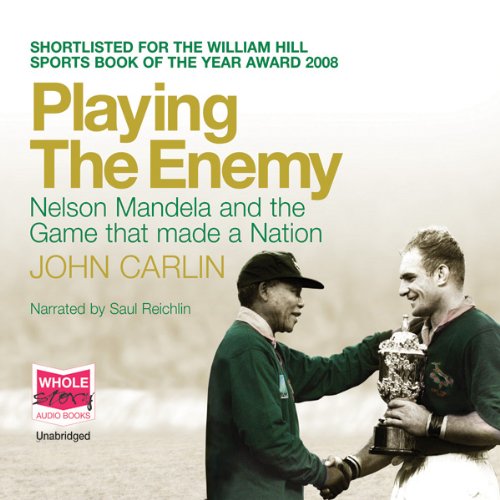 Ellis Park in Johannesburg, 24 June 1995. The Springboks versus The All Blacks in the Rugby World Cup final. Nelson Mandela steps onto the pitch wearing a Springboks shirt and, before a global audience of millions, a new country is born. This book tells the incredible story of Mandela's journey to that moment.

As the day of the final of the 1995 Rugby World Cup dawned, and the Springboks faced the All Blacks, more was at stake than a sporting trophy. When Nelson Mandela appeared wearing a Springboks jersey and led the all-white Afrikaner-dominated team in singing South Africa's new national anthem, he conquered white South Africa.

Playing the Enemy tells the extraordinary human story of how that moment became possible. It shows how a sport, once the preserve of South Africa's Afrikaans-speaking minority, came to unify the new rainbow nation, and tells of how - just occasionally - something as simple as a game really can help people to rise above themselves and see beyond their differences.

What listeners say about Playing the Enemy

So good, I listened twice.

I've been listening to a couple of titles a month since December 2007 and this is the most moving audiobook of them all. I decided to listen after watching the film 'Invictus'. That's a great film, but this is so much more.

This book provides real insight into the people involved in the creation of the modern South Africa, as it's based on personal interviews with them, including Mandela.

I realise South Africa isn't perfect and there are many challenges for it to overcome, but this book, at moments, really filled me with joy. As I look at the conflicts in the world today, it provides real hope that if South Africans can tackle the problems of apartheid, without a bloody civil war, then it's possible other countries can also find resolution and peace.

As for Mandela, as John Carlin points out, he's not a saint. But, it is his behaviour as a human being, who treats all people with respect, which I found so inspiring.

Hats off to Saul Reichlin for his impressive narration and characterisation of the voices.

I read John Carlins original book in hardback when it came out and enjoyed it so that I went straight out and read a long walk to freedom..
This is the first time I've listened to an audiobook version of a book I've read. Boy am I glad I got the audiobook as well.
The Narrator is fantastic he really brings all the characters to life, even doing a decent impersonation of Desmond tutu.

my initial interest was in the rugby, and rugby addicts may find some of the rugby explanations a little over simplified, eg even though NZ were overwhelming favourites, South Africa were still genuine contenders for the world cup, not rank outsiders as stated in the book., also making out Joost VdW was a "small lightweight player" in painting the picture of his famous tackle on Lomu. There is also no mention of the all blacks alleged food poisoning, But these are trivialities in the great scope of the book.

For me RWC final 1995 stands alongside the Rumble in the jungle in terms of sporting events that have transcended the sport itself and actually become part of history.

There is so much to commend this audiobook, As a welsh rugby fan I was completely able to identify with the stories relating to Die Stem, Nkosi sikelele afrca and shosoloza. Can you imaging trying to persuade a Welshman to sing swing low sweet chariot.

Its no surprise that Hollywood has turned it into a movie, it has everything.

The only people who might not enjoy the content are die hard supporters of Margaret Thatcher and Ronald Reagan (enough said!)

unlocks the secrets behind the man who figured out how to build his nation. witness the birth of South Africa

This book had me riveted and brought me to tears, it is without doubt the best audiobook I have listened to. It has everything – a true story which could be straight from a Hollywood script writer, a hero who fights adversity, a great cast of characters and wonderful prose. To top it off it is read by Saul Reichlin who does an incredible job.

The first part of the book focuses on the time from initial discussions between Mandela and the government through to elections, the second part focuses on the Rugby World Cup. I started having already listened to Mandela’s autobiography and obviously knowing the outcome of the World Cup. However, the writers approach in weaving individual’s stories kept me riveted. The focus of the book is on Mandela and his style but the writer has interviewed many people from all walks of life who were involved, or impacted, by both Mandela and the South African team’s victory. It is this approach which worked for me. Direct quotes describe the impact of the changes in South Africa e.g. from a white SA rugby player explaining how listening to a song from prisoners on Robben Island reduced him to tears, from a white politician explaining how Mandela persuaded him not to carry out a coup against the new power-sharing government and many other such tales.

This is a must listen for anyone with an interest in modern South African history, who wants to understand the impact of sport or who just wants a damn good story !

This is not a dry history book. It tells the story of Nelson Mandela extremely well, with lots of detail and insight. It tells a remarkable story.

The narrator is brilliant, capturing not only the tone of the book, but succeeding in dealing with the names and accents of the people in the book. I wish Saul Reichlin would do a reading of 'Long Walk to Freedom' or 'Cry the Beloved Country'.

A much deeper look into...

This is a deeper look into the creation of the rainbow nation of South Africa.

Even though the book is written from a specific perspective - it certainly offers a very blunt and often visceral story which I found scintillating.

Get the book instead...

Interesting angle on a well-known series of events. Always difficult to reduce a complex situation into a simple story, but while annoying, this is not a fatal flaw. I enjoyed the book, had to grab the tissues, and recommended it to others. Much better than the film. The truly annoying part was the narration, with an ill-considered attempt to give every person a different voice in a fake South African accent. It was passable at first but eventually the accents just became caricatures, which made me wince. And I lost it when he repeatedly called Tokyo Sexwale “sex-wale” (“se-kwa-le” would be closer). If you’re going to narrate a book, at least google the pronunciations of key names?

He could walk on water

What a fantastic book, brilliantly written covering the whole aspect of Nelson Mandela and the ANC struggle against the vicious South African apartheid.

The dignity and understanding of the man comes across in waves and how he held the ANC together after his release when the South African state tried to destabilise the situation by supporting the Inkatha to attack the ANC supporting townships.

Listening to the final chapter about the Rugby World Cup was very intense and even though you knew the result I was waiting for the final whistle. Brilliant.

I am older enough to remember many of the incidents mentioned and I am ashamed that Thatcher refused to support the ANC in their call for sanction.

I followed up the book by watching a two hour documentary on you tube which was of immense interest.

What a book. Buy it.

A fascinating story but spoiled by swathes of hyperbole and irrelevant details that did little to engage the listener or move the narrative forward. Odd narration but with some passable passages of South African accent.

A great biography of a great man, a real insight into how South Africa changed with the help of Nelson