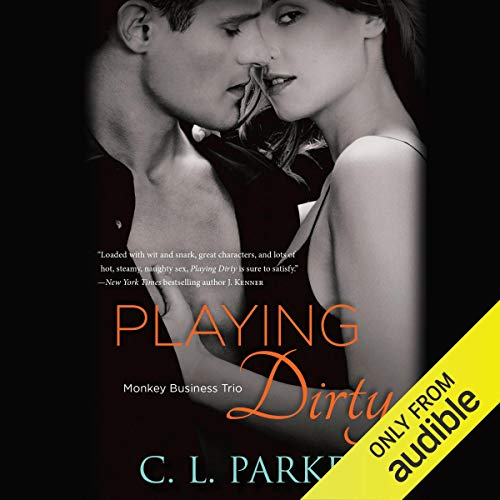 For fans of Bared to You and Beautiful Bastard comes the start of an irresistible new series in which competition is the ultimate seduction.

Shaw Matthews plays to win, and he intends to snag a coveted partnership at San Diego's hottest sports agency by signing America's top athlete. Only one woman stands in his way: rival agent Cassidy Whalen. But eliminating the competition will be Shaw's pleasure when he concocts an ingenious plan to seduce Cassidy and show the beautiful ballbreaker who's the better man for the job. That is until Cassidy turns the tables - and their steamy encounters start breaking all the rules.

Cassidy has worked hard to make it in a man's cutthroat arena, and she isn't going down without a fight, not even against the six-two alpha hunk whose rock-hard body awakens desires she's never known before. As Cassidy shares night after night of unending passion with Shaw, the game begins to change. Now Cassidy stands to lose everything - unless a fiery contest of wills can become a winning proposition for two people who keep raising the stakes.

What listeners say about Playing Dirty

I love C.L. Parker but come on!!! The cliffhanger at the end was totally not expected!! Hopefully the remaining books in this series will come out quickly!!!

Loved it BUT A MOTH/;()$ CLIFFHANGER

This book was really good start to finish hot sex great dialogue but a cliffhanger. Just get it.

What a fun romantic romp.Two sexually attracted people vying for the same job take competition to a whole new level by seducing each other to distraction,but what they didn't realize is that not only are they compatible in the workplace but also in the bedroom.Things get twisted,the gloves come off and the clothes go flying in this battle of wills.Can't wait for the next book.I thoroughly enjoyed istening to this book and having both a male and female narrator really helps take you understand and enjoy the story more.

CL PARKER has a way with words and writes snarky, funny dialogue like nobodies business. The story moves quickly and with each line you fall more in love with the characters. The narrators voices are well suited for the dialogue and i can feel all the emotions. I laughed out loud often and was sad when it ended. Also be warned it ends in a cliff- hanger. I can't wait for the next book Getting Rough.

Shaw was one of the most disagreeable male characters I have ever encountered in a "so called" romantic novel (he reminded me more of a sociopath or serial killer). Shaw called Cassidy a slut, whore, and words I can't repeat, while hitting, insulting, biting, & demeaning her. Most men would have been nicer to a common streetwalker.

Cassidy was supposed to be an intelligent, assertive, and professional sports agent. Yet she allowed herself to be degraded & mauled at work and literally f**ked by a nasty co-worker without a condom. Cassidy seemed to delight in being treated like a lower life form, getting off on crude & abusive words and sexual abuse.

story was hot and sexy, but all the characters do is argue. It was exhausting to listen to the anger in their voices and their constant arguing. The sex was super hot, but became very predictable. Cliff hanger. Don't appreciate that sort of ending and definitely not planning to get the next story and listen to more arguing.

What a romance story would be if written by a man

There was nothing romantic or loving in this book.

This book was a man degrading, insulting and abusing a woman with and about sex because he didn't like her competing with him at work. This book took 'boys will be boys' and escalated it to disgusting. This book took a woman who likes dirty talk and rough treatment in the bedroom and made her into a victim of someone who had something to prove. This book was sad.

I was so disgusted by the 3/4 mark, it was all I could do to finish it before writing this review and deleting the thing from my device. I will also be asking for my money back and not finishing this series.

Where does Playing Dirty rank among all the audiobooks you’ve listened to so far?

this is definitely one of my top five

What was one of the most memorable moments of Playing Dirty?

The first time in the alley

What does Brian Pallino and Muffy Newton bring to the story that you wouldn’t experience if you just read the book?

I always love when there's two narrators. A woman and a man it brings the characters of the book alive and these 2 did a great job

yes ,I did and it involves calling my boyfriend

this is the roughest hottest couple.. Great book cannot wait for book 2

I love the story but NOT the homosexual parts

Where does Playing Dirty rank among all the audiobooks you’ve listened to so far?

This book ranks up there with the best, although the homosexual parts in the story, in my opinion, takes away from the story, I love the idea of truth love between a man and woman..........

Have you listened to any of Brian Pallino and Muffy Newton ’s other performances before? How does this one compare?

I love Brian Pallino's voice and the way he brings the characters to life. I believe this was my first time hearing Muffy Newton and I was please with her performance also.

This novel made me laugh and a was very teary eyed when Shaw fell into the ocean, I had a great fear he would be lost.....