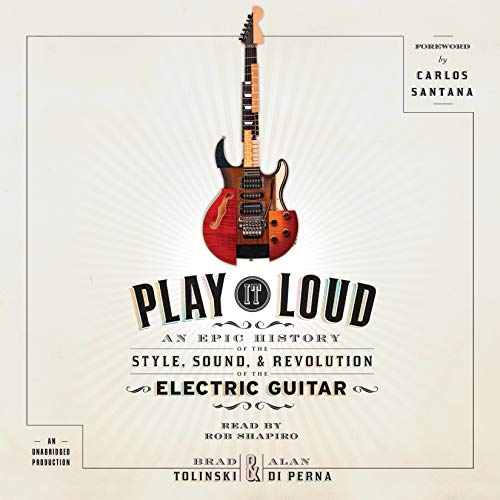 For generations the electric guitar has been an international symbol of freedom, danger, rebellion, and hedonism. In Play It Loud, Brad Tolinski and Alan di Perna bring the history of this iconic instrument to roaring life. It's a story of inventors and iconoclasts, of scam artists, prodigies, and mythologizers as varied and original as the instruments they spawned.

Play It Loud uses 12 landmark guitars - each of them artistic milestones in their own right - to illustrate the conflict and passion the instruments have inspired. It introduces Leo Fender, a man who couldn't play a note but whose innovations helped transform the guitar into the explosive sound machine it is today. Some of the most significant social movements of the 20th century are indebted to the guitar: It was an essential element in the fight for racial equality in the entertainment industry; a mirror to the rise of the teenager as social force; a linchpin of punk's sound and ethos. And today the guitar has come full circle, with contemporary titans such as Jack White of The White Stripes, Annie Clark (aka St. Vincent), and Dan Auerbach of The Black Keys bringing some of the earliest electric guitar forms back to the limelight.

Featuring interviews with Les Paul, Keith Richards, Carlos Santana, Eddie Van Halen, Steve Vai, and dozens more players and creators, Play It Loud is the story of how a band of innovators transformed an idea into a revolution.

"It's all here: everything knowable now becomes known about the plugged-in ax that changed the world. A comprehensive history of the electric guitar in cultural context is something long wanted, awaited, and needed. At long last, it has arrived." (Billy Gibbons, ZZ Top guitarist/vocalist and Rock and Roll Hall of Fame inductee)

If you love the guitar, this is a must read book.


In all honesty, I was apprehensive about reading this book. I thought I knew all there was to know about the history of guitar and it’s glory days. Man, was I wrong.
What an enjoyable journey it was to read. If you love the guitar, either as a player or collector or listener, this is a must read book. Enjoy it

Great listen. Amazing how relatively new the electric guitar is and how well Leo Fender and Les Paul knew each other while they both developed their guitars.

Where does Play It Loud rank among all the audiobooks you’ve listened to so far?

It's definitely one of the best music oriented non-fiction books available.

All the people, guitars and events in the book were very interesting.

Which character – as performed by Rob Shapiro – was your favorite?

It would have been great if it also included audio clips of the guitars and music referenced in the book. For example, it would help to hear the difference between a single coil vs humbucking pickups, a Gibson Les Paul vs a Fender Strat, sample riffs, techniques, etc. I would buy an updated version of this audiobook if it included all the musical, audio examples described in the book.

I liked it, didn't love it.

I wanted to love this book. I really did. The author did a good job of trying to hit several genres and talk about gear. Here's the things I liked:

-Good stories on the origins, Fender, Gibson, off brand guitars, gear in general. Some of the artists were really worthy of the extra time he spent on them.

Here's what made me dissappointed:

-A full hour talking about Bob Dylan. Come on man, sure he made waves when he switched to electric but arguably his best music was when he played acoustic folk.
-2 hours on Jimi Hendrix? I'll admit he is arguably the best guitarist of all time but he was really big on the scene for about 3-4 years. No one can deny his impact but the coverage was excessive.
-1 hour on Jack White and his junk guitars? Give me a break.
-1 hour on Steve Vai? A knock-off Eddie Van Halen
-One sentence mentions of BB King, Jerry Garcia (who was a huge gear-head when it came to his guitars), Duane Allman (whose only mention was that he bought a guitar on credit), Stevie Ray Vaughn, etc.??

I know the book could be 30 hours if he gave all of the worthy guitarist their due space. I just did not understand some of the picks and the immense amount of time the author spent on them. If your looking for a good history on the guitar then half of this book has a lot of the pertinent information. The other half is fan-boy fawning over the author's pet artist. Narrator was excellent by the way.

Over The Top Good!

A well researched account of the history of the guitar from both the musicians and craftsman perspectives. I’m on my second read.

If you are into guitars this is a good book.
Two things that would make this a great audiobook:
Faster voice (you can actually achieve this through the app by setting speed to 1.25)
Second, include sound bytes of the actual artist playing the guitar in mention.

Excellent Power Chords in Every Key!

Almost perfect book that sheds light on almost every facet of electric guitars!

If you play electric guitar, if you have an interest in music history, if you like stories of self made geniuses GET THIS BOOK NOW!

Funny because I have been buying some semi vintage guitars recently and now discover the sellers were quoting THIS book to impress me with their knowledge!

My only gripes would be is it doesn't go into concert sound and contributions of Owsley Stanley. Should have been at least a page or two.

Also could have been a bit about the evolution of effects pedals etc... and the extremes say David Gilmour have taken tone.

It opted for a more rounded approach incorporating some modern players take with is 100% legit! I'd remove nothing but only add those components to flesh it out a bit more!

Over all one of the best listens (I have well lover 100 audio books and rank this top 5!) and I'm starting it all over again right now!

listen to this while I'm tinkering away in my shop

As I sit here in my shop building guitars I realize how much I absolutely have no idea what I'm doing. But I love it! I'm just tinkering away in my shop listening to this and I can't say this often but, I know that I'll re listen to this book again. What a great and wonderful history of a music instrument that has changed my life and so many more.... arguably it has changed the world. Some say that the guitar is dead. I know this to be false with 100% certainty. because like me sitting here at 11:30 at night while my kids sleep, I'm meticulously cutting frets in to a neck that will one day make music.
This book is inspiring. I know when I build a guitar that I'll never be Les Paul or Leo Fender but what I do know is there something magical in a guitar. It's almost indescribable. When you make something with your hands and then handed to somebody and they're smiling from ear-to-ear because they get it.... it's music.
If you love music. If you love the guitar. If you I love rock and roll..... go ahead download this book and prepare yourself to learn about the wonderful rich history of the guitar.

Tolinski writes and reads with the gusto of a true lover of the guitar. His insights and stories chosen to tell this tale are well selected and extremely illuminating about the history and development of the electric guitar, from its early years as a gimmick to an accepted instrument to the prevalent item in Rock and Roll. Hearing the stories about Les Paul, Leo Fender, Ted McCarty and more helped me to understand how the guitar business is today. A great book for guitar lovers.

My best ever listen

I have been an Audible subscriber since pre-amazon; since the beginning. I am a fan of any audiobooks narrated by Rob Shapiro and I loved the presentation of this book.

the narrarater did a great job. the facts n history of guitars were on point. this book is very informative on guitar and music genre births.

kinda meandered but gave me some new perspective on some important guitarists and some guitars.

This book allows you to tell the overblown "rock star" in your band, that he's wrong. It's an education, and well worth hearing.

No. Too much to memorise!