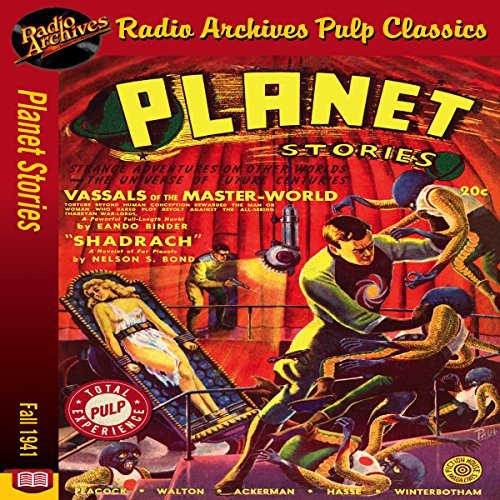 Total pulp experience. These exciting pulp adventures have been beautifully reformatted for easy listening as an audiobook and feature every story, every editorial, and every column of the original pulp magazine.

During the science-fiction boom of the 1930s, there were more than a dozen pulp magazines dedicated to the subject. Analog, Startling Stories, Amazing Stories, Wonder Stories, Captain Future, and Super Science Stories were just a few. In 1939, the pulp magazine publisher of Jungle Stories, and many others, added its own entry into the sci-fi field, Planet Stories. Until it folded in 1955, it published ground-breaking science fiction from some of the genre's brightest stars. Planet Stories returns in these vintage pulp tales, reissued for today’s listeners in electronic format.

A complete planet novel: "Vassals of the Master World" by Eando Binder

"The Raiders of Saturn’s Rings" - Novelette of other worlds by Raymond Z. Gallun

Only one man could save Titan’s Earth colony from the merciless Callistans.

“Shadrach” - Novelette of other worlds by Nelson S. Bond

"The Victory of Klon" - Short story by Wilbur S. Peacock

"The Star of Satan" - Short story by Henry Hasse

For eons, a dead man kept silent vigil on the barren, ghostly asteroid.

Between Propontis and the homesick Earth youth lay the deadly Avis gladiator.

"Spawn of the Venus" - Short story by Sea Harry Walton

What was this multiple-life monstrosity that rose from Venus’ sea?

“Who is Bond; what is he, that all his fans adore him?”

Where the customers bare their kicks and toss their bouquets.

These exciting pulp adventures have been beautifully reformatted for easy listening as an audiobook. Radio Archives Pulp Classics line of audiobooks are of the highest quality and feature the great pulp fiction stories of the 1930s to 1950s.